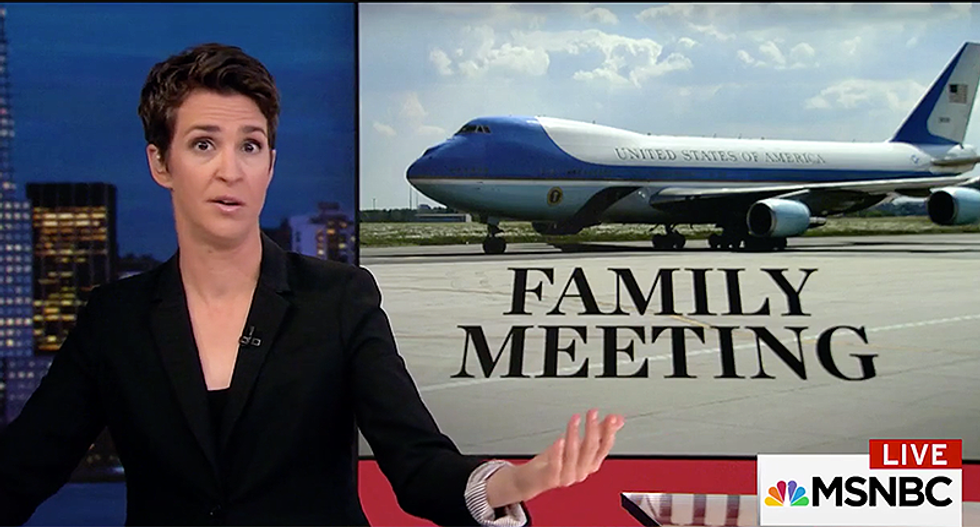 MSNBC's Rachel Maddow called out Vice President Mike Pence as well as a slew of others in President Donald Trump's White House who might be in special counselor Robert Mueller's crosshairs.

While recapping Donald Trump Jr.'s testimony to the Senate Thursday, Maddow noted that it was now accepted and admitted fact that the Trumps put out a false statement saying the meeting in Trump Tower was something other than what it was.

"That's obviously mendacious, right, but is it criminal?" Maddow asked. "It seems clear from the conceded facts that the president was personally involved in concocting a statement about that meeting that attempted to disguise the true nature and purpose of the Trump Tower meeting. To make it seem like something other than his campaign seeking Russian government assistance for their efforts against Hillary Clinton in the presidential campaign.

She explained that this statement seems to be something Mueller is focusing on.

"That's really bad news for the president," Maddow continued. "That means the special counsel has a veritable pu pu platter if that's the stuff he's running to ground. If that's what he's investigating, efforts to mislead the public about contacts with Russians, there's a lot to choose from if that's what the special counsel is going to be running to ground. If there's potential criminality, there are a lot of misleading the public, creating a false pretext-type statements that have been made about Russia by members of the trump campaign and the Trump administration. A lot of them."

"Mike Pence did bluntly asserted multiple times that there had been no contacts between the Trump campaign and Russians during the campaign," Maddow recalled. "That was false. Mike Pence's bluntly asserted that Trump national security adviser Mike Flynn had never talked to the Russians about sanctions. That was false. Mike Pence bluntly asserted that he had no idea Mike Flynn had foreign business ties, even though Pence was running the transition when the transition was notified multiple times in writing and in person by Flynn's lawyers that yeah, Flynn had foreign business ties."

She went on to say that Pence even said that Trump fired the FBI director because of the Justice Department recommendation, which we now also know is false because Pence was in the room when Trump read his letter explaining that he wanted to fire James Comey because of the Russia investigation.

"And that's literally just the stuff we know about the vice president in terms of the lies that we know he has told specifically about Russia and that's just the ones I can come up with off of the top of my head," she said. "Give me a few days and I can give you quite a list."

She went further, saying that if the CNN report is correct that Mueller is investigating administration officials who have made misleading statements on Russia, the meeting at Trump Tower is probably a good place to begin to find those lies.

"Just keep this in mind," she continued. "Donald Trump's eldest son and namesake, Donald Trump Jr. still, today, was disclosing new contacts between the Trump campaign and the Russians that happened during the campaign. Still today we got new stuff. Today Donald Trump Jr., according to the statement that he made to the Judiciary Committee, today he revealed three new previously undisclosed contacts that he had with Emin [Agalarov]."

She closed by asking what else the administration and campaign officials are still not disclosing if they're giving new information even now.