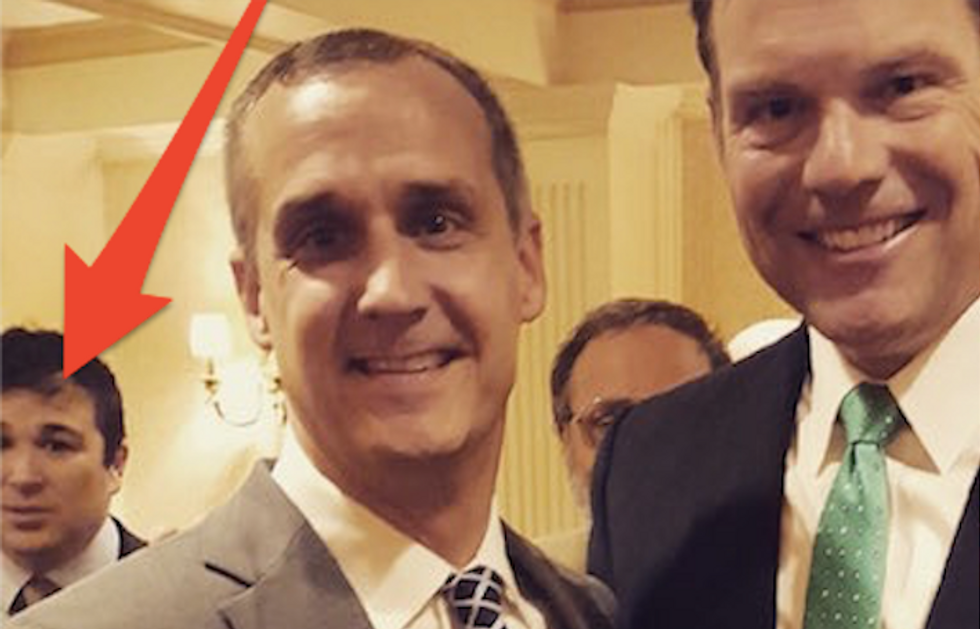 Kobach -- who is running for Kansas governor in 2018 -- posed for a selfie with former Trump 2016 campaign manager Corey Lewandowski and posted it on Twitter, but "behind both men, clearly visible, is longtime white nationalist Marcus Epstein."

In addition to being a regularly featured columnist at white supremacist site VDARE.com, in 2009, Epstein entered an Alford plea in Washington, D.C. after he was accused of drunkenly assaulting a black woman and hurling racist epithets at her and her husband.

"(An Alford plea is when a defendant maintains innocence but admits that the state has sufficient evidence to convict him and agrees to be treated as guilty.) Epstein satisfied the conditions of his Alford plea, withdrew the plea, and the charges against him were dismissed," Slate explained in an article earlier this year.

Epstein was a co-founder -- along with white nationalists Kevin DeAnna and Richard Spencer -- of The Robert A. Taft Club, a "monthly meeting group of traditionalist conservatives and libertarians in the Washington, D.C. area." Until its dissolution, the group's roster of speakers included former Texas Rep. Ron Paul (R), conservative social scientist Charles Murray and "modern day racist colonialist" Jared Taylor.

In late 2006 and early 2007, Epstein and DeAnna formed Youth for Western Civilization (YWC), a white nationalist student group whose alumni are now key figures on the radical right.

"The group’s chapters held a number of events on campuses across the country designed to stoke racial tensions, including erecting a mock border fence at Washington State University, and a organizing a 'Straight Pride Day' at Towson University in Maryland," said the SPLC's Stephen Piggott. "The Towson chapter was founded by Matthew Heimbach, a white nationalist who now runs the Traditionalist Worker Party, a group intimately tied to neo-Nazis and extremists."

Epstein worked closely with Pat Buchanan -- the GOP stalwart who was fired by MSNBC for racist remarks -- and former Rep. Tom Tancredo (R-CO), an anti-immigration zealot.

"In October 2015, Kobach was a featured speaker at the annual Writers Workshop put on by The Social Contract Press (TSCP), which regularly publishes the writings of white nationalists. Its journal, The Social Contract, has published four articles from Epstein," the SPLC noted.

(Correction: A previous draft of this story said that Epstein was convicted of felony assault. Raw Story regrets the error.)