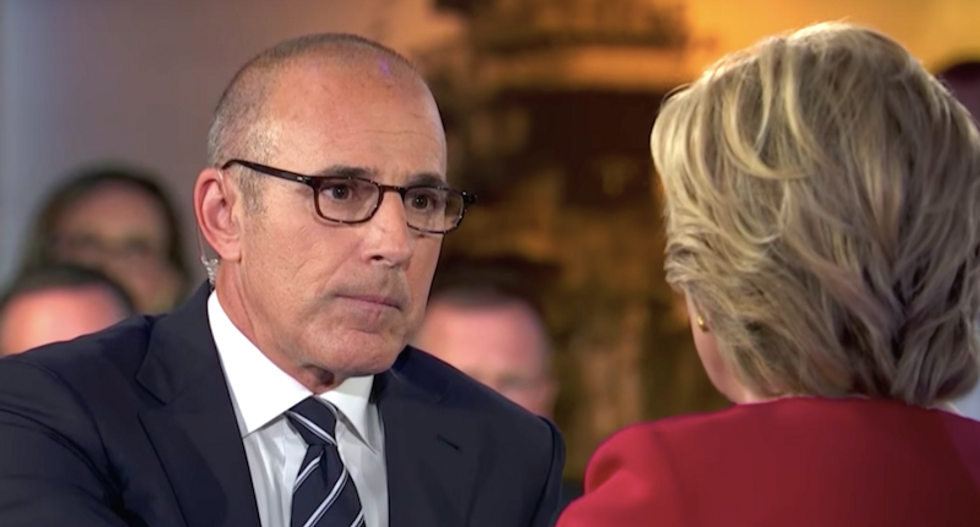 Matt Lauer's widely criticized handling of a forum-style debate between Hillary Clinton and Donald Trump has gained an ominous layer of context after his firing for an alleged sexual assault of a colleague.

The "Today" show anchor was abruptly fired after an NBC News staffer reported a complaint to network bosses, who announced his termination Wednesday morning, that Lauer had allegedly assaulted her at the Rio Olympics.

Lauer was pilloried by professional critics and social media users alike for opening the Sept. 7, 2016, debate -- which was hosted by a veterans group and ostensibly focused on national security -- by asking Clinton about her emails.

Trump had made Clinton's use of a private email server a focus of his campaign, and evidence has mounted since his election that Russia helped him promote the issue using hackers and social media "bots."

Lauer seemed to lob softball questions toward Trump -- who faced allegations of sexual misconduct throughout his campaign -- during his portion of the candidate forum, and repeatedly interrupted Clinton.

The now-disgraced NBC News anchor was also criticized for failing to challenge Trump's claims about opposition to the Iraq War and other topics, while following up Clinton's answers with probing questions.

Trump railed against Lauer on Twitter in wake of the news. Lauer was also featured in a "comedy" skit in which he appeared in his underwear and told his female colleagues, "Drink it in ladies!"