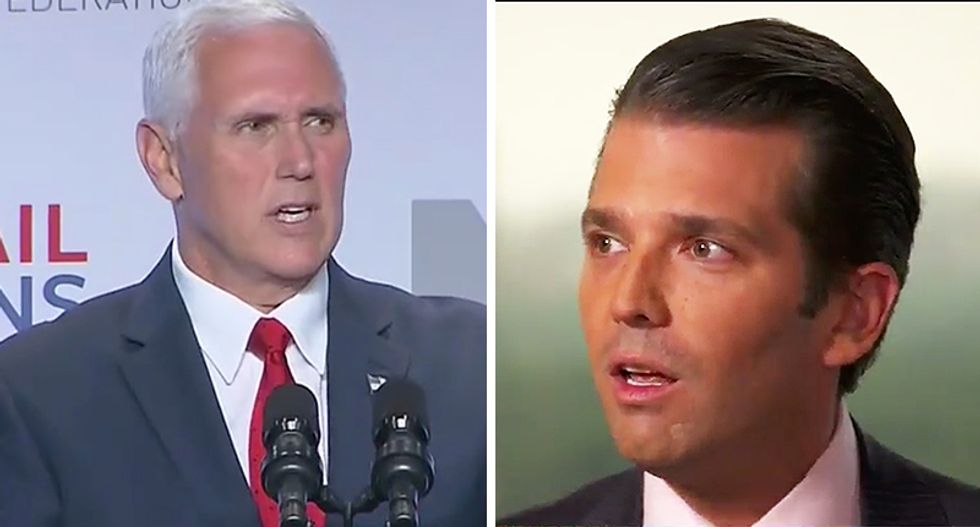 Pence claimed that he didn't know that Flynn was doing outreach to the Russians. Flynn was fired as Trump's national security adviser early this year after it was alleged that he misled Pence. However, Rangappa, who now teaches at Yale University on policy and national security issues, noted that the timelines don't work out in Pence's favor.

"Here's why it's problematic either way," Rangappa said, with regard to Pence knowing or not knowing. "The sanctions conversations were a matter of normal, incoming transition policy. If that's true, Vice President Pence is the head of the transition team and he's the incoming vice president. So, you would think he would know about policy discussions taking place. So, if he didn't know, then something about those conversations, if he's kept in the dark, something about those conversations was just not right."

Cuomo explained that emails prove that Flynn was discussing the Russian sanctions with other members of the team, which removes the idea that he "went rogue and was an outlier." He went on to say that it adds to suspicion. "If all of these people knew and it was going on during the transition, how did the head of the transition not know?" he asked.

Rangappa reiterated that fact was one of the more important questions.

"So, we know that in the pleading documents, the statement of offense that Flynn pleaded guilty to -- which means these are facts that [Robert] Mueller can actually prove that he was in communication with senior transition officials," she continued. "And exactly like you said, Chris, if he's in contact with senior transition officials about, policy decisions, how can the head of the transition team not know? If they were keeping him in the dark, why?"

Cuomo asked "so what," wondering why it matters or whether it goes to "poor incompetence, dislocation." He went on to ask why it becomes a concern of Muller's.

"It becomes a matter for Mueller because, again, if this is true that Vice President Pence didn't know, and this is all happening in some cabal of people underneath him, that makes it less ordinary," Rangappa told Cuomo. "We don't know yet exactly what that conduct was, but we know [acting attorney general] Sally Yates described it to [Don] McGahn as being problematic, and something that Flynn can be blackmailed about."

She went on to say that it's clear there is something alarming if the acting attorney general felt the need to tell the White House. She thinks Mueller will focus on that as well as those involved in the activity.

When it came to Donald Trump Jr., the national security expert said that he certainly has a lot of explaining to do.

"We are seeing the pattern where Don Jr. is kind of consistently very eager to receive dirt on Hillary Clinton," she continued. "So, it's getting more and more implausible that these are just accidental things` things that were not being solicited or not going somewhere."

Cuomo noted that it is unclear if a crime has yet to be committed. Russian lawyer Natalia Veselnitskaya has already given a statement indicating that Donald Trump Jr. was briefed by foreign policy advisor George Papadopoulos at some point prior to taking that meeting. It was revealed Tuesday that "dirt" on the Clinton Foundation was what he was searching for specifically.

Rangappa explained that there might not be a crime underneath it all. She clarified that to say there was "collusion" is simply a descriptive term to indicate a criminal act of conspiracy. "A conspiracy is an agreement to commit a crime. You can start to see the elements of maybe an agreement, but you still need a crime underneath it, and I think that is going to be problematic piece, in terms of what is Muller going to find there."