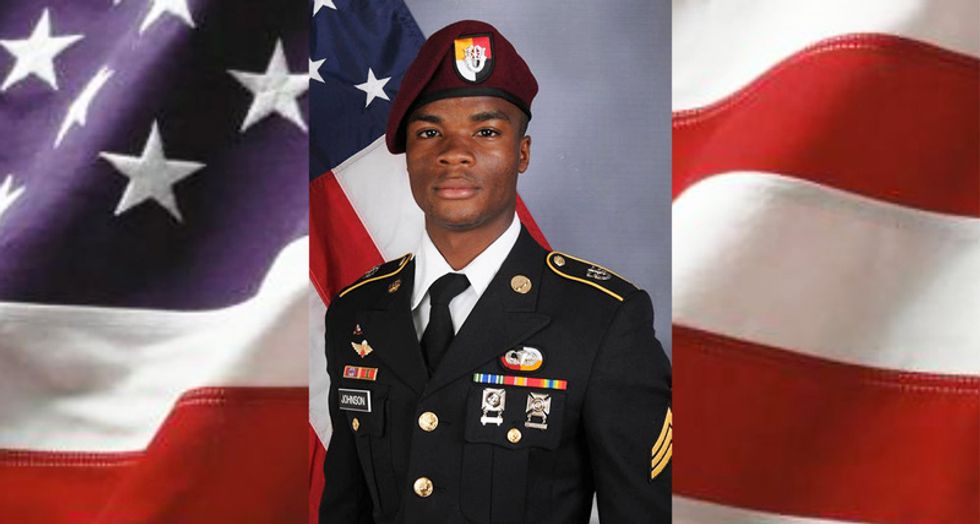 By chance, a reporter overheard military officials confirm that they believed Sgt. La David Johnson survived the initial ambush in Niger at the heart of a presidential controversy in October -- but never released that part of the mysterious story surrounding his death to the public.

In a report published by The Intercept, journalist Nick Turse said that during multiple calls to the United States Africa Command (AFRICOM) headquarters in Stuttgart, Germany on October 5 (the day before Johnson's death was confirmed), he was repeatedly hung up on. During one call, however, the person who answered the phone appeared not to hang it up correctly. He then overheard an hour of conversation among AFRICOM officials arguing about what to do regarding the then-missing soldier.

"The conversations I heard confirmed that the military said Johnson was alive the day after the attack," Turse wrote. Those conversations revealed that AFRICOM entered "embargo agreements" with journalists to keep them from reporting on Johnson until they were sure of his whereabouts, a move that is "not unusual" and is often used to protect the safety of soldiers involved in such attacks.

"'We’ve been able to talk a few off the ledge, but it’s gonna break. … By talking about it all you do is put this young man’s life, and those who are trying to help him, in further danger,'" a person likely to be AFRICOM's public affairs chief Col. Mark Cheadle said.

"Cheadle’s mention of talking 'a few off the ledge' appears to reference journalists who were considering reporting on Johnson," Turse wrote. "His reference to putting 'this young man’s life … in further danger' likely referred to the consequences of reporting that Johnson was thought to be alive and being searched for."

Among the journalists mentioned was CNN's Barbara Starr, who on October 6, the day Johnson's death was confirmed, said in a co-written report that the network "did not report the details of the search operation while it was ongoing and did not report the deceased service member’s recovery until CNN was assured that his family was notified."

The military's timeline of the ISIS ambush that killed Johnson and three other special forces soldiers, Turse noted, has changed considerably in the ensuing months since the October 4 attack, and the purpose of the mission and the events surrounding his death have also remained unclear.

"Several weeks after the attack, Gen. Joseph Dunford, chair of the Joint Chiefs of Staff, held a press conference at which he refused to definitively say whether the military believed or knew that Johnson had survived the initial attack," the report reads. Dunford and other military officials have repeatedly referenced Johnson as "missing" between October 4 and October 6.

Turse also claimed that the hoopla surrounding Johnson's death is far from the first time "AFRICOM has taken steps to withhold information and keep quiet embarrassing incidents and untoward activities by U.S. military personnel in Africa," including "drink- and drug-fueled deaths and the shooting of an officer by an enlisted man, to soliciting prostitutes and sex crimes."

Johnson's death and the still-unclear circumstances surrounding it made headlines earlier this fall after President Donald Trump was accused of disrespecting his widow by Rep. Frederica Wilson (D-FL), a close family friend of the Johnsons.