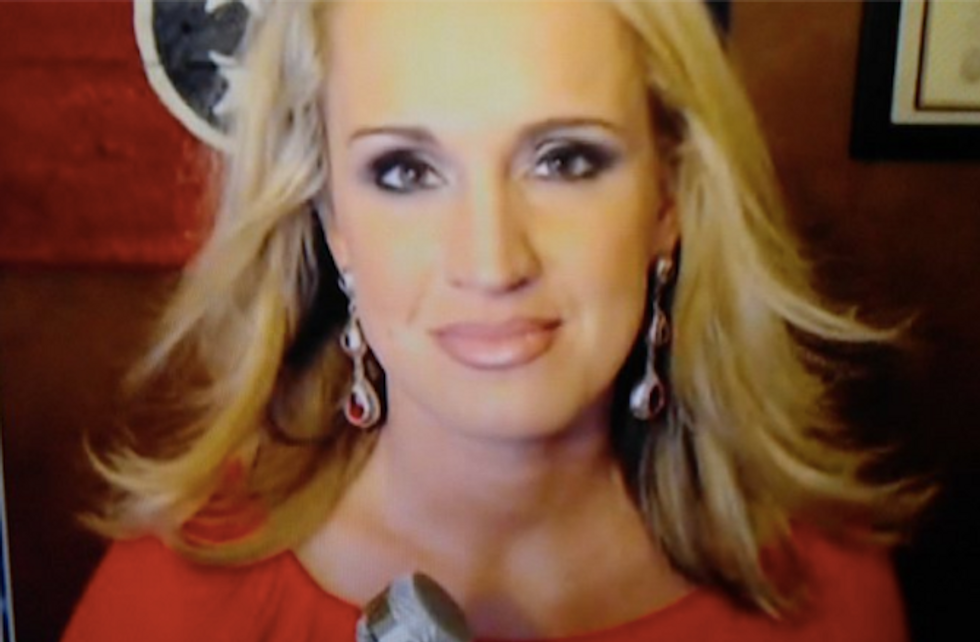 Scottie Nell Hughes came to most Americans' attention as a "say anything" surrogate for President Donald Trump during the 2016 election, but the Nashville, TN-based pundit is currently fighting a pitched battle against Fox News and the man who she says raped her, commentator Charles Payne.

Nashville Scene's Cari Wade Gervin profiled Hughes in a hair-raising article published Friday in which Hughes detailed her struggle to hang on to her "dream job" at Fox News, even as she faced daily acts of sexual coercion and misconduct by Payne.

"Hughes sued Payne and Fox News in September, alleging rape, coerced sex, sexual harassment and general discrimination she endured in order to maintain her appearances on the network over a two-year period," wrote Gervin. "The details of the events first came out in July, as Fox suspended Payne to investigate Hughes’ claims -- claims she says became public only because Fox, in order to damage her name, leaked a story to the National Enquirer alleging that Hughes and Payne had a consensual affair."

Fox claims that it has investigated the alleged incident and found no evidence of wrongdoing.

"The latest publicity stunt of a lawsuit filed by [Hughes' lawyer] Doug Wigdor has absolutely no merit, and is downright shameful," a Fox News spokesperson said in September. "We will vigorously defend this. It’s worth noting that Doug is Ms. Hughes’ third representative in the last six months to raise some variation of these claims which concern events from four years ago, since it apparently took some time to find someone willing to file this bogus case."

But Hughes insists she has presented "mountains of evidence" to Fox that contradicts the idea that she and Payne were involved in a consensual relationship.

Nonetheless, Payne has returned to the airwaves after a brief suspension and Hughes feels she has been left without allies.

"There has been silence or skepticism from many of the same liberal feminists who talk about believing victims," Gervin reported. "On the right, the reaction has been even worse."

For her part, Hughes said she is glad that more victims of predators and sexual abusers are coming forward, but that the constant parade of revelations is emotionally exhausting for survivors of rape and abuse.

“On one hand, I’m glad this is all starting,” Hughes said. “I’m glad that we’re identifying it in every industry. On the other hand, it’s so sick. It is sickening.”

She told Nashville Scene that her children are the reason she can't just walk away by the nasty allegations made against her by Payne and Fox. When the network attacked her and said that she was lying about the nature of her relationship with Payne, Hughes felt that her whole family was under attack.

“We got away, and then Fox raped me again in July, and they did it to my family,” Hughes said. “They’ve tried to destroy my family, and then people actually wanted to celebrate a family being destroyed.”

Hughes started to work with Fox in March of 2013, which for her was a dream job.

“That had always been my dream since college,” she said. “My father held up a sign in college, my graduation day, ‘See my daughter one day on Fox.’ Walking into that building that first time was just overwhelming. It was like a goal achieved. Not only did I achieve this goal now, I achieved it as a mother, as a wife, as someone over 30? And with a Southern accent? And I’m not a size 2? I did it! Everybody told me I couldn’t do it, because I didn’t have an Ivy League education, I didn’t have millions of dollars behind my name with a big PR firm. I did it just based on my merit, hard work and actually being really good.”

She met Payne when the two of them appeared on Sean Hannity's show as part of a panel. Payne was smitten with Hughes, but she said the feelings were not mutual. She considered him a friend and possible mentor in broadcasting. Payne wanted more, she said.

On July of 2013, Payne forced himself on Hughes in a New York City hotel room, she said, and thus began a campaign of bullying, sexual coercion and intimidation that went on for nearly two years.

A portion of Hughes' lawsuit against Fox says, "Because of Payne’s authority and power over Ms. Hughes, his acts of favoritism and preferential treatment affected her work assignments, compensation, treatment at Fox and evaluations of her performance. Ms. Hughes’s willingness to engage in sexual conduct with Payne translated into tangible employment benefits that would have been withdrawn from her had she refused Payne’s sexual advances. Indeed, each time that Ms. Hughes attempted to sever the sexual relationship, Payne refused and responded angrily and violently."

Hughes hid the relationship from her husband Chris Hughes, but in 2015, she came home to Nashville covered in bruises. Mr. Hughes demanded to know where they came from and she broke down and told him everything.

“He figured it out to a certain extent because of the bruises on me,” Hughes told Gervin. “He said, ‘Something is going on, something is not right.’ By the time I came home in May, I had to tell him everything that happened, because I needed help. I just needed somebody to -- I needed him to tell me, ‘We’re going to make it, even if we financially cannot afford it, even if hellfire condemnation comes down on you, we’re going to do this, we’re going to do it.’ I just needed somebody to tell me I wasn’t alone anymore.”

She packed up her New York apartment and headed home, then watched as her bookings on Fox shrank to almost nothing while Payne featured a slew of guests meant to send a statement to Hughes.

“When I left the show, Payne put on almost every single one of my closest friends in those months following. People who had never been on TV before," she said. "He even booked my former booking manager. He wanted to make sure I knew their careers were going to flourish at Fox, and mine was not because I got away. He also wanted them to turn on me, as several obviously did.”

What followed in 2015, Hughes said, was a nightmare. She and her family were strafed with violent threats and she felt she had nowhere to turn because the nature of the sexual bullying and harassment taking place at Fox News was not widely known.

"(N)obody knew the hell that was going on in that building at that point," she said. “I was a bottom-feeder on the food chain there, but I was on air all the time, but they were going to bury me. I had been told stories of what they did to women that reported. That they were never heard of again. Here I’ve worked since I was 11 years old to get there, and I was told, ‘You will be buried, you will never work in this industry again.’"

Hughes claims that the network -- and its head of PR Irena Briganti -- launched hit pieces against her in other publications, leaked personal emails and did everything in its power to destroy Hughes' reputation. Briganti has been referred to as both "vindictive" and "ruthless."

When Payne returned to air in September after his suspension, she knew that she had to sue.

“It is entirely false that Fox News retaliated against anyone who complained of harassment," the network told Nashville Scene. "Instead, we proactively reached out to women across our company to address their concerns and where appropriate, compensated them.”

Gervin said, "The federal lawsuit names 21st Century Fox, Fox News, Payne, Briganti and Fox’s in-house counsel Dianne Brandi as defendants. Neither Fox, Brandi, Briganti nor Payne has filed a response to the lawsuit, although they are required to by next week. A pre-trial conference is scheduled for Dec. 18."