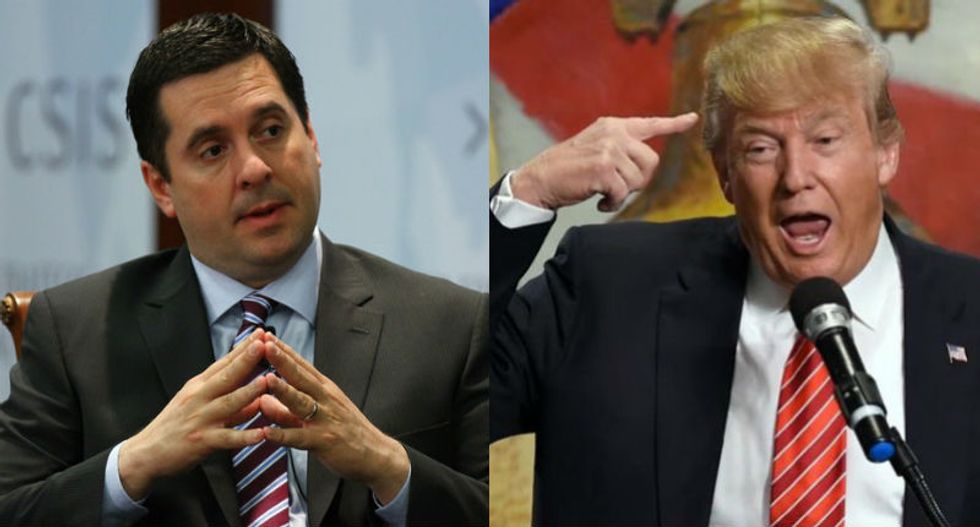 Among the strange non-sequiturs uttered by President Donald Trump during his rally in Pensacola, Florida on Friday night was an off-handed remarks about surveillance with questionable timing.

Discussing domestic terrorism, Trump claimed "we're watching them all, we have thousands of people under surveillance," causing some uproar online early in his free-wheeling speech.

Trump just blurted out: “We have thousands of people under surveillance.”
— jeremy scahill (@jeremy scahill)1512783237.0

Curiously, the comments appeared to have been made around the same time that Fox News reported on an announcement by House Intelligence Committee Chairman Devin Nunes (R-CA), who said he'd uncovered "evidence that abuses have occurred" in the government's use of surveillance.

"We have had an ongoing investigation into DOJ [Department of Justice] and FBI since mid-summer for both FISA [Foreign Intelligence Surveillance Court] abuse and other matters that we can't get into too much," Nunes said. "But it is very concerning."

Nunes gained infamy earlier in the year for his relationship to the Trump White House soon after claims that Russians meddled in the 2016 presidential election. Nunes eventually recused himself from the intel committee's investigation, only to continue to issue subpoenas about the "golden showers" dossier and even launch his own "investigation" into Russia and Hillary Clinton.

"I hate to use the word corrupt, but they become so dirty that, who is watching the watchmen? Who is investigating these people?" Nunes told Fox. "There is no one."

Four days ago, The Intercept reported that the Trump administration is hearing pitches from Blackwater founder Erik Prince that would "provide CIA Director Mike Pompeo and the White House with a global, private spy network that would circumvent official U.S. intelligence agencies."