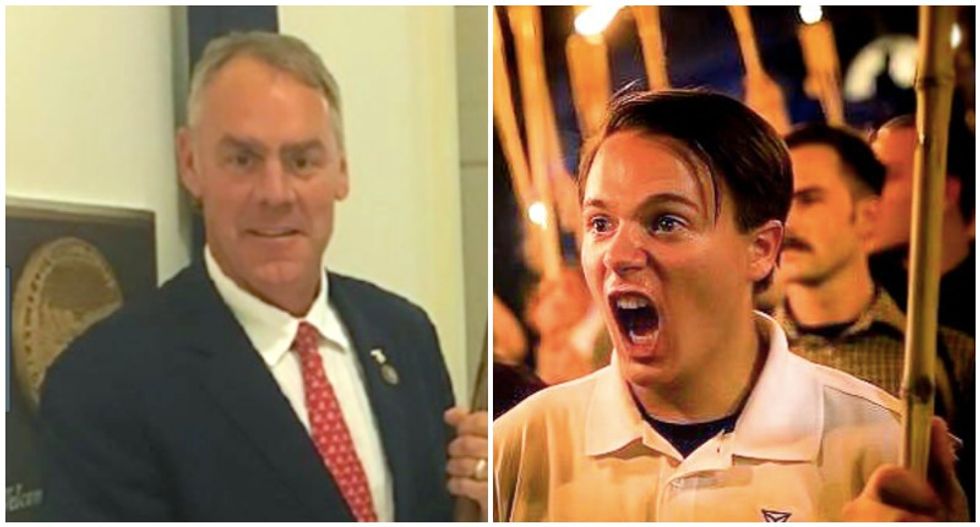 President Donald Trump's interior secretary seems to be the nexus for a shady government energy deal, a proposed private spy agency and white supremacists all based in a Montana town.

Interior Secretary Ryan Zinke, a former Republican congressman, has links to each of the troubling national stories out of Whitefish, the tiny rural town where he grew up, reported Alternet.

His office insists Zinke had no role in securing a private contract for Whitefish Energy to rebuild Puerto Rico's energy infrastructure after Hurricane Maria, but the Cabinet secretary admits he's acquainted with CEO Andy Techmanski.

"Whitefish is a small town where 'everybody knows everybody,'" the office said in an email.

The small company, which has only two employees, won a $300 million contract to restore power to the U.S. territory, but Puerto Rico's governor canceled the contract Oct. 29 after the Federal Emergency Management Agency expressed “significant concerns” about the deal.

Zinke's son briefly joined a friend who worked a summer job at one of Techmanski’s construction sites, and Whitefish said the son worked as a flagger.

The interior secretary is also linked through his sons to a notorious part-time resident of Whitefish.

According to journalist Wayne Madsen, the alt-right figurehead moved to Washington after Trump's election to be closer to the Zinkes and another friend, senior White House adviser Stephen Miller.

Spencer's allies threatened to march in Whitefish, where local residents called on the white nationalist's mother to disavow her son's racist activities.

The Daily Stormer website promised 200 armed skinheads would defend the Spencer family's honor in Whitefish, but the march never materialized -- although counter-protesters and local residents were ready.

Zinke has his own troubling links to white supremacists groups such as the Council of Conservative Citizens, the neo-Confederate group that inspired the Charleston church gunman, and he endorsed a Montana statehouse candidate who was active in a white nationalist group as a student at Liberty University and has extensive ties to European right-wing extremists.

The interior secretary is also linked to one of the key figures pushing Trump to build a private network of spies to bypass U.S. intelligence services.

The Whitefish-based Amyntor Group submitted the proposal, which is being promoted by Erik Prince -- the brother of Education Secretary Betsy DeVos and, like Zinke, a former Navy SEAL.

Buzzfeed reports there's no known relationship between Amyntor and Whitefish Energy, although both companies are based in the rural town of 6,500.