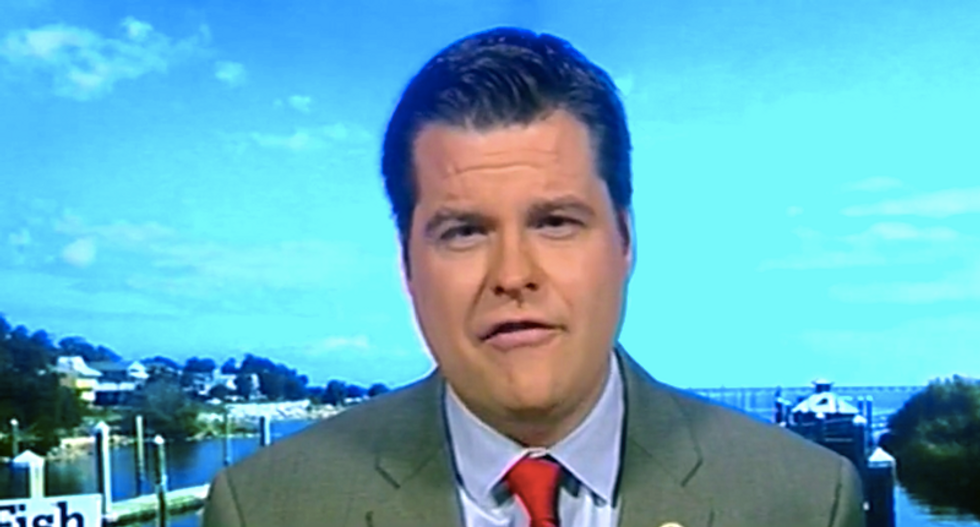 Rep. Matt Gaetz (R-FL) has described special counsel Robert Mueller's investigation as a "coup d'état" against Trump, and he co-sponsored a non-binding resolution in November calling for the former FBI director to resign from the probe over alleged bias.

The president tweeted Monday morning that Hillary Clinton aide Huma Abedin, former FBI director James Comey and unspecified "others" be prosecuted and jailed for their handling or investigation of the former Secretary of State's emails -- and Gaetz agreed Comey's actions warranted further investigation.

"When you have an exoneration statement drafted before the very meat of the investigation is conducted, it certainly raises questions as to the integrity in that investigation," Gaetz told Fox News, which also promoted a right-wing website report about Abedin that seemingly prompted Trump's tweet.

"You have to wonder if the FBI no longer trusted the Department of Justice as a consequence of the tarmac meeting between (then-Attorney General) Loretta Lynch and Bill Clinton," Gaetz continued. "Why would the FBI allow the Department of Justice to then control access to people and access to evidence that they would need in this particular case?"

The congressman also took aim at deputy FBI director Andrew McCabe, whom Republicans have slurred as a partisan operative against the president.

"There (are) a number of inconsistencies that I certainly saw from the testimony that Andrew McCabe has given over time to the Congress, and I don't think it's a coincidence that Andrew McCabe announced his retirement from the FBI just days after providing sworn testimony to the Judiciary Committee," Gaetz said. "So in 2018, expect more depositions, more sworn testimony and a real expectation from the Congress that the Department of Justice and FBI will comply with the subpoenas that we have sent them. Our patience is wearing thin."