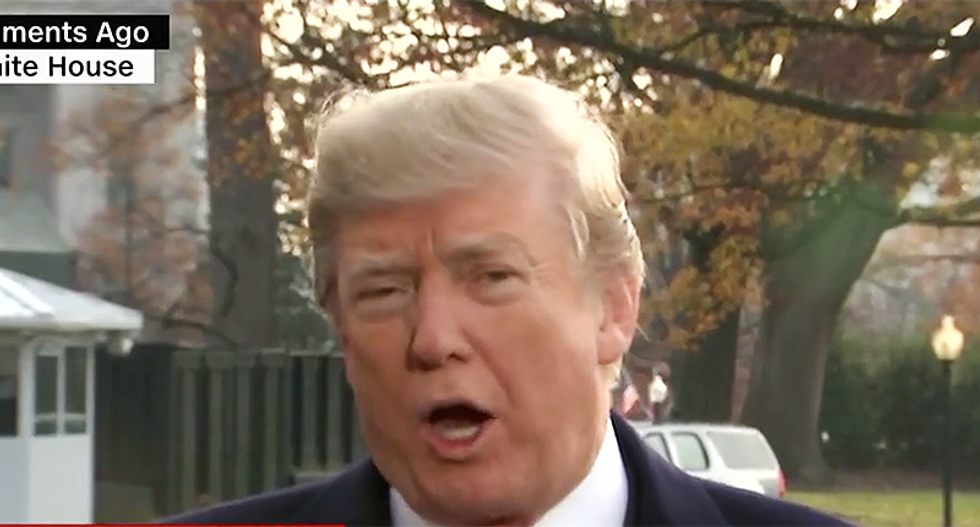 The rapid evaporation of the right-wing conspiracy theory about a "secret society" of FBI agents trying to overthrow President Donald Trump shows that the president's defenders are clutching at straws and the "house of cards" being built as his defense is "already falling apart," wrote Vanity Fair's Abigail Tracy on Thursday.

Bloomberg News said on Thursday that special counsel Robert Mueller is wrapping up the obstruction of justice portion of his investigation.

This comes just as the latest pro-Trump conspiracy theory about an insidious plot by "deep state" operatives to take down the president has been exposed as a misunderstanding of an offhand joke between former FBI investigators Peter Strzok and Lisa Page.

Republican congressmen and Fox News have been breathlessly hyping the text story since Monday, but "(o)utside the bubble however, Trump’s house of cards is already falling apart."

On Wednesday, Rep. Ron Johnson (R-WI) was forced to admit that he had no evidence of an actual renegade FBI group and that the text from Page could have been sent in jest.

"The disconnect between 'fake news' and reality, and Trump’s difficulty differentiating between the two, could be dangerous as he prepares to face Mueller," said Vanity Fair.

Trump's "sense of victimization plays well on Fox News, and with Trump’s base, but it’s not a real legal strategy," Tracy wrote.

In the meantime, Trump's allies in Congress and the conservative media are carpet-bombing the FBI and Mueller's credibility with a confidential memo authored by former Trump transition team official Rep. Devin Nunes (R-CA) and other attacks.

However, Tracy warned, Trump's political defenders will only be of use to him so long as Republicans remain the majority in Congress. If the Democrats are able to take the House and Senate in 2018, the president will lose his protective cordon of lawmakers.