‘This is all one day of news’: Watch Rachel Maddow scramble to keep track of Trump's scandal 'pu-pu platter' 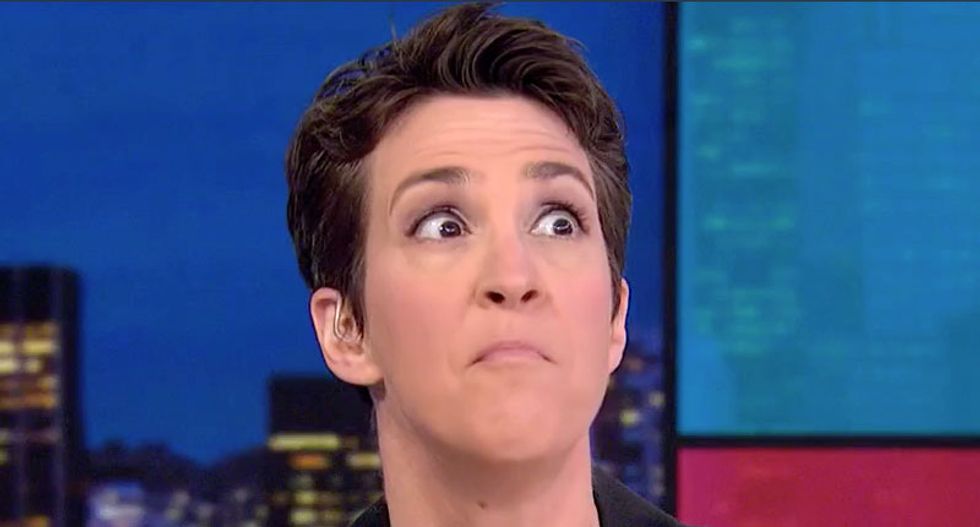 The host of the "Rachel Maddow Show" on MSNBC scrambled to keep up with all of Tuesday's breaking news on the administration of President Donald Trump.

"Where do you want to start tonight? This is like, you're used to having like an entree and two sides for dinner. No, tonight is pu pu platter, tonight you can choose from everything we have to offer," Maddow suggested.

"This has been another one of those days with one breaking news story after another," Maddow explained. "Each one of them a big enough deal that in any other administration, it would be the focus of months of attention and scandal and congressional investigation, but in this administration, it's all you can do to finish reading one of the huge scoops that broke this afternoon and this evening before another one comes flying down the barrel right behind it."

"Just in no particular order today, today the head of the National Security Agency said he has not been authorized to disrupt Russian cyber attacks targeting our elections," Maddow noted. "That's a big story."

"Also today, the president announced his reelection campaign, which is strange enough since he's only been in office for about a year, but then he also chose to name his campaign manager for his reelection effort in 2020. Can't use the old campaign chairman, obviously, he's got 23 felony counts pending against him -- so no, not him. The new campaign chief instead will be the guy that served as Trump's digital media guru from 2016, Brad Parscale, as we await word from the special counsel if there will be indictments in the Russia investigation with the digital media and data side of the presidential election in 2016, Donald Trump has just named his digital media guru from 2016 as the chief of his whole 2020 effort," Maddow continued. "That seems like a big story."

"Oh but wait, as soon as that was announced, the Associated Press promptly reported, a few months ago, Brad Parscale signed a $10 million business deal with a super shady penny stock company that has recently been investigated for pumping its stock price online," she continued.

"The Atlantic magazine tonight released direct messages between Trump campaign associate Roger Stone and Wikileaks," Maddow noted. "This means Roger Stone now admits being in direct contact during the campaign with a Russian cutout that released e-mails stolen by the Russian government."

"All of these news stories breaking in the same afternoon, this is all one day of news," Maddow concluded. "Let's keep going."

Watch Rachel Maddow attempt to recap all of the day's Russian news: