Ex-Clinton official: Sarah Sanders runs risk of being swept up in the Trump probe if she's busted lying for him 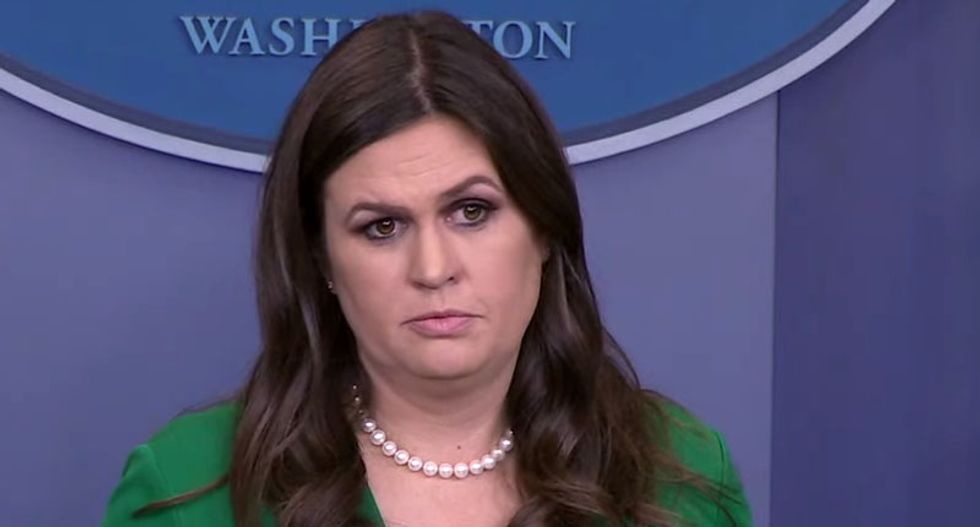 Following White House spokesperson Sarah Huckabee Sanders on Monday declining to address the fact that she lied to the press about President Donald Trump dictating the memo on the infamous Trump Tower meeting between his eldest son and Russian contacts in 2016, the former campaign manager for ex-Secretary of State Hillary Clinton said Sanders may get swept up in special counsel Robert Mueller's probe.

Speaking with CNN co-hosts Poppy Harlow and Brooke Baldwin, Democratic strategist Robbie Mook watched clips of Sanders refusing to answer questions from the press about her now-provable lies about Trump dictating the memo, repeatedly stating, "I can't comment on a letter from the president's outside counsel and I direct you to them to answer it."

"I think a lot of people, they look at spokespeople and some of them might say, 'oh, whatever, you know, spokespeople lie,'" host Baldwin suggested. "But that's not actually the case, right? They spin, right? They may spin, but they're not supposed to lie."

"As a reporter, when they do lie to you, this is something that can haunt them for years professionally -- makes them incapable of doing their jobs," she continued. "When you look at Sarah Sanders getting caught in this place, where she's so disconnected from the truth of what's going on in her White House, what does this mean for her and for this White House?"

"Well, there is two things here," Mook replied. "First, I would actually argue, she is sidestepping, she doesn't want to get in the middle of any sort of legal situation. If there was an attempt to obstruct justice, and she is somehow advancing that, she could be in trouble here too."

"I'm not a lawyer, but if I were her, I would be really worried about weighing in on any of this at all," he added. "I think that's -- I think that in this specific instance is what is going on."

"But to your broader question, look, these guys play according to a totally different playbook," he elaborated. "In a normal circumstance, you absolutely want your spokespeople to have credibility so that when they need to advance a narrative, need to correct the record, the press really pays attention and takes them at their word. Donald Trump does everything completely differently, and particularly in this investigation."

"Look, there is a question about whether people broke the law, there is a question about whether the president should be impeached, those are two totally separate things," Mook said. "And then there is this third space that the White House is trying to operate in, which is throwing out all kinds of wild legal theories. That's what they want us to spend time discussing. They don't want us to talk about that Paul Manafort may go behind bars, how the president may have obstructed justice, they want us to talk about is Sarah Sanders right?  Is she wrong? You know: can the president end an investigation, what did Rudy Giuliani say today?"

"So I agree with everything you said," he concluded. "Normally you want your spokespeople to maintain their integrity but these guys just don't play by that playbook. So I don't frankly think they care."