'The end is near': MSNBC's Rachel Maddow explains what the anonymous NY Times op-ed writer wants the public to do 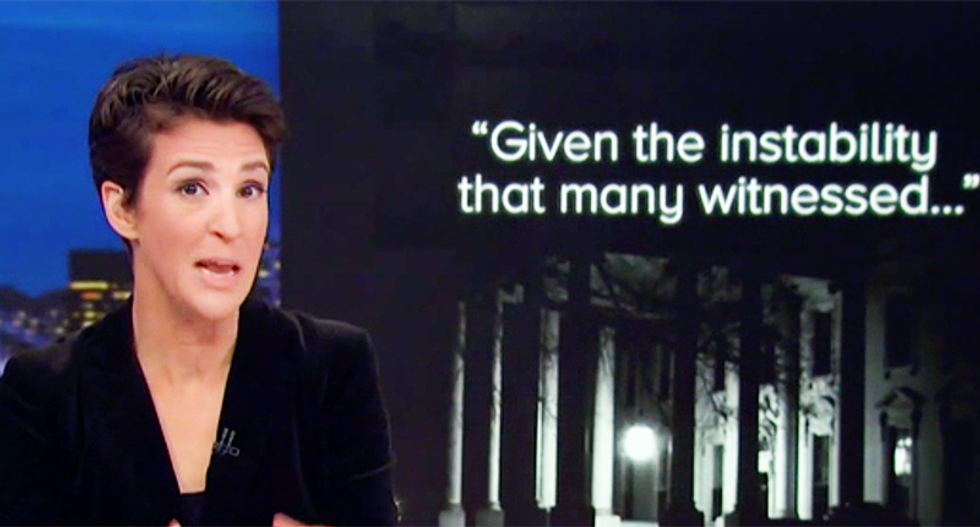 This week has been a difficult one for President Donald Trump and his administration. However, MSNBC host Rachel Maddow hopes the mind-blowing anonymous New York Times op-ed is the beginning of the end for Trump.

"Previously unimaginable things keep happening now in our politics, in the White House specifically," Maddow said after giving a recap of the plotline for "The Manchurian Candidate."

"Unprecedented behavior by a U.S. President means literally, specifically ...we don't know of examples of any other president ever behaving this way. That's not only to say these things are remarkable, there's a practical consequence of these things being unprecedented."

"Court precedent is of no help, in terms of us sorting out as a country the range of options we might reasonably have for how to respond to a situation like the one that we are in. History can't help us; court precedent can't help us. Fiction can at least help us imagine it, right? There's Frank Sinatra in 'The Manchurian Candidate,' desperately trying to un-program 'The Manchurian Candidate.'"

Maddow explained that it becomes more complicated from there, but that the gist is that if the cabinet and VP decide the president cannot fulfill his oath of office, they can boot him.

"Spicer, Priebus, [Gary] Cohn, Powell, Bannon, Tillerson, Mattis, Mnuchin had traveled through the stages of adventure, challenge, frustration, battle, self-justification and doubt before finally having to confront the very real likelihood that the president they worked for...did not have the act to function in his job," Wolff wrote. "The debate, as Bannon put it, was not about whether the president's situation was bad, but whether it was 25th Amendment bad."

Bannon is also quoted toward the end of the book saying there is a one-third chance Trump will make it to the end of his term.

"Maybe we should have seen this coming," Maddow said. "That book with warnings about the president being removed from office this way, that book came out the very start of the year in January. Since then, we got the first book from a former senior advisor to the president. She chose as the title of her book, the word Unhinged, and she was not talking about herself."

She noted the Bob Woodward's book would be released next week, but the passages already leaked cited that senior officials are fearful the president is too unstable to lead. They stole documents from his Oval Office desk so that they could protect the country from the president signing something insane. Fear also says that the military is outright ignoring the commander in chief, up to and including the assassination of foreign leaders.

"There is a reason why the U.S. military is not answering to civilian leadership anymore [is because of] the stuff of dystopian novels and movies like ‘Seven Days in May,'" Maddow said. "Those things make it into political thrillers because the thrill is they're supposed to scare us. In this case, today, not 'Seven Days in May,' a touch of 'Camp David,' someone in the White House is trying to warn the country the president is nuts and unfit and the senior people who work-around him know it."

She went on to warn, "the end is near. Maybe in the form of the invocation of the 25th Amendment by the vice president of the United States and the majority of the president's cabinet. If this is what it appears to be, if this is true, then, one, hey, this is a remarkable time for the Senate to Russia ahead to try to install a lifetime appointment. Two, if they're not too busy trying to move ahead with the president's nominee for this lifetime appointment, hey, maybe this is something Congress might want to look into."

The inevitable final question, according to Maddow, is what was the catalyst for those in the White House taking these steps to warn the public.

"The 25th Amendment discussions in the president's cabinet may have been secret before, but they are public now on purpose because of somebody who works at the senior levels of the Trump administration," she noted. "Why did they make this public now? This is a stark warning from somewhere near the top of the government. If the president is amoral and anti-democratic and erratic and impulsive and reckless and all the rest of it, then, what do we expect him to do next now in response to this? Who's ready for it inside and outside the administration?"