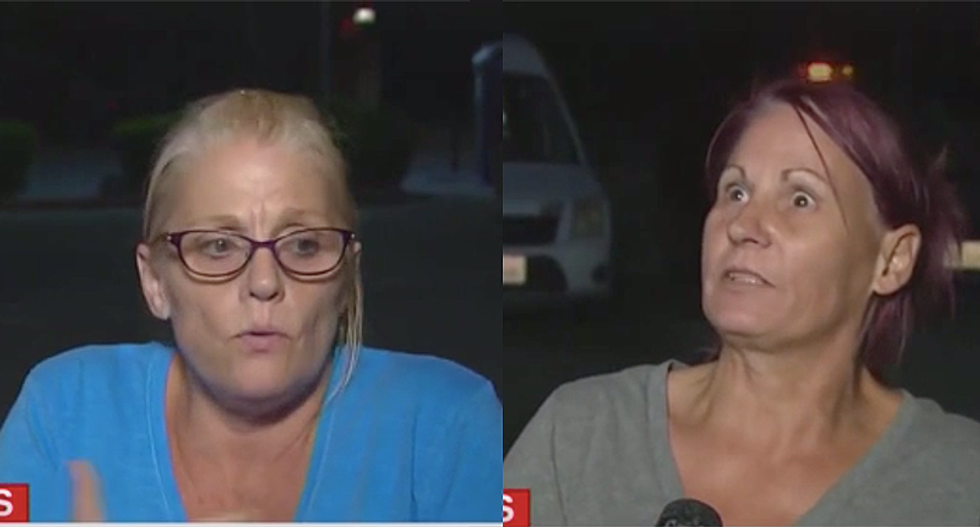 Two women who survived the Gilroy, California shooting Sunday told a CNN reporter that they witnessed the shooter get taken down by police. Those reports have not been confirmed by any network or police, however.

The two women were vendors at the festival selling honey. They walked away from their booth to the portable toilets set up nearby. When they exited, that's when they heard the first "pop" of the gun. They said that they turned to see the shooter, about ten feet away.

"I think we were, like, ten feet when we first saw him because he was — we walked out of the porta-potties, which was probably about 25 feet away from our tent and we heard a shot as we were getting out," said Candice Marquez. "What is that a firecracker? We turned around, and this guy had his rifle, and he was putting something in it. We [saw] his side. He was white, and he had shorts on. He had a green vest and a brown hat. As soon as he put that in, he just turned around and started walking fast towards our thing shooting. And we ran the other way.

"And our boss and her husband got shot, and my granddaughter and her son were in the tent at the time," Cheryl Low said. "They didn't get shot. My granddaughter grabbed him and hid him underneath a box. She looked him straight in the eye and saw him, saw him coming towards her. They hid. They shot my boss once in the leg, and he shot her husband three times. They're in critical condition. Both in surgery at Valley Medical."

After the two women helped get injured people in vehicles to get to ambulances, they heard people saying that there was another shooter in the bushes somewhere. Police told the women to "run, get out of here as fast as you can!"

Another witness reported seeing parents screaming while carrying a lifeless little boy. Low and Marquez confirmed that they too saw the boy, but that he was clearly dead.

During a press briefing, Chief of Police, Scot Smithee said that four people have been confirmed dead so far.

Watch the report from the women below: