Meghan McCain's pity party for Sean Spicer gets smacked down: 'He shouldn't have lied' 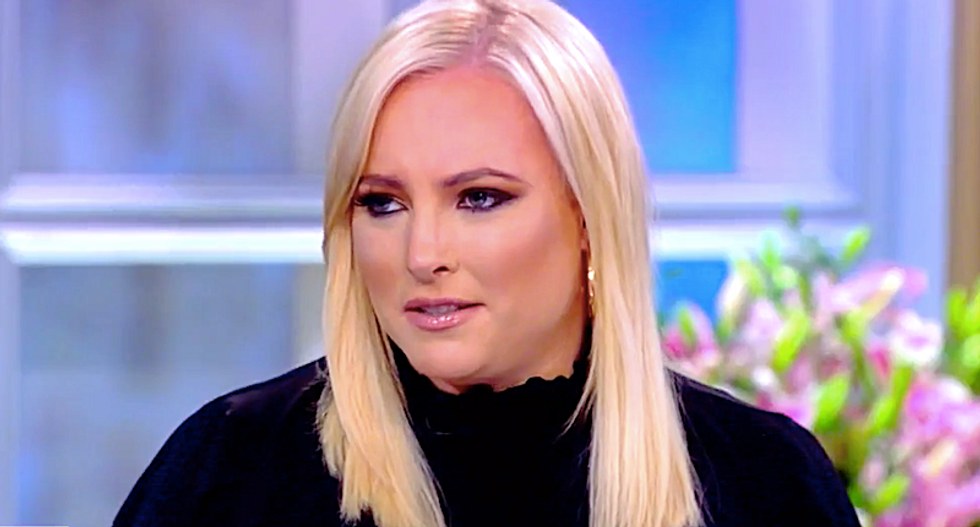 "The View" co-host Meghan McCain tried to help her friend Sean Spicer launder his reputation on "Dancing With The Stars," but co-host Sunny Hostin quickly put a stop to her efforts.

The former White House press secretary showed off his dance moves Monday in a neon green ruffled top, and McCain insisted his dancing would be impressive at a wedding, if not on television.

"That's me when my Amazon packages come," McCain said, watching video of Spicer dancing. "I get so excited. I know him pretty well because I used to work with him at Fox (News)."

She listed his credentials as a family man to show why he deserved a second chance at a public career despite disgracing himself serving President Donald Trump.

"He has children who are adopted, he's a really decent man," McCain said. "He used to dress up like the Easter bunny at the Easter egg roll. He did it, you know, for kids, and he used to be really well respected, and I think it just goes to show when you work in the Trump administration, there are some people that come out of it, and maybe they have a political future, or you can be on 'Dancing With The Stars' and opening that up."

McCain agreed Spicer had gambled his reputation to serve in the White House, but she asked viewers to forgive him.

"I'm not mad at this is he has kids to put through college," she said, "and he has to pay his bills one way or the other, and if you have to dance in a lime green shirt entertaining me when you have nothing else to do at night, then I'm not that mad at it, and politicians have done it before."

"There was a video of Sean Spicer the day after the performance crying in his car, and people thought he felt he didn't do a good job," Huntsman said. "He was watching a video of his kids watching him on TV, and that made him cry, that he was so proud of that moment. Ultimately, we're all human beings, no one wants to be mocked or made fun of."

Hostin wasn't having it.

"Then he shouldn't have lied to the American people, repeatedly," Hostin said. "That's all, really. For me, you have got to think about what he did. He lied about the inauguration crowd, he defended Trump's lie about how there were 3 million fraudulent votes in the 2016 election. The list goes on and on and on, (he) lied about the Muslim ban."

McCain gave it another shot.

"I hear you loud and clear, but this has to feel a little -- no offense to the show, I know it's hugely popular," she said. "I myself am watching it now because he's on it. This is not what he thought his life would look like, I'm assuming."

"He had to have known the moment he went behind that bush that that was what people were going to take," Goldberg said.