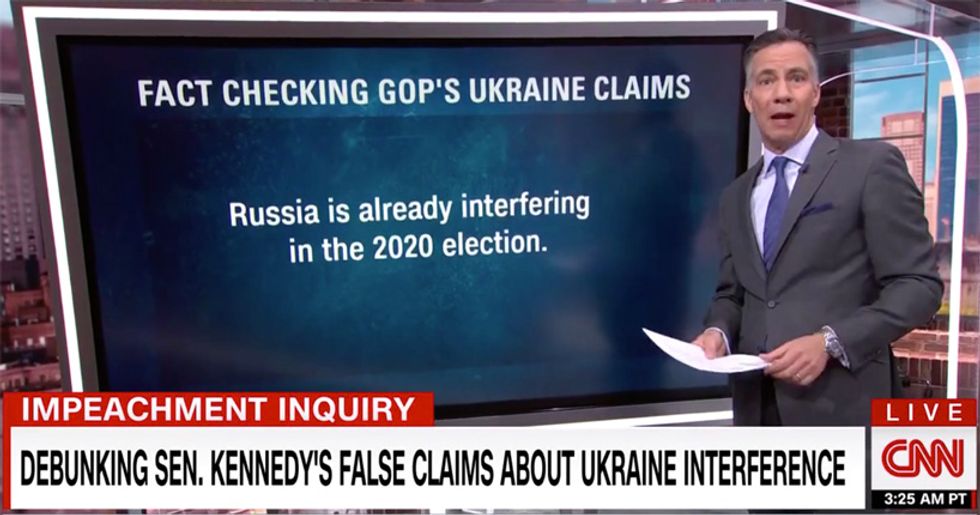 Filling in on CNN's New Day, host Jim Sciutto did an on-air fact check of the Russian talking points that were parroted over the weekend by Sen. John Kennedy (R-LA) and were used by defenders of Donald Trump during two weeks of impeachment hearings.

Using clips from Kennedy's contentious interview with "Meet the Press" host Chuck Todd, where Todd told the Republican senator he was being duped if he believed what he was repeating in defense of the president, Sciutto went point by point through the interview and knocked every assertion down.

"Since the 2016 election, President Trump has searched for someone to blame other than Russia for interfering in the U.S. election despite the clear assessment by multiple U.S. intelligence agencies," Sciutto began. "The impeachment inquiry in the House has brought the president's belief in the conspiracy theory that Ukraine is the one that meddled in the election into full view -- and now Republican lawmakers seem to be picking up on it."

After sharing clips of Kennedy's scrambling attempts to defend Trump by repeating discredited assertions, Sciuto brought the hammer down.

"So why are these statements from Senator Kennedy, a sitting member of the Senate Judiciary Committee, so misleading? I've laid out the facts," the CNN host began. "Russia interfered in the 2016 election to a degree no other country ever has. That assessment is backed up by Intelligence and the Senate Intelligence Committee. This is a fact, not an opinion."

"Also a fact, U.S. intel agencies are aware of a year's long campaign by Russia to shift blame away from themselves and onto Ukraine," he continued. "That's what Russia expert Fiona Hill said in public testimony. According to our reporting, senators were even briefed on Russia's campaign to blame Ukraine for meddling in 2016 just this fall -- Senator Kennedy says he did not attend that briefing. Now, how can we be sure about Russia interference? Well, two of the Russian hacking groups, dubbed 'cozy bear' and 'fancy bear,' were already well known to u.s. intelligence agencies. They had already hacked the State Department email system in 2014 and 2015. They used similar patterns in 2016 when a former NSA deputy director told me they didn't even bother to hide."

Sciutto also referenced the timing of DNC emails that were dumped to the public just as the "Access Hollywood" tape that should have derailed Trump's campaign was released.

"Now, the president has claimed falsely that Ukraine may have taken the DNC server.," Sciutto added. "No one, not U.S. intelligence, not the Senate Intel Committee or private security firms believes this and, by the way, that server? It still sits in the basement of the DNC headquarters."