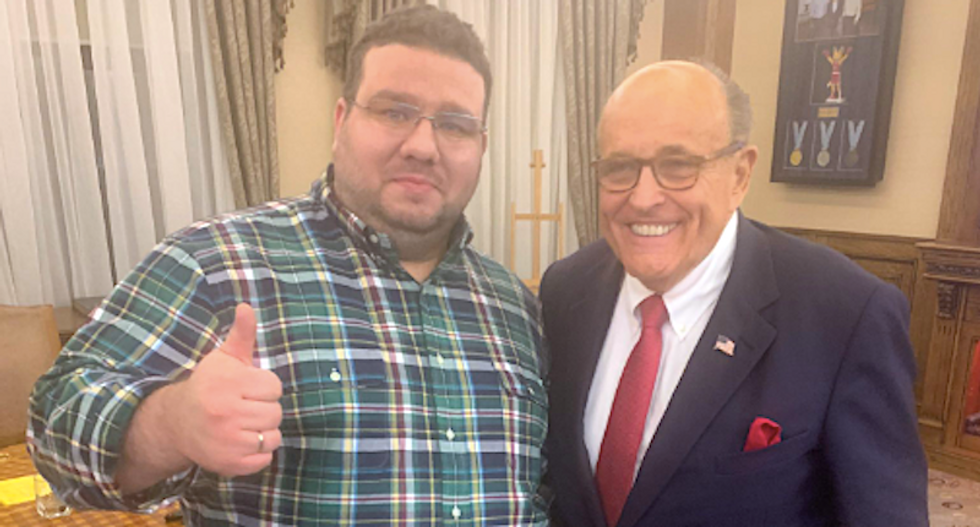 Rudy Giuliani was photographed hanging out with an alleged Russian intelligence operative at a notorious haven for Kremlin spies while visiting Ukraine.

President Donald Trump's personal attorney flew to Kyiv and Budapest this week, as impeachment gathers around the White House, to take part in a production by conservative media outlet One America News and meet with Ukrainian politicians to discuss investigations around Joe Biden.

Andrii Telizhenko, a former Ukrainian diplomat, tweeted out a photo of himself and Giuliani on Thursday evening at the Premier Palace Hotel.

Journalist Jack Laurenson, editor of the Kyiv Post, said the hotel was owned by Russian oligarch Alexander Babakov, an ally of President Vladimir Putin, and was a known den for Kremlin agents.

Telizhenko himself is alleged to be involved in Russian intelligence efforts.

“To all conspiracy theorist there is no secret on what we are doing," Telizhenko tweeted, along with a photo of himself and Giuliani, who is holding a cell phone. "The truth will come out.”

Telizhenko has been instrumental in pushing unsubstantiated claims that Ukraine, not Russia, interfered in the 2016 presidential election.

The Daily Beast previously reported that Telizhenko met with Rep. Devin Nunes (R-CA), whose own role in the scandal has been uncovered after he sat in impeachment hearings as the ranking member on the House Intelligence Committee.

Giuliani has not been shy about admitting that he was in Kyiv this week to discuss the Biden investigation that has landed Trump in impeachment trouble.

“The American people will learn that Biden & other Obama administration officials, contributed to the increased level of corruption in Ukraine between 2014 to 2016,” Giuliani tweeted out Thursday afternoon. “This evidence will all be released very soon.”

Here are @AndriyUkraineTe and @RudyGiuliani here in Kyiv, #Ukraine. At midnight, they are in lounge bar of the Prem… https://t.co/aqO9y3m2hi
— Jack Laurenson (@Jack Laurenson)1575587518.0