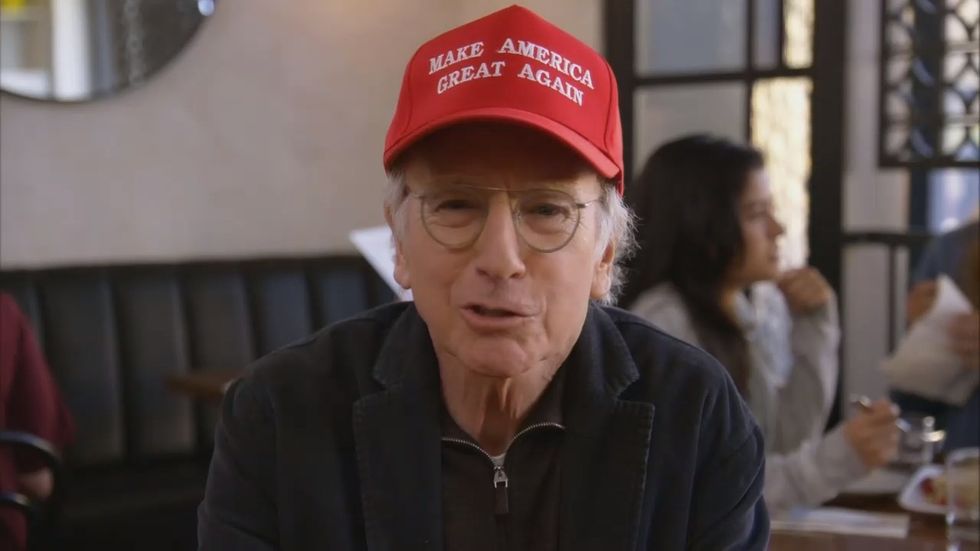 In the 10th season opener of HBO's Curb Your Enthusiasm, creator and star Larry David mocked Trump and his supporters by using the infamous red "Make America Great Again" hat to repel both frenemies and innocent bystanders alike throughout the episode. Some of those scenes can be seen in the embedded videos below.

But the most hilarious exchange took place while Larry was trying to get out of having lunch with Everybody loves Raymond creator Phil Rosenthal. A 'repulsed' Rosenthal, upon spotting Larry wearing the MAGA hat, quickly fled the scene:

Larry: Good to see you. Sit. Sit down. Sit down. Boy, I'm so glad we did this. It was such a good idea. You, you were definitely right. I'm starving. I hope this place is good.

Phil: Yeah, it's great. It's big portions on the food and everything. It's really a fantastic place.

Larry: You know what else? I've been thinking, really thinking about this Ethiopia thing.

Phil: Yeah, actually, I heard that we have some budget cuts, and Ethiopia's a little... ex-expensive to shoot in.

Larry: Wasn't that one of the shithole countries? I can't remember if that was on the list or not.

Phil: Oh look at that. My son's flight got in early. And I gotta go get him.

Larry: Send an Uber or something.

Phil: He needs to see me because he has a little anxiety.

You can see that scene below: