Trump has a cynical reason for letting governors take the lead in dealing with the pandemic: report 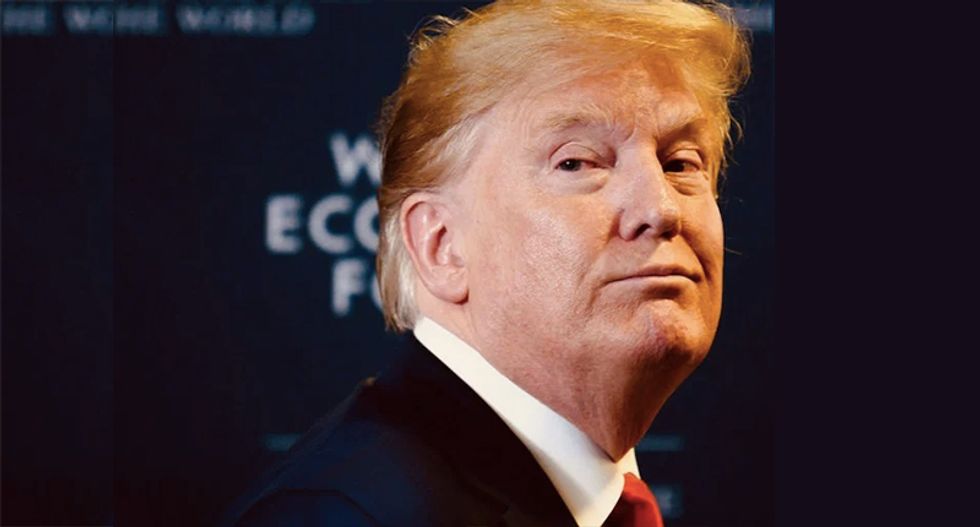 According to a report from Politico, Donald Trump is more than willing to let the nation's governors deal with the still-growing COVID-19 pandemic because he hopes it will save his chances of being re-elected.

For days, the president has been encouraging lawmakers at the state level to fend for themselves when it comes to searching for -- and buying -- critically needed medical equipment to battle the public health crisis that has shuttered businesses and led the public to hunker down in their homes. As the report notes, by putting the onus on state lawmakers to deal with the problem, the president can benefit electorally in two ways.

In short: they take the blame if things go badly or he can take the credit for good news if they succeed.

"As the virus spreads across the U.S. and new hot spots emerge in states such as Illinois, Louisiana, Michigan and Texas, senior administration aides have privately argued the coronavirus response is a test of local politicians’ leadership and resourcefulness — with the White House acting as a backstop for the front-line state-by-state efforts," Politico's Nancy Cook and Dan Diamond wrote before adding that White House officials see the president benefitting from the strategy.

"The approach could give the White House an opportunity to extract Trump from future criticism as the virus spreads throughout the nation and threatens to kill hundreds of thousands of Americans," the report states before conceding. "It also could backfire among Americans who prefer to see a firm national response to a disease that does not respect state borders."

According to former Maryland Gov. Martin O’Malley (D), it is a "Darwinian approach" to governance.

“That is a Darwinian approach to federalism; that is states’ rights taken to a deadly extreme,” he explained. "For all of the good work I see governors doing, only the president has the intelligence and resources to tip the shores, the power to invoke the Defense Production Act and control over whether there are adequate stockpiles for the threats of our day and the FEMA reserves.”

Noting that the president has been engaged in political battles over the pandemic response with some governors -- particularly Govs. Gretchen Whitmer (D-MI) and Jay Inslee (D-WA)-- and had an off-and-on battle with New York's Andrew Cuomo (D), White House advisers see a huge advantage to the president when he hands off responsibility to the state lawmakers.

"Trump’s political advisers see little risk in the president criticizing individual governors, or saying some leaders needed to be more appreciative as he did during a White House briefing on Friday," Politico reports. "What will matter far more to Trump’s reelection prospects will be the way Americans perceive the recovery from the pandemic from both a health and economic standpoint, say his political advisers."

According to one Republican close to the White House, "People will care if they had a family member get sick or die, or if they or a family member lost their job or were set back in terms of their income. No one will remember that Trump and Democratic Gov. [Gretchen] Whitmer of Michigan got into a fight.”

John Fetterman is about to hold his first Philly rally of the Pennsylvania Senate campaign. What took so long?

PHILADELPHIA — He rallied in Erie and marched in Pittsburgh. He held a town hall at a rural inn in Franklin County, spoke to union members in the Lehigh Valley, and headlined Democratic dinners in Northeastern Pennsylvania. But since launching his campaign in February 2021, Democratic Senate candidate John Fetterman hasn’t held a public event in Pennsylvania’s biggest, bluest city. Until now. On Saturday, less than 50 days before a general election that could decide control of the U.S. Senate, Fetterman will hold his first open event in Philadelphia as he rallies with U.S. Rep. Dwight Evans. I...

The three-judge panel — which included two Trump appointees — said Cannon, a fellow Trump-appointee, "abused" her discretion by barring the DOJ from continuing to investigate the classified documents seized from Trump's Mar-a-Lago residence and allowed investigators to resume their probe.

Democrats in New Mexico are calling on the state's Republican Party to distance themselves from a GOP mail advertisement that was condemned by the Democrats are racist.

According to the Santa Fe New Mexican, the mail ad was paid for by the New Mexico GOP, and was distributed among nine House districts that are considered up for grabs during the midterms. The New Mexican displayed a picture of the ad, which depicts a stock photo in which a pair of dark hands is cutting the hair of a depressed-looking young boy.