Kayleigh McEnany's latest defense of Trump exposed the fatal flaw that could end his presidency: columnist 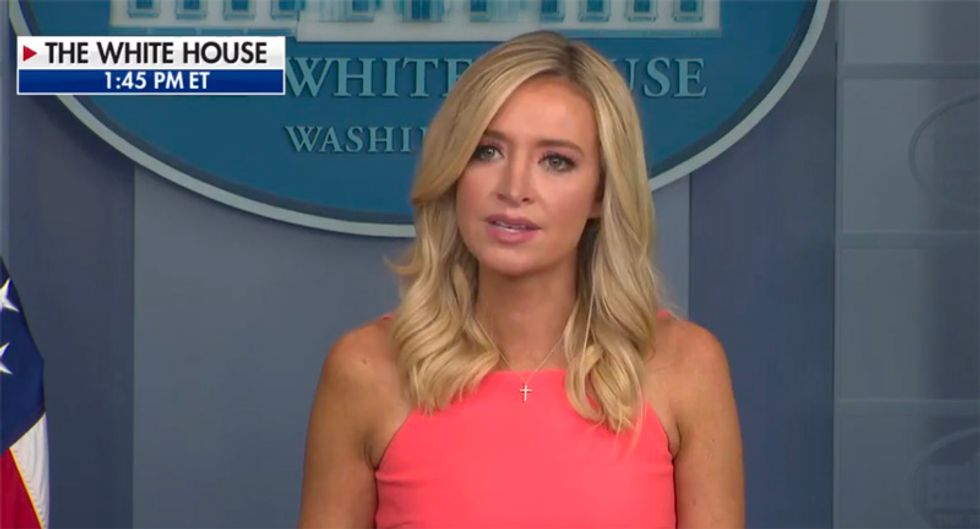 In a column for the Washington Post, Dana Milbank explained that White House press secretary Kayleigh McEnany's attempt to dismiss allegations that Donald Trump knew about the Russian bounty program targeting U.S. military personnel exposed a presidential weakness that could be used as a contributing factor to destroy his political career.

As the columnist noted, McEnany used what has become a staple of the White House when controversies arise: pleading that the president is ignorant about what is going on around him.

Addressing questions about what the president knows about the explosive allegation that Taliban members have been told that Vladimir Putin's government will pay them every time they kill an American soldier -- and that Donald Trump has been aware of it -- McEnany claimed the president has not been briefed and never suggested that he was interested in the facts on the ground.

In fact, he noted, citing the president's obliviousness, lack of attention to details, and general ignorance about his duties has become an increasing excuse for the failures of his administration -- and the voting public is noticing.

"This is quite unusual: The White House insisting the president was out of the loop on something he should have known about. It’s as though Trump’s ignorance is a point of pride," Milbank wrote before adding, "The out-to-lunch excuse has been getting more use as things get worse for Trump. On Sunday, Trump shared a video in which a man chanting 'white power' (Trump’s tweet thanked the 'great people' in the video) and deleted it only after an outcry that included Republicans. McEnany claimed Trump 'did not hear that particular phrase' when he watched the video."

Writing, "Ignorance may be the only bliss for Trump as his presidency dissolves into failures," Milbank then added, "In one sense, McEnany has a point about anarchy: When it comes to the nation’s troubles, our head of state is MIA."

He then highlighted an exchange on Monday when the press secretary was pressed on what Trump knows and when did he know it.

“If he hasn’t been briefed,” asked Dallas Morning News’s Todd Gillman asked, “how is he certain that Russia didn’t put out these bounties?” to which McEnany shot back by attacking the report and blaming, "... the irresponsible decision of the New York Times to falsely report that he was briefed on something that he in fact was not briefed on.”

As Milbank sarcastically wrote, "How dare the Times report that Trump was informed! Get it right: This president’s ignorance is total — and you can quote the White House press secretary on that."