COVID-19 was Trump's 'first significant test -- and he flunked it with flying colors': Paul Krugman 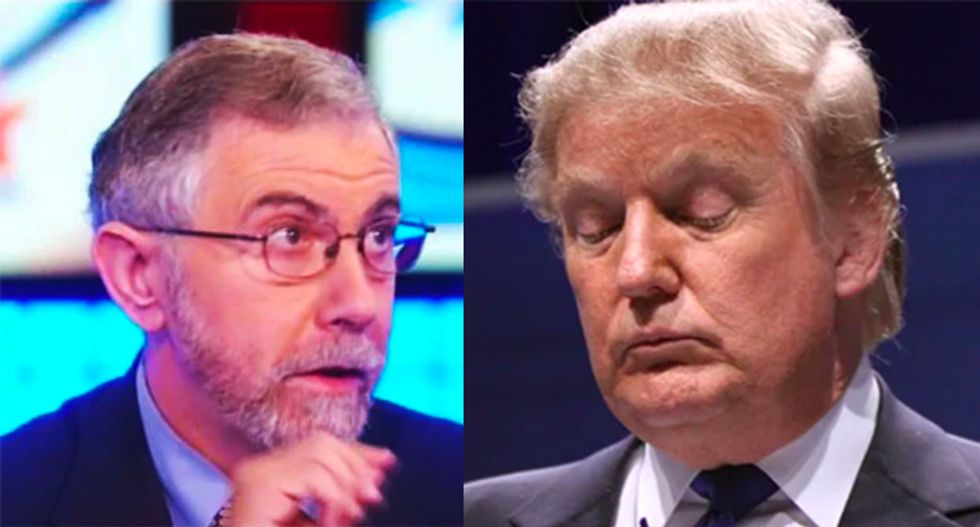 In a series of tweets on Tuesday morning, Nobel Prize-winning economist Paul Krugman stated that Donald Trump coasted for the first three years of his presidency on a solid economy and high employment numbers left to him by his predecessor, former President Barack Obama, but when faced with the first real crisis of administration, he fell flat on his face.

With the president's approval numbers plummeting to new lows and Republican lawmakers fearful that he is leading them into a November election wipe-out, Krugman said that they shouldn't be surprised because they have been walking a tightrope with the inexperienced and volatile Trump since he assumed office in January of 2017.

According to the New York Times columnist, it took the coronavirus pandemic -- and the Trump administration's bungling of it that has led to 130,000 U.S. deaths, massive unemployment and a crippled economy -- to Republicans in a corner over Trump with nowhere to go.

"One thing you can sense from Republicans is an outraged sense of injustice — how dare the world throw Covid-19 at them, when things seemed to be going so well? But the real surprise is that it took this long for Trump to face a real crisis, " Krugman tweeted before adding, "Every other modern president faced some kind of external challenge during his first three years. Obama took office amid a financial crisis. Whatever you think of his response, GW Bush faced 9/11. Clinton faced stubbornly high unemployment, Bush the elder Saddam Hussein."

In Trump's case, Krugman asserted, he failed the crisis test in spectacular fashion with the economist sharing a graphic showing plunging labor numbers.

He then graded out the president, tweeting, "In other words, Covid-19 was his first significant test. And he flunked it with flying colors."