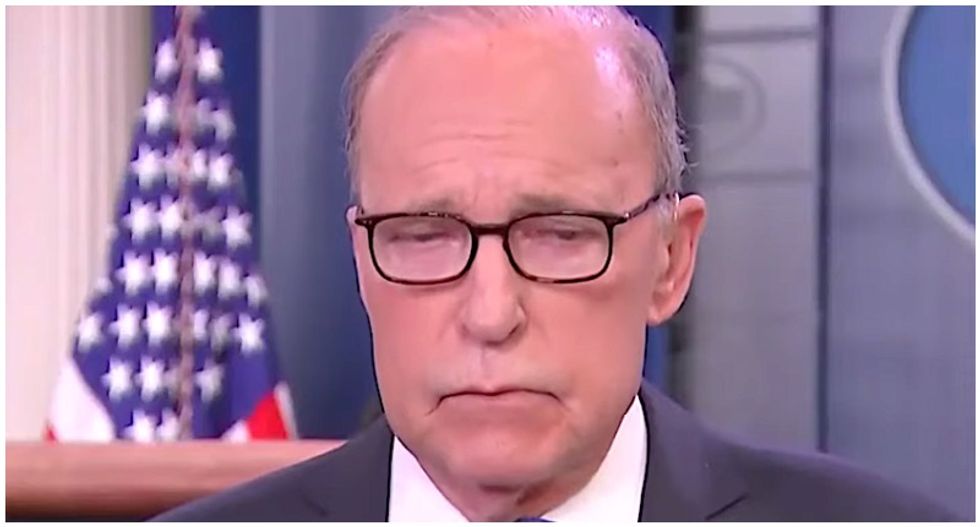 Two economists walked through the shocking lack of understanding that Senate Republicans seem to have about the desperation Americans are facing in the COVID economy.

House Speaker Nancy Pelosi (D-CA) explained in a CNN interview this week that the $600 in unemployment funds was just an easy way of giving a neutral sum of money that could be applied universally to people in expensive areas and places with more affordable cost of living. Normally, unemployment gives a percentage of funds based on previous employment. For those working in the gig-economy or living off of tips, a percentage isn't exactly the most helpful way to calculate it.

University of Michigan professor of economics and public policy, Betsey Stevenson, explained that not only is Pelosi correct, one of the biggest problems Americans will face is that unemployment offices aren't equipped to handle the flood of claims.

"There are still people who filed in March or April who haven't received their payments, so when she says this is adding complexity, I get why it's frustrating to hear that, but the reality is we're not dealing with the most modern, the most up-to-date technology in our state unemployment offices, and it absolutely will take them weeks and weeks to program, maybe a month or more, for them to do that," said Prof. Stevenson. "People will qualify, but they're not going to get the payments maybe until October. Then the problem is people are worried about eviction notices going out tomorrow, turning around and tell your landlord, 'don't worry, I'll get money from the unemployment office?' That's not going to go on to sell so well."

At the same time, the White House economics adviser has failed at every step of the way.

In an interview with CNN's Jake Tapper on Sunday, Larry Kudlow claimed that Americans are doing great and the country is in a "V-shaped recovery." The economists called it absurd.

"Kudlow is a clown," said the University of Michigan economics and public policy professor, Justin Wolfers. "He hasn't gotten a single thing right in at least six months. He told us this wouldn't hurt. It has. He told us we would bounce back to work. We're not. He just said -- and patently misrepresented economists in saying that economists think we're on a path of a self-sustaining economy.' There's a shutdown, you lift the shutdown, and automatically part of that reverses. The big economic question is, at the end of that, how much damage have you done? The longer it draws out, the more damage we do. With the resurgence of the bug, it's drawing out how long the economy is remaining in hibernation. And as a result, we're seeing an increasing number of firms not survive that hibernation. So, we are going to bounce back somewhat, but not back to where we were. And the longer it takes, the more pain it will exact and the worse the longer-run recession is going to be."

"You know what's great about Kudlow saying that?" cut in Professor Stevenson. "If the next employment report comes out and we don't have job growth, will he say, 'I'm wrong? No V-shaped recovery is coming.' Even the data we see right now does not indicate a recovery. Last week over a million for first-time unemployment. So, we're obviously not in a recovery period when the job loss is continuing to exceed the maximum job loss in 2008. So, this isn't about he said/she said. The facts on the ground don't match us being an upward trending recovery."

See the full explanation below: