Pastor slams Trump for lying about a ‘dystopian dreamscape’ if Biden wins: ‘Pandering to the worst level’ 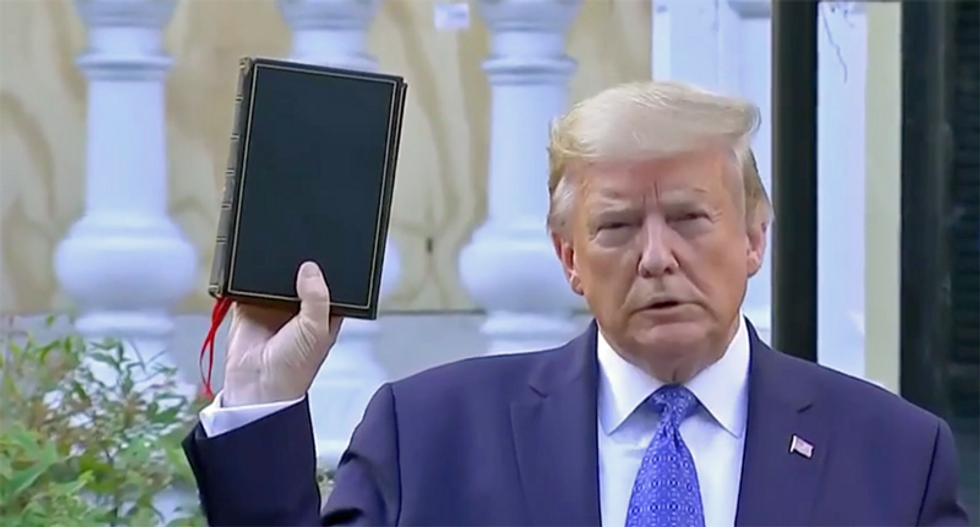 As President Donald Trump loses ground with evangelicals realizing he's not actually a Christian, the right-wing has scrambled with the only strategy they have: try to claim Joe Biden, a devout Catholic, is somehow not a Christian.

"Nobody ever would ever even think possible because he's following the radical left agenda," said Trump in Ohio. "Take away your guns. Destroy your Second Amendment. No religion, no anything. Hurt the Bible. Hurt God. He's against God."

Biden responded to the attack talking about his faith, explaining how it has helped him throughout his life as he's suffered horrific tragedies like the death of his wife and baby girl and injuries of his two sons. In the wake of his son's death, Biden has taken to wearing Beau's rosary around his wrist.

Biden's faith has served as a contrast to Trump's lack of religion, faith, belief or any real understanding of religious texts. When questioned about passages in the Bible that touched him, Trump couldn't cite any. When speechwriters gave him a lecture for Liberty University, he didn't know that 2 Corinthians was said as "second Corinthians." Instead, he called it "Two Corinthians," showing his ignorance about chapters in the Bible to global ridicule.

While there were conversations about the faith of Sec. Hillary Clinton and Trump in 2016, those conversations haven't been part of the 2020 cycle. In a conversation with Raw Story, Vote Common Good's executive director Pastor Doug Pagitt explained that the absence of a conversation about religion this election is likely due to the fact that the world is well aware that Trump can't win that fight.

"He is the story, where, in previous elections, the candidate kind of represented or sat atop a pyramid of belief," said Pagitt. "People are like -- he's an incompetent, immoral, cruel, unkind, actor in our society. It's really hard for religious people to defend family values -- to defend policies. Everything is about -- do you defend Trump or do you stand opposed to Trump? And that is not a place religious people want to be."

He explained that many people of faith and leaders of faith are in an uncomfortable position because Trump is the most unfitting spokesperson for those who hold religious beliefs.

"I know a lot of people who would be speaking about faith and religion and politics, and they won't do that now because they know it combines them to accept Trump in a way that they won't accept," said Pagitt.

He called out Trump, "blatantly lying" about Biden's in a kind of "dark apocalyptic, dystopian dreamscape" that he said reminded him of the Left Behind series.

"It's indefensible and it's pandering to the worst level and it's right up there with clearing a protest so you can hold a Bible over your shoulder as a prop," he continued, noting that claiming Biden is against the Bible and against God is "so out of tune with faith voters." Trump, however, is the false prophet that has led the people astray, he described relating it back to the Left Behind books. "They're not likely to dabble in that kind of language while watching Donald Trump be so crass and so cruel and so blatantly not religious."

For many conservatives, the purpose of Trump's alliance with the white evangelical base was to ensure anti-choice and anti-LGBTQ judges, but Pagitt noted that even then Trump has failed in his last several Supreme Court cases, even among the judges that he nominated.

When asked if he thinks people of faith are ready to abandon Trump, Pagitt said that it's clear they already are, but he's unsure if it's going to be enough. Four years ago, he said he thought that people of faith couldn't possibly see the president as any kind of moral leader. They elected him anyway.

"I worry that the identity runs so deep that people feel bad enough that they'll plug their nose and vote for him anyway, not because they want him, but they don't know how not to want him," said Pagitt. "Religion is in a very weird relationship with politics. So, there's a lot of work to do."

Vote Common Good isn't running a "moral" campaign attacking Trump's lack of ethics and values. Pagitt said that they're merely reminding people that they are the ones who are good people and believe in the kind of compassion and love that Jesus preached. The organization is pressing for voters to remember that about themselves on Election Day and urging them to let their conscience be their guide.

In the past, he said that issues like marriage and abortion have been "stand-ins" for a good person or for family values. People could convince themselves that they are forgiven for their own unethical and immoral behavior by claiming that because they're against abortion and oppose same-sex marriage, they are somehow absolved of their own unchristian sins. Right-wing pastors, some of whom have been caught in their own unethical behavior, have used it as a crutch to distract from the actions of those in the leadership of their church or far-right politics. Conservatives spout anti-choice rhetoric while ignoring the torture of children on the border in cages, ripped from their parents' arms. They spout "family values" talking points while refusing to sign a reauthorization to the Violence Against Women Act because it doesn't discriminate against LGBTQ people.

One scripture the pastor said that he hoped Trump would take to heart is 1 Corinthians 13:13: "Now these three remain: faith, hope, and love--but the greatest of these is love."

It's unclear if Trump will continue to fight for the faith vote, particularly when it comes to the debate. Biden, who was raised a Catholic, was baptized and confirmed, knows the Bible well and isn't uncomfortable speaking about his faith and how it guides his belief in the common good. It's unclear how Trump would navigate such questions.

Vote Common Good has also teamed up with the Lincoln Project in outreach to evangelicals who are looking for another way to honor their values than a vote against Trump.