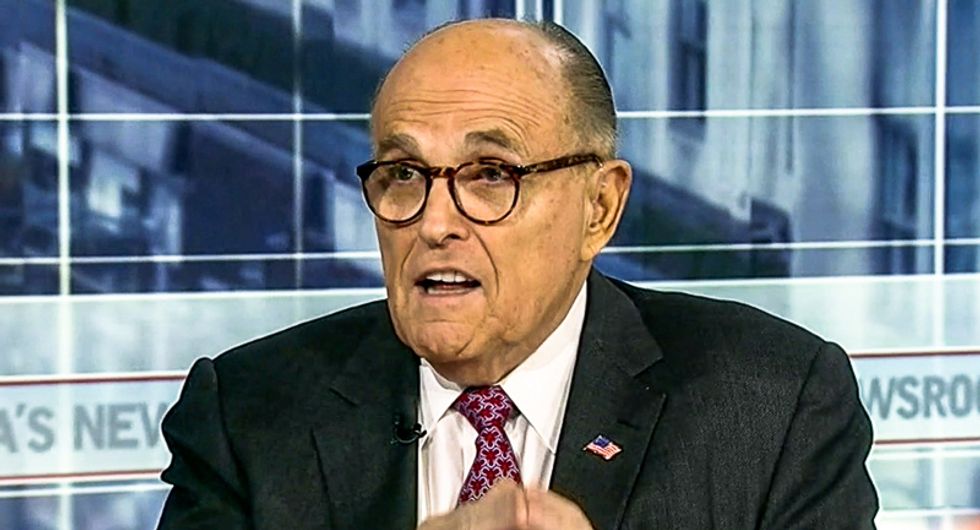 The one person Republicans were using as a source of "dirt" on former Vice President Joe Biden, Andrii Derkach, was officially sanctioned by President Donald Trump's Treasury Department for being an "active Russian agent." Now, Trump's favorite conservative outlet, OANN, is scrambling to remove any mention of his name from their website. They neglected to remove other spellings of his name, however.

BuzzFeed reporter Christopher Miller posted screen captures of searches for Derkach on OANN's site but was unable to find any. Derkach was the one sending Sens. Ron Johnson (R-WI) and Chuck Grassley (R-IA) as well as Rep. Devin Nunes (R-CA) files he said would prove that former Vice President Joe Biden's son was doing something illegal.

But other spellings of the name, such as "Andrii Derkash," still turn up reports on OANN, including Rudy Giuliani's "documentary" about what he was able to find in Ukraine thanks to Derkach.

U.S. intelligence agencies tried to warn that Giuliani was associating himself with a Russian agent in the making of his OANN documentary but he and other conservatives ignored it.

“Between May and July 2020, Derkach released edited audio tapes and other unsupported information with the intent to discredit U.S. officials, and he levied unsubstantiated allegations against U.S. and international political figures,” the Treasury Department said in the statement. “Derkach almost certainly targeted the U.S. voting populace, prominent U.S. persons, and members of the U.S. government, based on his reliance on U.S. platforms, English-language documents and videos, and pro-Russian lobbyists in the United States used to propagate his claims.”

Johnson has threatened to release what he calls proof of corruption that he thinks "would certainly help Donald Trump win re-election." It's unclear where the information is coming from, however, if it isn't coming from Derkach. When President Donald Trump tried to bribe Ukrainian President Volodymyr Zelensky into announcing corruption he was impeached by Congress.

The only person in the Obama State Department to have spoken to Biden about the case was Amos Hochstein, who has been asked to testify by Johnson. According to Hochstein, he was never told to do something to favor the company Biden's son worked for, Burisma.

Johnson confessed on a radio show this week that his attempts to bring down Biden using the Ukraine issue are all about stopping his candidacy for president or to cause problems in his presidency.