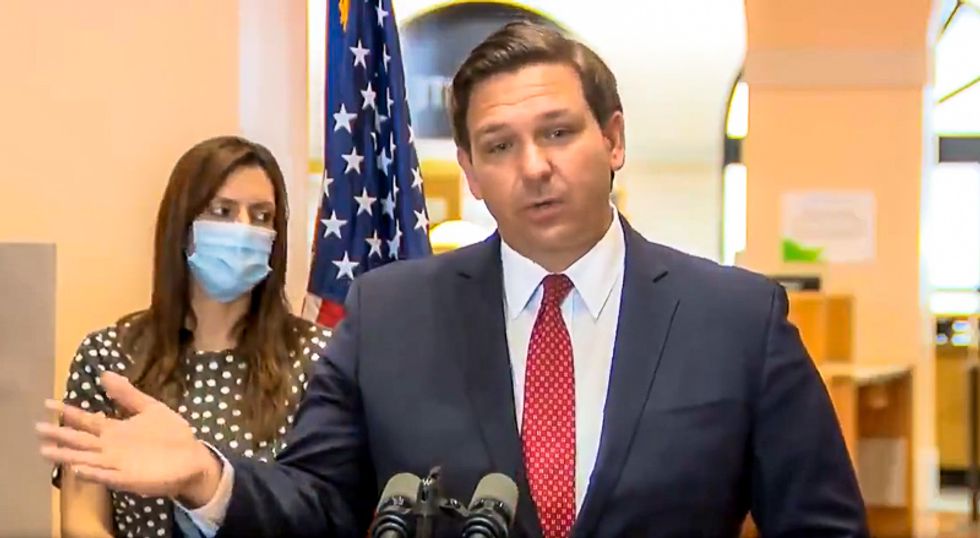 Florida Gov. Ron DeSantis spent the majority of 2020 misleading his state on the facts around the COVID-19 crisis. A bombshell report from the South Florida Sun-Sentinel detailed the ways in which DeSantis suppressed bad news, spread "dangerous misinformation," and ignored inconvenient facts about the virus.

"The DeSantis administration’s approach to managing COVID-19 information carries costs," the report said. "It supports a climate in which people proudly disdain masks, engage in dangerous group activities that could spread the disease, and brush aside information that conflicts with their political views. With partygoers packing Florida bars and holiday travelers filling hotels and guest rooms, the state faces a few difficult months before the possible relief of vaccines."

Early on in the pandemic, DeSantis was attacked for his downplaying of the virus in a state known for having a lot of elderly residents. In one scandal, DeSantis blocked public health experts from revealing the true rate of infection in Florida. Even today, the truthful number of infections and deaths for the past year isn't known. Even when there was an uptick in cases, DeSantis dismissed it as a "blip," which drew attacks from healthcare experts working in hospitals.

As the virus continued to spread, DeSantis ignored it to such a degree that newspapers around the state began to beg him for help publicly.

A July expose from the Washington Post labeled DeSantis a "failure" for opting to prioritize politics "divorced from scientific evidence."

“As Florida became a global epicenter of the coronavirus, Gov. Ron DeSantis held one meeting this month with his top public health official, Scott Rivkees, according to the governor’s schedule. His health department has sidelined scientists, halting briefings last month with disease specialists and telling the experts there was not sufficient personnel from the state to continue participating,” the newspaper reported.

In the Sun-Sentinel report cites "50 people, including scientists, doctors, political leaders, employees of the state health department, and other state officials, as well as more than 4,000 pages of documents." The extensively-sourced reporting walks through a shocking timeline of intentional actions that lead to the deaths of thousands.

"He is encouraging people who are of the opinion that the virus is not as severe and profound as others say it is and putting politics before science," the report cited Thomas Unnasch, co-director of the Center for Global Health and Infectious Disease Research at the University of South Florida.

Read the bombshell report at the South Florida Sun-Sentinel.