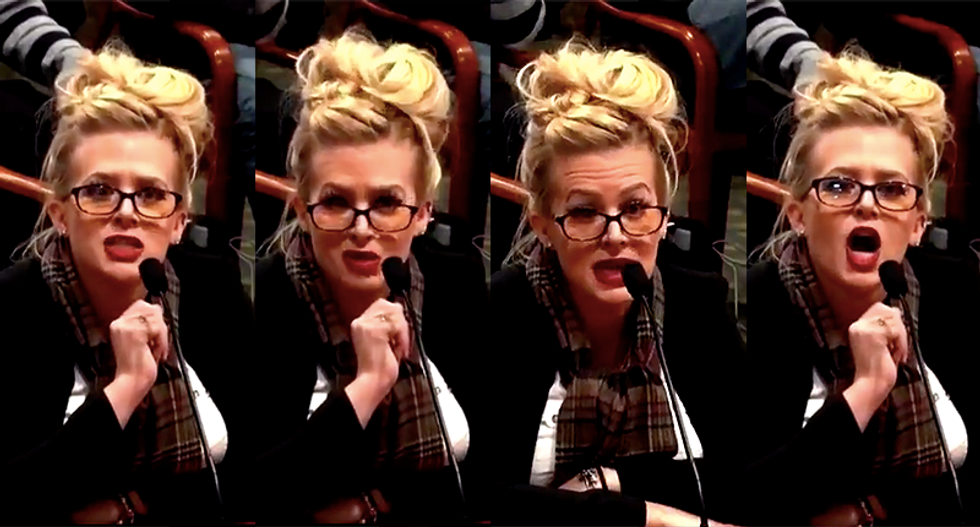 Rudy Giuliani's election fraud hearing went off the rails Wednesday evening as one woman monopolized the comments section with a series of rants.

Some speculated if the woman was intoxicated while others wondered if she'd been using Gov. Rick Perry's "smart glasses" as a talking stick. One Michigander explained, however, that some people in the state simply talk that way.

See the comments in the tweets below:

one thing i believe with all my heart is that, for years, republicans have just passed around rick perry's glasses… https://t.co/QT0aSo2tub
— Ashley Feinberg (@Ashley Feinberg)1606965424.0

Every time I feel like I’m getting somewhere with my agreessive “shut down this farce and punish those responsible”… https://t.co/B05ka3MYJE
— Elie Mystal (@Elie Mystal)1606966993.0

Even Rudy Giuliani is trying to calm down the lunatic pro-Trump witness at a hearing in Michigan. And he married h… https://t.co/Uy9bbujghl
— JRehling (@JRehling)1606966997.0

This is who the MAGA regime put up as a lead witness in Michigan to help prove their case of nonexistent voter frau… https://t.co/tEyNrT3Xuf
— Ricky Davila (@Ricky Davila)1606967361.0

Absolutely LIVING for the fact that Cecily Strong is trending because of that drunk Michigan lady in court for Trump https://t.co/YlBQfHpAIo
— Abby Wise, MSc (@Abby Wise, MSc)1606965909.0

at this point the only question is whether she’s going to be played by Kate McKinnon, Cecily Strong or Chloe Fineman https://t.co/nydZuPl6H6
— Dave Itzkoff (@Dave Itzkoff)1606964067.0

Things are going great when even Rudy is leaning over saying “hey can you be less freaking crazy?” https://t.co/ffIao4VQoP
— Fred Wellman (@Fred Wellman)1606964533.0

Even Rudy Guiliani can't keep up with Victoria Jackson. She's out of control & making a mockery of Democracy. https://t.co/VHd6eUF4fF
— Peter Morley (@Peter Morley)1606967778.0

Discount Cecily Strong went so off the rails that even Rudy looks concerned about her https://t.co/dTJZ94jGgs
— Santiago Mayer (@Santiago Mayer)1606968522.0