‘Outcasts and cranks’: Analyst describes Trump’s final days as being similar to his first 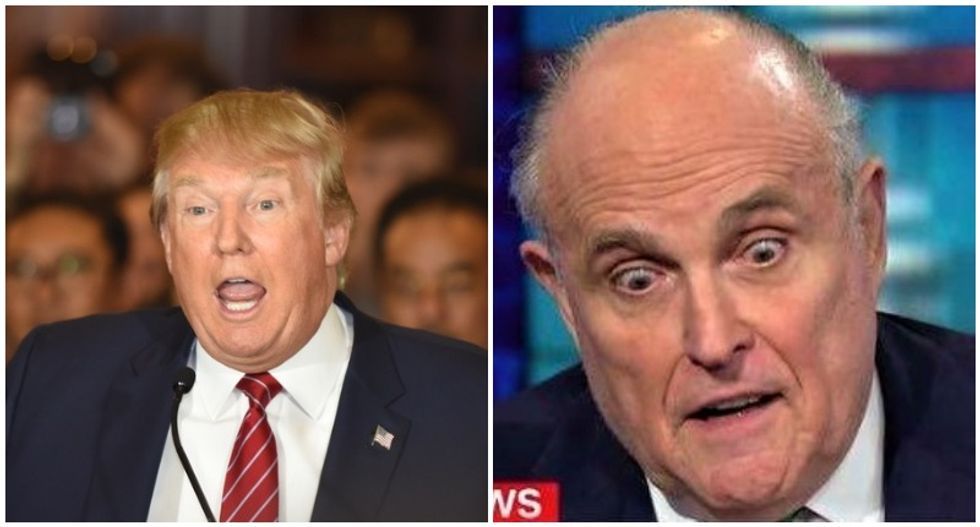 Washington Post reporter Philip Bump wrote in a Tuesday analysis that President Donald Trump is essentially ending his presidency the way it began, surrounded by "outcasts and cranks."

Trump's top lawyer Rudy Giuliani has spent the past several weeks filing lawsuits all over the country in an attempt to take back the 2020 election from President-elect Joe Biden. It's fitting as Politico Magazine asked in Sept. 2016 "Is Rudy Giuliani Losing His Mind?" Now, Giuliani is now begging for a pardon, assuming that he will be investigated for potential crimes he committed for Trump over the past four years.

During that election, Trump seemed like a long-shot, leading traditional Republican campaign experts to align themselves with more moderate candidates or a true conservatives.

"The result was that Trump’s campaign was as motley a crew even as the general election approached as it was at its outset," Bump explained. His campaign chairman was Paul Manafort, a guy whose connections to dubious international actors had pushed him outside of Republican circles. His advisory team on foreign policy was a grab-bag of names, including a guy whose credentials included a mention of participating in model U.N. Shortly before the election, Trump hired the head of the hard-right website Breitbart to guide his strategy."

Manafort is among those Trump loyalists who never outed the president for any misdeeds. While he's under house arrest, Manafort is rumored to be looking for a pardon as well.

Trump came into office claiming that as an "outsider" he would bring leaders from the business world to the Washington government and get rid of the political elite. Over time, however, Trump brought in more secretaries with political experience. Former Rep. Mike Pompeo (R-KS), Gen. John Kelly, Gov. Rick Perry (R-TX), Rep. Ryan Zinke (R-MT), former Attorney General Scott Pruitt (R-OK) and other members of the Republican establishment.

With the announcement of his "elite strike force," Trump went from a series of high-powered legal firms to a collection of legal cast-offs who are drawing the ire of judges they appear before.

"This was to a campaign legal effort what Roger Stone, the model U.N. guy and Trump’s first campaign manager Corey Lewandowski were to a presidential campaign: what was left when the establishment turned its back," wrote Bump. "Just as the political world had been skeptical of Trump, the legal world came to be."

Bump closed by saying that Trump is bringing himself back to his 2015 and 2016 roots.

"His team is loyal, sure, but also made up largely of people who weren’t likely to land gigs within the D.C. establishment," said Bump. "Trump and his supporters often see that as a positive. Fair enough. In this case, though, the end result will almost certainly not be a surprise victory by the gang of outsiders. It will, instead, be that the president leaves office having spent at least a month encouraging a dubious team’s efforts to erode confidence in the outcome of the election."