'This guy will live in infamy': MSNBC's John Heilemann rips Bill Barr as 'most corrupt attorney general in history' 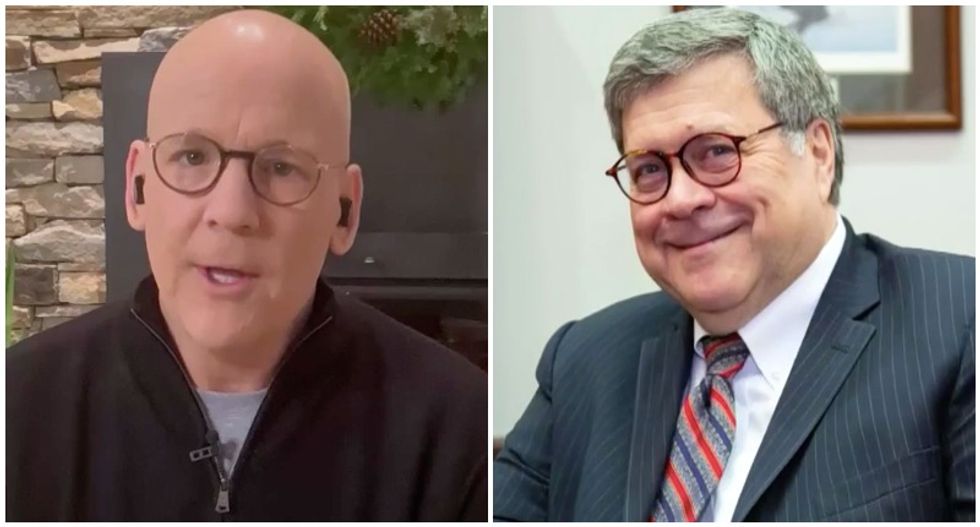 MSNBC's John Heilemann bashed outgoing Attorney General William Barr as the "most corrupt" in history, and refused to credit him for stepping aside rather than undermine U.S. democracy.

The attorney general resigned Monday as President Donald Trump continues trying to overturn his election loss to Joe Biden, and the "Morning Joe" contributor said Barr apparently was unwilling to rip up the U.S. Constitution.

"Barr would not come to his aid in this moment during this attempted coup," Heilemann said. "He obviously -- you have made this point many times, when push came to shove, I think Bill Barr is one of the most corrupt, overtly political and, I would say, savagely effective attorneys general in the history of the country, and when I say savagely effective, I mean in pursuing Trump's political aims, and this guy will live in infamy as probably the worst and most corrupt attorney general."

Host Joe Scarborough said Barr was protecting himself, and not the Constitution, by resigning.

"Let's be very clear," Scarborough said. "He would not get involved in a coup that would have landed him in jail, but, yeah, before that moment, yes, he was the worst and most corrupt attorney general in American history."

Heilemann agreed, and pointed out that Barr had willingly participated in a scheme to undermine Biden before his presidency even began.

"I think in the end, you know, this last straw, you know, for Trump the fact that Barr wouldn't put his name and put his shoulder into this attempted coup," Heilemann said, "and these revelations about the fact that Barr, you know, decided what to do what an attorney general should do in the closing days of the election, which is not the way to interfere like [James] Comey did in 2016 to tilt the election to Trump, and I'm sure Trump is in a fury that Barr knew about the Hunter Biden investigations and did what Justice Department policy would have him do, not to make fact the fact of the investigation. I think the question with Barr leaving is, you know, what now becomes of the Hunter Biden matter? It's a matter of enormous consequence."

"Is Donald Trump with a now acting attorney general, the deputy in the department stepping up into Barr's position, is Trump going to have a special counsel appointed to leave another obstacle, another roadblock, another challenge for Joe Biden at the very outset of the administration?" Heilemann added. "I think we have to keep an eye on this going forward because we know Donald Trump is going to try to destroy, to poison, Joe Biden's presidency from Day One and this is right now the most obvious method, the most obvious path towards doing that would be to exercise political pressure in the Department of Justice in the lame-duck period to get some action on the Hunter Biden matter and leave that steaming turd on Joe Biden's doorstep, and I think we have to pay close attention to this over the next few days."