The Department of Justice has additional evidence against Donald Trump that it has not publicly revealed, according to a new court filing.

On Friday, the DOJ officially appealed Trump-appointed Judge Aileen Cannon's controversial appointment of Special Master Raymond Dearie to oversee the documents the FBI seized from Mar-a-Lago. The document was filed with the 11th Circuit Court of Appeals in Atlanta.

"In a 53-page brief before the U.S. Court of Appeals for the 11th Circuit, in Atlanta, the Justice Department broadly challenged the legal legitimacy of orders last month by Judge Aileen M. Cannon, who blocked investigators from using the materials and appointed an independent arbiter to sift them for any that are potentially privileged or Mr. Trump’s personal property," The New York Times reported. "The Justice Department already succeeded in persuading a panel of the Atlanta-based court to exempt about 100 documents marked classified from Judge Cannon’s move — a decision the Supreme Court declined to overturn this week."

In a footnote on page six of the appeal, DOJ explained it has additional evidence that Trump had classified documents at his Florida resort.

"Here and before the district court, the government has referred to evidence developed in its investigation to inform the courts of the relevant facts," DOJ wrote. "Where possible, the government refers to portions of the affidavit accompanying its search warrant application that have been unsealed or to other information in the public record."

"Of necessity, however, the government cannot publicly disclose all the sources of its evidence, particularly while the investigation remains ongoing," DOJ noted. 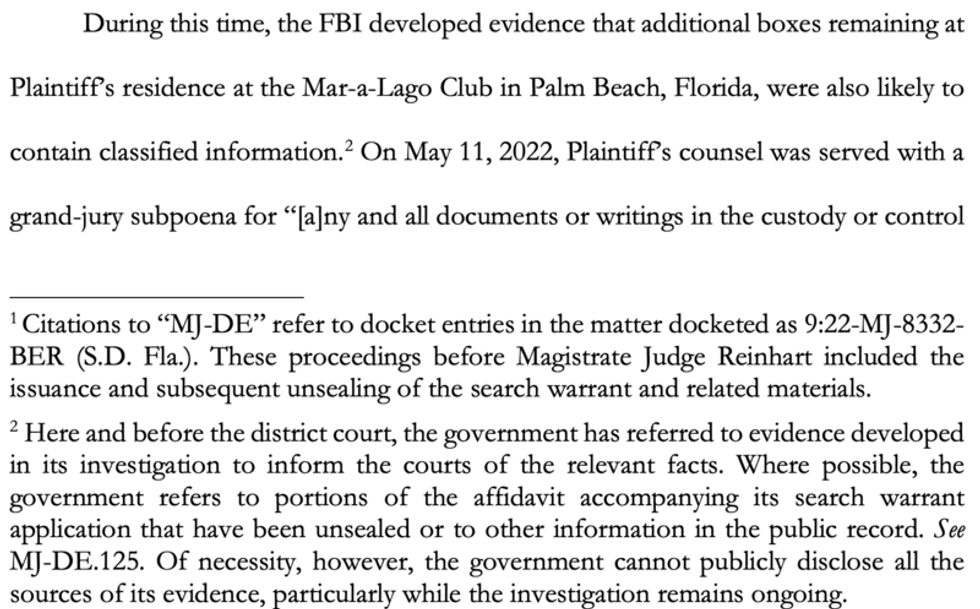