Exiled Chinese billionaire Guo Wengui announced on Gettr on Thursday that he would be shutting down his GTV video platform, Mother Jones magazine reported.

"Guo, who has cultivated an image as a foe of the Chinese Communist Party, blamed the company’s closure on data tampering by “the Communist Party," the magazine reported. "But the shuttering of the site, which featured hours-long daily videos of Guo and translated versions of Bannon’s War Room podcast, came weeks after Guo filed for bankruptcy in the wake of a court ruling ordering him to pay about $250 million to a creditor suing him for breach of contract. And that ruling was just his latest legal setback. In September, the Securities and Exchange Commission charged GTV with conducting an illegal stock offering and ordered it and a parent company to pay more than $450 million to compensate investors."

GTV has been described as the "linchpin" of disinformation about the coronavirus pandemic and the 2020 presidential election, with Guo being described as his "sugar daddy."

"GTV formed the center of a media empire Guo launched with Bannon’s input and assistance. Like other Guo ventures, the site trafficked in conspiracy theories, including claims that Chinese hackers altered votes to steal the 2020 election from Donald Trump and that Covid is a Chinese-designed bioweapon," the magazine reported. "Guo’s GTV also played a role in efforts by Trump backers to smear President Joe Biden’s son Hunter. In October 2020, an unknown GTV user posted videos that appeared to show Hunter Biden using drugs and engaging in sexual activity."

Bannon also has a weekday podcast, the "War Room," which has been described as being a "religious crusade" for insurrectionists — which is shifting power in the Republican Party.

In 2020, federal agents arrested Bannon on board Guo's 152-ft yacht for fraud connected to a private effort to build Trump's border wall. As one of his final acts in office, Trump pardoned Bannon. 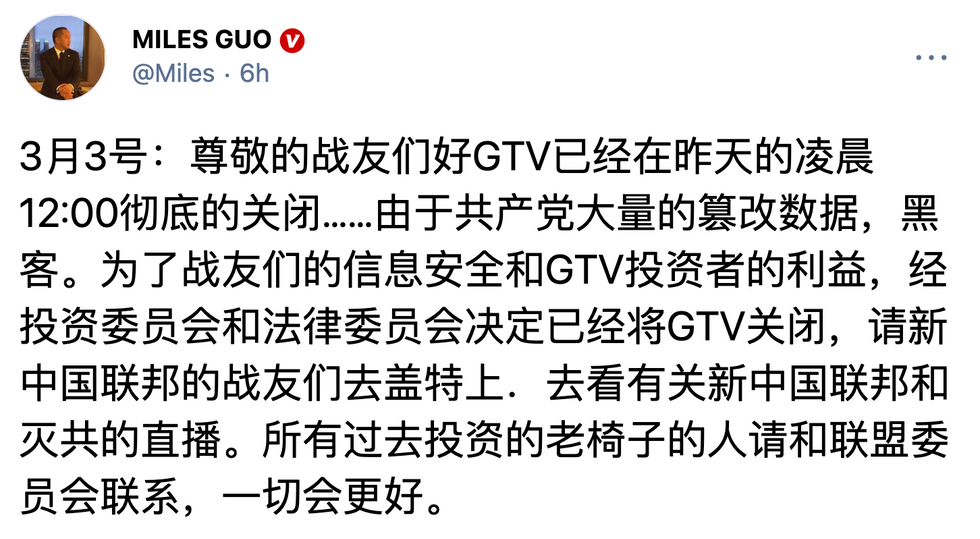