All-villain team: The 62 who voted against the bipartisan hate crimes bill are the worst of the worst GOPers in the House 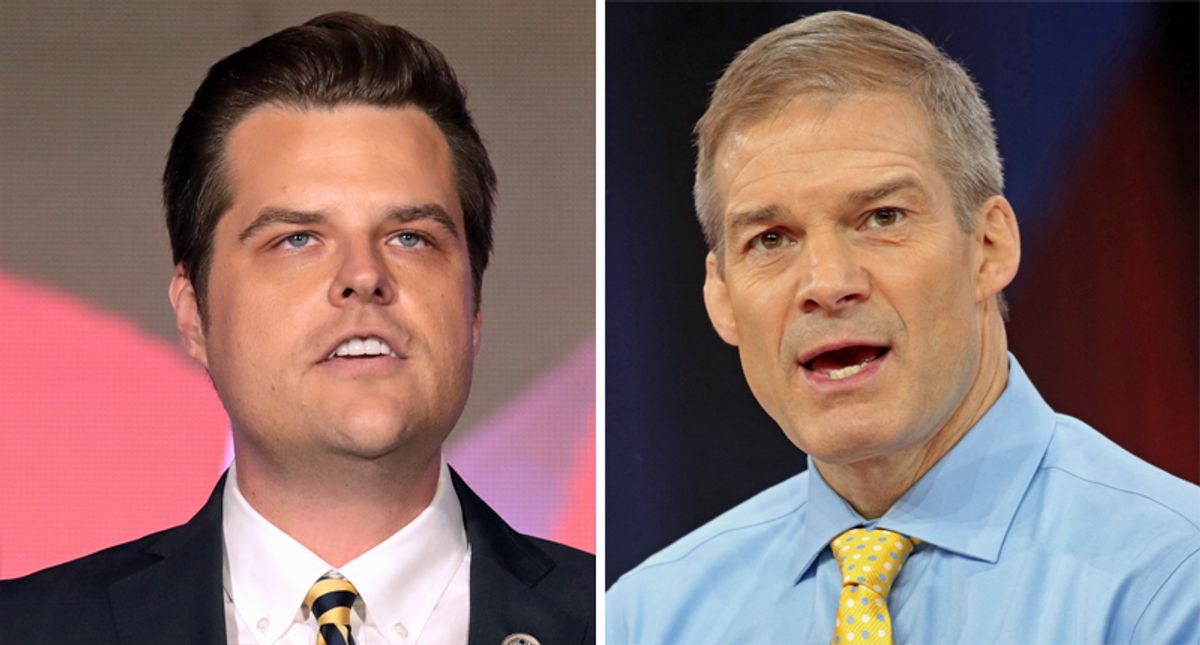 The "COVID-19 Hate Crimes Act" signed into law Thursday by President Joe Biden has been hailed as a rare breakthrough in the partisan gridlock that poisons American politics.

That's a fair assessment, given that the law was passed by whopping margins of 94-1 in the Senate and 364-62 in the House of Representatives. The big story was the bipartisan goodwill -- however fleeting -- that accompanied a measure that will, among other things, provide long-overdue greater protections to members of the AAPI community.

But every silver lining has a cloud in Washington D.C. So it's not unreasonable to wonder who would possibly stoop so low as to vote against a resolution "condemning the horrific shootings in Atlanta, Georgia on March 16th and reaffirming the House's commitment to combating hate, bigotry, and violence against the AAPI community."

The answer is 63 Republican members of Congress. But not just any 63.

They are the worst of the worst, a veritable who's who of the most hateful, treasonous and otherwise irrational voices on the national landscape.

Missouri Senator Josh Hawley reveled in his lone "no" vote in the Senate. His quest to claim the title as most bodacious seditionist this side of the Dear Leader could not have been more transparent.

On the House side, 62 members shamelessly stood apart from 147 other Republicans to take a collective public stand on behalf of hatred. All of them have terms that expire in 2022 -- and almost none have anything to fear electorally other than perhaps a primary from their right -- so they fired stray bullets in the culture war. Or perhaps they really love hate.

Considering that their fellow 147 Republicans have a pretty clear record of enabling Trump and his racist agenda, it's no small feat to put together a group that makes the others moderate in comparison. They've definitely planted their QAnon-ish flag.

What has emerged is the handiest roster of the nastiest scoundrels in the House.

Most striking about the 62 House members-- overlooked in the media focus on bipartisanship -- is the high-profile nature of this rogue's gallery. Virtually every major reprobate of the Far-Right defiantly went out of the way to make it more difficult to protect the AAPI community from acts of hatred.

It's an all-villains registry featuring the biggest of the big names: Matt Gaetz, Lauren Boebert, Marjorie Taylor Green, Mo Brooks, Louie Gohmert, Jim Jordan, Madison Cawthorn, Paul Gosar, Ronny Jackson, Andy Biggs and more. If they're in Congress and have made a public splash on behalf of insurrection, racism and the like, they're almost certainly listed in this program guide.

To borrow a phrase offered today by ultra-conservative Rep. Liz Cheney, these people embody "evil lunacy." And though not all of the 62 hate enablers are household names, as a group they share one trait: This isn't their first act of treachery, just the most recent.

Of the 62 members, 40 were among those joining as a group the disgraced and dismissed December lawsuit in Texas to overturn the results of the 2020 election. A unanimous U.S. Supreme Court flipped it aside.

Another 17 of the members weren't part of that legal effort because they hadn't yet taken office. These freshmen members of Congress represent 38% of the Republican class of newcomers--a chilling glimpse into the direction the party is heading.

Of the remaining five members, three -- Gosar, Cole and Davidson -- didn't join the lawsuit (citing concerns over federalism) but did vote to overturn the election on January 6. The others, Massie and Roy, have still continued to support the Big Lie.

Sixty of the 62 members voted to overturn the results, with two -- Mace and Massie -- saying Congress lacked power to do so (while repeating the Big Lie about the election having been stolen from Trump).

In a strange footnote, Cole claims he voted "no" by mistake on the anti-hate bill and had that read into the Congressional record. His official "no" vote stands in the final count.

Here, as reported at CNN, is an alphabetical list of the House Republicans who voted against the COVID-19 Hate Crimes Act: