John Oliver's reminder about electing GOP clowns: 'They're funny but they're also terrifying' 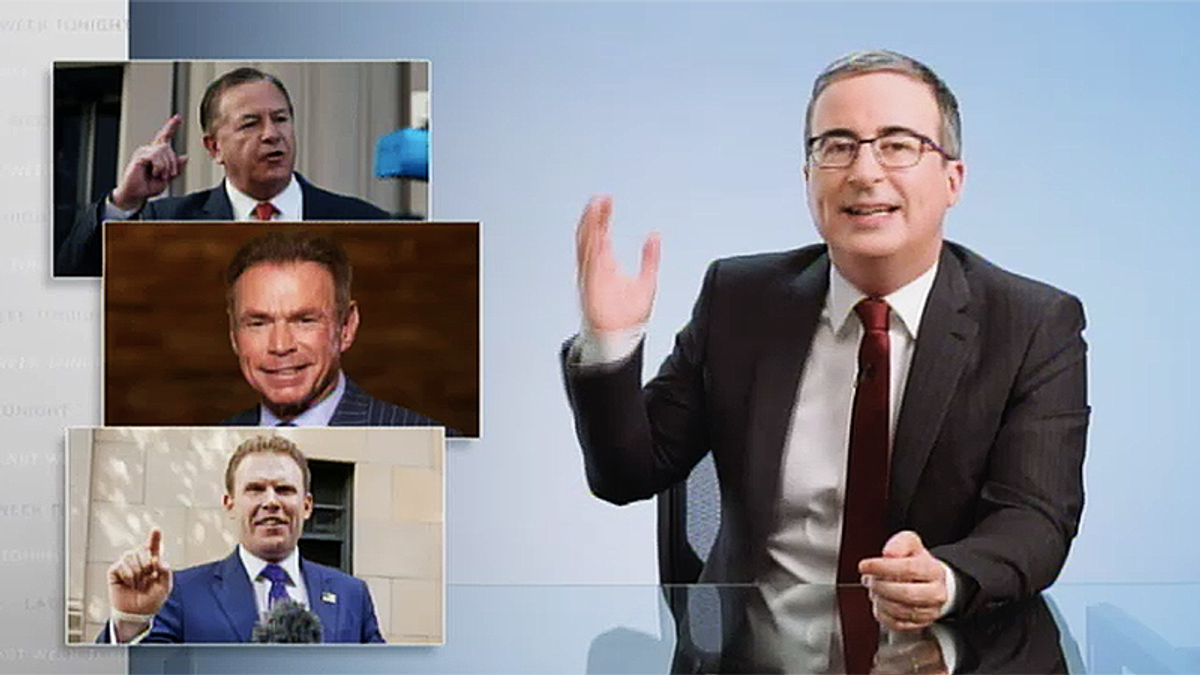 He began by talking about the District Attorney race in Philadelphia, where the white Republican candidate claims that he "understands Black people just about as well as a Black person. I'm not, just, I'm not going to say equal, but pretty good." A. Charles Peruto's reason was that he was born in West Philadelphia and had a friend he grew up with named Michael Jackson.

It prompted Oliver to smirk over the humiliating claim.

"Ok, that guy, sitting in that office, he understands Black people as well as any Black person, isn't great," Oliver explained. "Even though he does slightly walk it back by saying, 'I'm not going to say equal, but pretty good. A level of nuance not seen since Plessy v. Ferguson."

Oliver explained that Peruto's whole video is 35 minutes long and done in a single take. He noted it's as if his family simply wouldn't listen to him anymore, so he whipped out a webcam.

"But he does speak to the post-Trump trend where extreme cartoonishness isn't a dealbreaker for candidates. It's a selling point," said Oliver. "

He then showed the announcement video of Mark McCloskey, who pointed a gun at Black Lives Matter protesters as they marched down his street to the Mayor's house. McCloskey claimed, falsely, in the ad that the "angry mob came to destroy my house and kill my family." He also wore a plaid shirt and stood in front of a tractor despite being a wealthy trial lawyer who lives in a mansion. Oliver noted that he looked like what you'd get if Sean Hannity f*cked a packing peanut.

"Quick sidenote," Oliver continued, "if there are nationwide protests against racism and your first response is 'they're coming for me,' maybe think about what that says about you."

Oliver explained that McCloskey would have been the craziest announcement this week if it weren't for Andrew Giuliani, who claimed 50 years of political experience while only being 35 years old.

"One," the host began with his takedown. "Do you think you look young? Because if I had to guess your age, I'd put you somewhere between unhealthy 45 and lying about an early retirement to avoid a sexual harassment suit becoming public."

Oliver thinks that the younger Giuliani is lying about his experience because he's counting being held by his father after losing his first mayoral race.

Andrew also claims to have been a professional golfer, but the reality is he was kicked off his Duke golf team after throwing an apple so hard into someone's face that it exploded. He then went on a golf reality show where he pissed off everyone on the show.

"Man, he would talk to this door if it had ears," his competitor, Mike, said of him.

"Andrew Giuliani is a nightmare! Imagine being the worst person on a golf reality show!" Oliver joked.

He closed by explaining that these Republican cartoon candidates are basically clowns, "but just like clowns, they can be funny, but they can also be really f*cking terrifying." But as Marjorie Taylor Greene and Donald Trump taught us, such clowns can actually get elected.