According to a report from Vice's David Gilbert, a Trump-supporting Tulsa pastor attempting to take on Oklahoma incumbent Sen. James Lankford (R) tried to take page from the conservative internet trolling playbook and get himself banned on Twitter to garner attention for his dying campaign.

On Thursday, Jackson Lahmeyer fired off a tweet to his almost 18,000 followers asserting: "5 More Politically Incorrect Truths: Jan 6 Was Not An Insurrection Masks Do Not Work Abortion Is Murder America Is A Christian Nation Fauci Is Still A Mass-Murderer," which can be seen below: 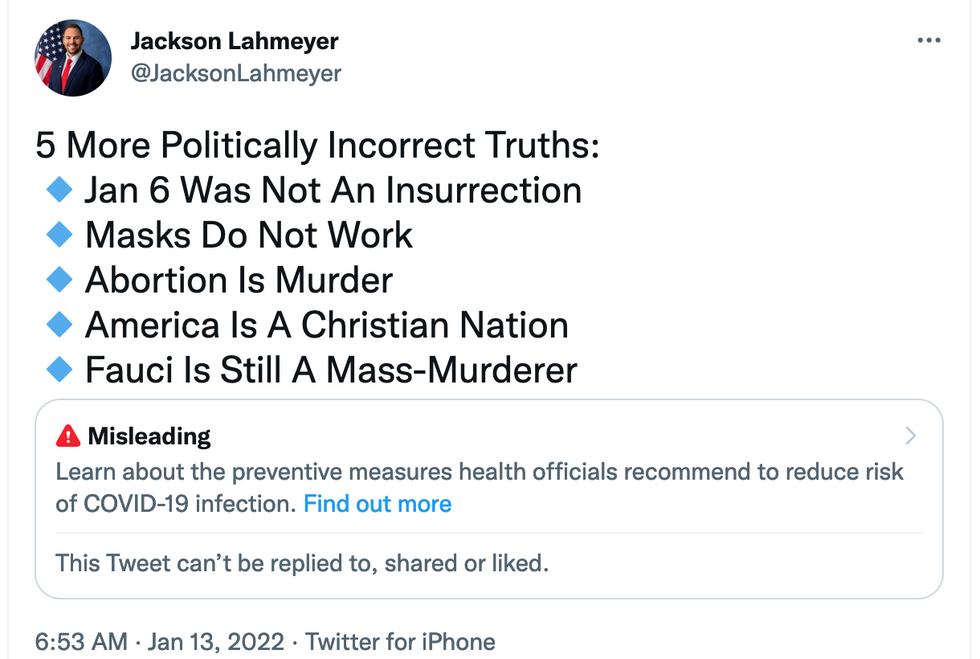 As Devine writes, Lahmeyer simultaneously sent out an email to his supporters claiming he was going to get banned, following in the steps of Rep. Marjorie Taylor Greene (R-GA) who saw one of her Twitter accounts permanently banned which she, in turn, turned into a fundraising opportunity and rallying cry for her supporters.

Lahmeyer wrote, "I just tweeted 5 Politically Incorrect Truths and the Left is losing their minds on Twitter right now. With the volume of Leftists reporting the tweet there is a chance I might get suspended from Twitter or even banned.”

WATCH: Capitol rioter runs to local media to clear his name after feds unseal criminal complaint against him

Unfortunately for him, Twitter not only didn't suspend him -- which derailed his stab at Twitter martyrdom -- but they left his tweet up with a warning and also dismantled his attempt at going viral by decreeing, "This Tweet can't be replied to, shared or liked."

As Devine explained, Lahmeyer's gambit was likely aimed at not only boosting campaign contributions but also at stopping his slide in the polls after seeing his numbers plummet from 21% in October to 8% now compared to Lankford's 46%.

As the Vice report notes, getting banned by Twitter is becoming a badge of courage for conservatives who then move on to other social media platforms.

"Ever since Trump was banned from Twitter in the wake of the Capitol riot last January, his supporters have used the decision as “proof” there’s an anti-conservative bias on social media platforms. There is not an anti-conservative bias on social media platforms. Despite having no evidence to back up their claims, GOP lawmakers and candidates continue to use this lie to rile up their supporters," the report states with Devine adding, "As for Lahmeyer, he’ll just have to try harder to get himself banned–and he may be able to get some tips this weekend when he speaks at the latest installment of the ‘ReAwaken America’ conspiracy conference series in Phoenix Arizona."

IN OTHER NEWS: 'Complete sociopath': Stewart Rhodes' estranged wife warns he is a 'dangerous man'