Oath Keepers lawyer: 'I hope they get the real perpetrators — Flynn, Byrne, Powell'

Editorial Note: This story has been updated to include a response from Sidney Powell.

The arrest of Kellye SoRelle, the Texas attorney associated with the Oath Keepers on Thursday, on conspiracy to obstruct an official proceeding and other "offenses" potentially marks a new stage of the prosecution of the perpetrators of the Jan. 6, 2021 attack on the US Capitol.

SoRelle describes herself as the “general counsel” for the Oath Keepers. The far-right militia's founder Stewart Rhodes and eight other members face charges of seditious conspiracy.

But, SoRelle says she served as interim leader of the Oath Keepers for two weeks following Rhodes’ arrest in January 2022.

Since her first appearance in federal court in Austin on Thursday, SoRelle has been tweeting about her case.

“So, the clear question is… [if] I am the patsy,” she tweeted. “That means the entire election challenge front was all a set up for the conservatives, because they are all protected. Good luck y’all. They won’t stop with me.”

“Only thing I have to say, I hope they get the real perpetrators — Flynn, Byrne, Powell etc., those behind the Big Lie that set up the conservatives,” SoRelle told Raw Story. 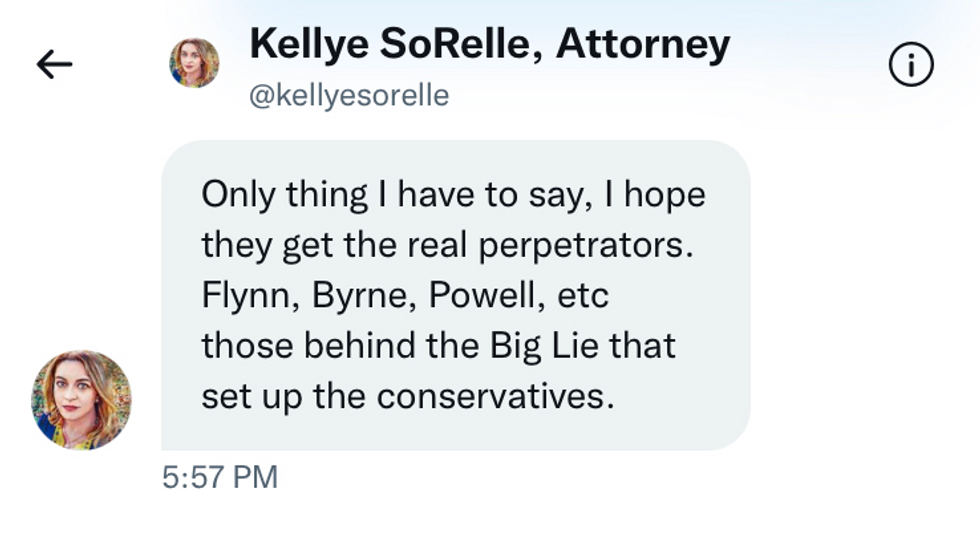 "I abhor violence, was not in DC January 6, and urged everyone not to be in DC then," Powell told Raw Story. "I cooperated fully with the January 6 Committee. Ms. SoRelle is way out of line."

Byrne responded by text with one word: “Silly.”

Joe Flynn, the brother of Michael Flynn, was more blunt: “F*** off.”

SoRelle previously testified by video before the House Select Committee to Investigate the Attack on the US Capitol. During a brief clip of SoRelle’s testimony that was presented to the public in July, SoRelle implicated political strategist and longtime Trump ally Roger Stone, InfoWars host Alex Jones and “Stop the Steal” organizer Ali Alexander.

When an investigator asked her to confirm that Stone, Jones and Alexander were “the leader of these rallies,” SoRelle responded, “Those are the ones that became like the center point for everything.”

A lawyer for Stone responded shortly after the hearing that his client “engaged in only legally protected, First Amendment activities.”

Court documents indicate that SoRelle was actively involved in the Oath Keepers’ tactical planning while also volunteering for legal efforts to overturn the election. Meanwhile, previous reporting shows, SoRelle cultivated ties with other election denier groups, including Latinos for Trump and Veterans for Trump, that were on the ground at or near the Capitol on Jan. 6.

The indictment unveiled against SoRelle on Thursday alleges that she knowingly combined, conspired, confederated and agreed with other persons to corruptly obstruct, influence and impede Congress’ certification of the Electoral College vote. To date, the government has not revealed any other co-conspirators in its conspiracy case against SoRelle.

In a transcript of a Nov. 9, 2020 GoToMeeting conference call that was filed in court earlier this year, SoRelle updated members of the Oath Keepers on her involvement in legal efforts to challenge the election. SoRelle has said elsewhere that she volunteered with Lawyers for Trump, and was sent to Detroit to investigate election irregularities.

“And then you have the Giuliani pals, I guess, previewing the Campaign pod that’s trying to solve the mystery of the ballots,” SoRelle told Oath Keepers members during the conference call, referencing Rudy Giuliani, then-President Trump’s personal lawyer. “So, I’ve been in communication. I obviously work for the [Republican National Committee] version of it, and then I’m in — I like the Q crowd, they’re kind of fun — and then I’ve been meeting with the campaign crowd.”

On Dec. 18, 2020, an open letter from Rhodes and SoRelle was published, calling on Trump to invoke the Insurrection Act.

Calling on Trump to invoke the Insurrection Act and call the National Guard into service, Rhodes and SoRelle warned that if the president failed to act and left office prior to Joe Biden’s inauguration, it would force “We the People to fight a desperate revolution/civil war against an illegitimate usurper and his Chicom puppet regime.”

Without presenting evidence, the document claimed that “through well-orchestrated mass vote fraud, the Communist Chinese and their domestic enemy allies are about to install their illegitimate puppet, Joe Biden.” As federal and state courts dismissed election challenges and state officials refused to capitulate to Trump’s demand to reverse the results, Rhodes and SoRelle claimed that “complicit traitors have been put into place in every branch of government (legislative, executive, judicial) at every level (local, state, federal).”

“Know this,” Rhodes and SoRelle concluded in their overture to Trump. “Millions of American military and law enforcement veterans, and many millions of more loyal patriotic American gun owners stand ready to answer your call to arms, and to obey your orders to get this done.”

Rhodes and SoRelle’s call paralleled an effort by retired Lt. General Michael Flynn, lawyer Sidney Powell and former Overstock.com CEO Patrick Byrne, who paid an unexpected visit to Trump in the Oval Office to ask him to deploy the National Guard to seize voting machinery, which also took place on Dec. 18.

As Trump supporters converged in Washington, DC in the days leading up to Congress’ scheduled session to certify the electoral vote, SoRelle and Rhodes appeared to network with a wide array of other figures who were vociferously promoting the view that the election was stolen.

Most famously, perhaps, SoRelle was present during a Jan. 5 meeting between Rhodes and Proud Boys national chairman Enrique Tarrio in a DC hotel parking garage shortly after Tarrio was released by a DC court and ordered to leave the city, with charges pending for burning a BLM flag stolen from a Black church and illegal ammunition. Bianca Gracia, president of Latinos for Trump, and Joshua Macias, cofounder of Veterans for Trump, were also present during the brief meeting.

“I want you to meet this attorney, Kellye,” Gracia said. “She’s from Texas.” Then, Tarrio and Rhodes shook hands, and exchanged pleasantries.

At the time, Macias was out on bond after being charged with weapons offenses outside the Philadelphia Convention Center, where votes were being tabulated on Nov. 5, 2020. Antonio LaMotta, who was also charged alongside Macias for weapons offenses in Philadelphia following the election, was arrested last month on charges related to the Jan. 6, 2021 attack on the US Capitol.

SoRelle, Macias, Gracia and Rhodes were together again that day for a roundtable discussion livestreamed on Facebook from a hotel room by Virginia state Sen. Amanda Chase.

“That same community are the most well-trained, crucible-trained combat veterans that this world has ever seen,” Macias said during the livestream. “And they are the brother, the sister, the uncle… those that would open up and help you buy your shoes, okay. These are veterans out there that are well trained that can… be brought in as a special group and be utilized in any shape or form at [Trump’s] disposal. And we have a million in Vets for Trump just right now, standing at the ready, let alone those within one degree of separation.

“So, here we sit at a precipice of change where we have a community that’s ready to step in, do what is needed,” Macias continued. “The president has all the power and the authority to do so, and he has the backing of We The People….”

Rhodes concurred, echoing a point made in the Dec. 18 open letter that he and SoRelle addressed to Trump.

“In fact, us veterans, until age 65, under federal statute, still are subject to being called up,” Rhodes said. “That goes for seventeen to forty-five if you’re not a veteran…. He can call us up right now and put us to work.”

SoRelle was a featured speaker, alongside Gracia and Macias, at a “Freedom Rally” co-hosted by Latinos for Trump and Virginia Freedom Keepers near the Russell Office Building on Jan. 6.

Later, SoRelle and Rhodes walked over to the east side of the Capitol, where dozens of Oath Keepers members breached the building in stack formations. In an interview last September with David Sumrall, an election denier who campaigns to support Jan. 6 defendants, SoRelle insisted she was not aware of any prior planning to breach the Capitol.

“Well, Stewart had guys that were protecting the different speakers at different events, namely Ali Alexander, who was supposed to have one literally on the Capitol grounds,” SoRelle told Sumrall. “Then, everybody’s like, ‘Well, we don’t know where everybody’s at. This is chaos. Like, what the heck?’ So, that’s why we ended up at the Capitol. We went down there just to see if he could locate his people, you know. And then next thing you take it to crazy la-la land, as in everybody’s the mastermind, and whatever.”

SoRelle has previously cast suspicion on Byrne, Flynn’s ally. In a rambling affidavit shared on Twitter last November, SoRelle claimed that a former Trump administration Department employee named Jason Funes showed her a video of a man that claimed he flew to the Capitol with Byrne and Jason Sullivan, the provocateur who filmed Ashli Babbit’s shooting. SoRelle wrote that the man, a former Proud Boy named Thad Cisneros, “was recorded stating that he flew to Washington, DC with Patrick Byrne and the Sullivan brothers, and that Patrick Byrne paid for the provocateurs to be at the Capitol.”

Funes and Cisneros both told Raw Story in June that SoRelle’s account of Cisneros’ statement on the video was inaccurate.

Byrne also disputed SoRelle’s account, but volunteered that it was possible that he flew Gracia and Tarrio from Texas to Washington, DC in December 2020.

Byrne shared a Signal thread for “TAP leadership” with Raw Story in June. The thread included personnel associated with The America Project, an election denier group in Florida that he founded with the Flynn brothers.

“Kellye is crazy and likes to make s*** up,” Joe Flynn wrote.

Gracia distanced herself from Cisneros, saying he was rumored to be an “informant.”

“At this point, everyone is either an informant or domestic terrorist,” she said.

ALSO IN THE NEWS: How Pat Buchanan and Rush Limbaugh gave rise to the dangerous movement we now know as MAGA