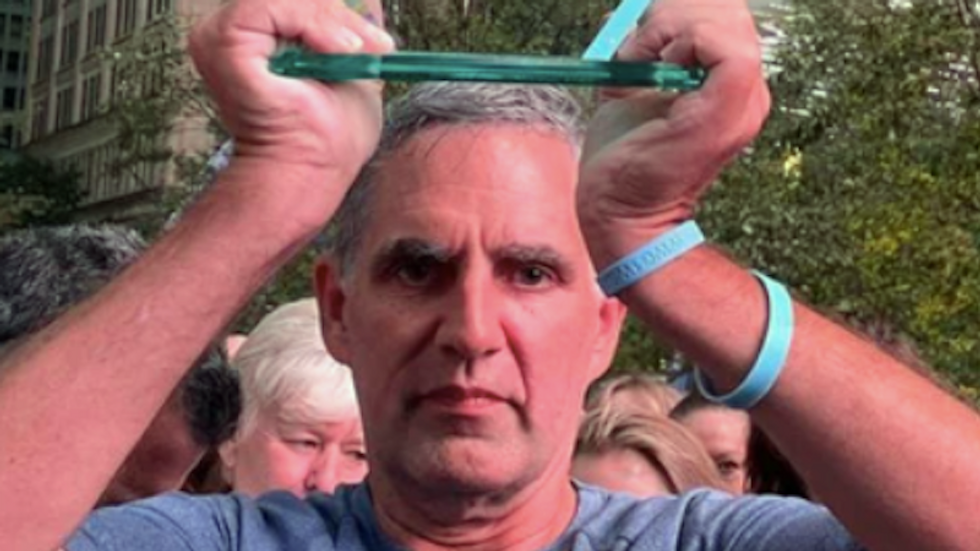 The newspaper reported he tried to fight police officers in 2019 after allegedly refusing to let his wife leave their home.

"When approached by police outside the house, Protzman told officers they didn’t have authority over him and struggled with them, 'attempting to physically overpower the officers.' He was taken into custody and charged in August 2019 with one count of domestic violence-related unlawful imprisonment," the newspaper reported. "The case dragged on for more than a year amid the coronavirus pandemic, and the charge was dismissed this June 'upon discussion with the victim,' records show."

The newspaper reported on how Protzman became a QAnon influencer.

"Protzman, 58, has accumulated nearly 100,000 social-media followers on his Telegram channel, where he goes by “Negative48,” rapidly becoming a top QAnon influencer. His channel features a stream of QAnon-created and other conspiracies, including pro-Trump memes, vaccine falsehoods and antisemitic content," the newspaper explained. "Protzman created the channel March 13, declaring he would show 'how Trump is talking in code and what the code is.' Since then, he has created thousands of additional posts."

The first post came one day after foreclosure action was filed against his home. The newspaper explained his "code."

"Protzman has been seen wearing a tinfoil hat at times and giving bizarre speeches in which he recites strings of numbers, translating words into numeric values that he claims predict the future or reveal hidden knowledge. 'I am QAnon King 174…Yes I am coming home 174. Yes John Kennedy 174. Yes I am Jesus Christ 174. Yes John Kennedy 174!' he shouted to rapt followers in Dallas during a rant in early November, posted on YouTube," the newspaper explained. "One man listening appeared to pass out during the speech. (The simple code used by Protzman, known as Gematria, assigns a number to each letter in the alphabet, so A=1 and Z=26. The numbers in each phrase add up to 174.)"

RELATED: 'Things are all on fire over there': QAnon cultists tear each other apart over Lin Wood and Mike Flynn feud

“I am looking online at this QAnon deal, and I start reading the article and I go ‘Oh my God, that’s my brother-in-law!’ Appia said. “I look at this and I start crying. This is my sister’s husband. I was going, ‘Oh, my poor sister.'”

Appia said his brother-in-law was radicalized by right-wing media.

“He got caught up in the culture. He traveled a lot through Washington listening to bloody radio stations and talking about the conspiracies,” he explained.

IN OTHER NEWS: 'Big warning signs' for indicted Capitol rioters after a Wednesday court hearing