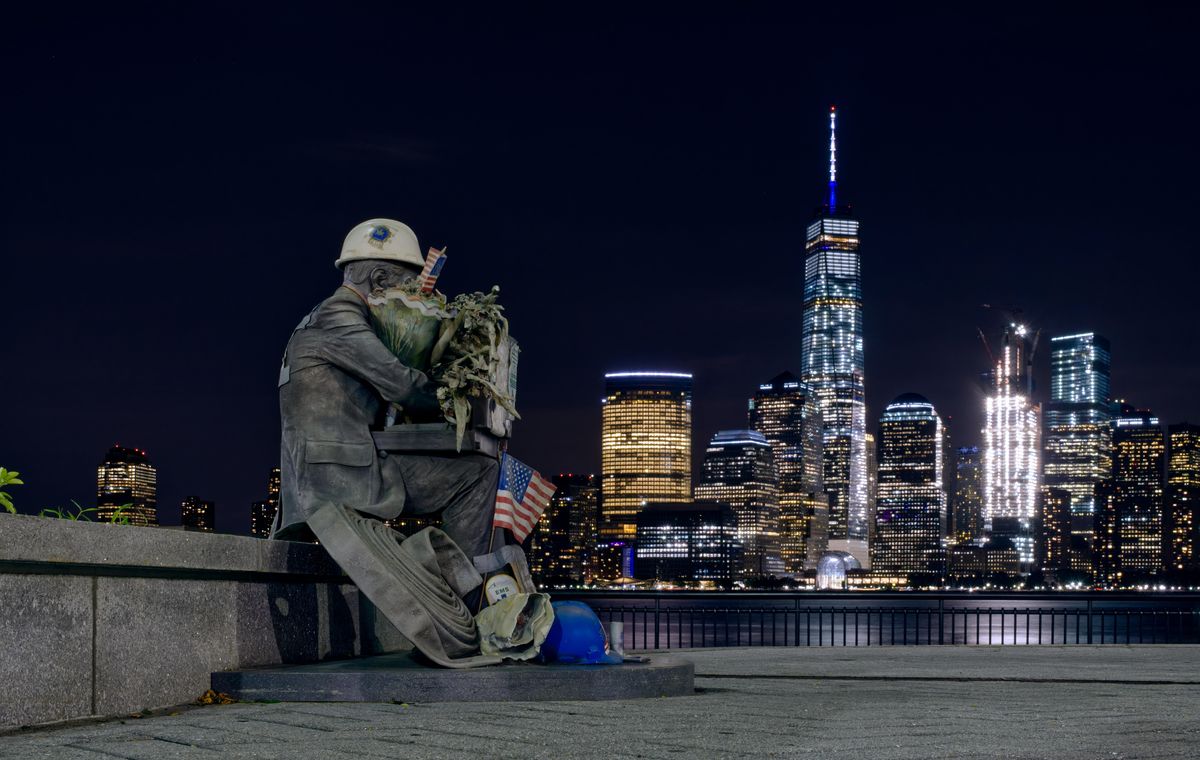 Photo by Partha Narasimhan on Unsplash

I watched people jump from the burning towers.

It was a picture-perfect day. Thousands of pieces of paper blown out of the wounded skyscrapers fluttered in the breeze, catching the crystal-clear morning light. Smoke drifted south over Brooklyn. From my rooftop a mile away the people looked tiny as they arced and accelerated on a one-way journey.

One dot split into two as they plummeted. They must have held hands, only able to summon courage by doing it together even as the punishing gravity separated them right before their demise. So many hundreds fell that witnesses on the ground said it was raining bodies. One falling woman struck and killed Daniel Suhr, the first New York firefighter known to be killed that day.

An F-16 shrieked over Manhattan, banking and passing for a close-up of the towers before roaring off.

On neighboring rooftops only a few people were watching a devastating war unfold on American soil. Months earlier on the same rooftops thousands oohed and aahed to simulated war on the Fourth of July. A camera was produced. Pictures were taken. Men posed grimly pointing at the burning towers, chance masquerading as grit. A pretty blonde posed sitting up with a knee bent and chin on hand smiling with the towers in the background, a pin-up at the end of the world.

We wondered why helicopters didn't try to rescue the desperate when the South Tower collapsed in a shower of debris sending us staggering backwards. "It collapsed," a few eventually muttered trying to sync their brains with their eyes.

Six helicopters, Coast Guard, fire department, police, formed a ring around the surviving North Tower and turned outward. We had no information. We didn't know United Airlines Flight 93 was still on its suicide mission. But there could be only one explanation. The choppers were also on a suicide mission, intent on ramming any more incoming planes. Two F-16 pilots had been dispatched with such orders. There wasn't time to arm their jet fighters. They were told to crash into UA 93, which is believed was aiming for the White House or U.S. Capitol.

At 10:28 A.M. on September 11, 2001, the North Tower fell 102 minutes after being struck. One corner gave way and the 362-foot antenna fell toward me disappearing in a plume of smoke and ash. A fireball of orange and red and yellow boiled upward hundreds of feet. We were as stunned as when the first tower fell.

An ambulance caked in debris crept down the empty street below leaving a shroud of ash in its wake. Thousands of office workers followed moments later, shuffling in stunned silence north away from the inferno at Ground Zero. Mourners at their own funeral, many were painted ghostly white by wildly toxic dust containing mercury, lead, dioxin, PCBs, and asbestos.

No one knew what was going on least of all the media. The news said eight planes had been hijacked, not four, and imaginations ran wild with what would be bombed next. Reports came in of a car bomb at the State Department, a bomb at the U.S. Capitol, bombs exploding all over Washington, D.C.

The fevered rumors dissipated quickly but not the fear. Weeks later pedestrians ran panicked down 5th Avenue away from the Empire State Building yelling, "There's a bomb." Office workers sobbed, "I can't take it anymore" outside of Grand Central Terminal after a false bomb threat emptied the complex.

A refuge from the madness emerged. The day after the attacks people began to gather at Union Square at 14th Street as the public was blocked from traveling further south. The park drew mourners, gawkers, anyone seeking comfort amid the devastation. Flyers of the missing were plastered on any available surface. Hundreds of smiling faces peered out, putting names and images to the death toll. Notes pleaded for information and help.

American flags sprouted and debates ensued about who was to blame and who should pay. But the mood was mostly one of peace. The martial statue of George Washington on a horse had messages of "Love" and "No War" chalked on its base and a peace flag taped to his outstretched hand.

"Our grief is not a cry for war" rose above the din. We experienced war. The dead were our dead. We were the ones poisoned by the smoke that billowed from Ground Zero for months. We said no to war in our name. Visiting the horrors of mangled flesh and steel on other countries would only punish the innocent. Starting new wars would end in disaster.

Days after 9/11 a friend reminded me of my own prophecy. We used to hang out on the roof at night drinking beer, the Twin Towers dominating the skyline. He told me, "'They're coming down' you would say." I shrugged. "They were such a tempting target, and we have created such hatred around the world." The second intifada had been raging for a year. Palestinians rejected a U.S.-brokered peace deal to live under Israeli apartheid. Anger across the Arab world was boiling over at us.

September 11 was not a clash of civilizations. They didn't "hate our freedoms." They hated our wars, the dictators we backed, the coups we instigated. They hated Israel's colonization of Palestine. Bin Laden and Al Qaeda used terrorism, the weapon of the weak, because their goals were geopolitical. They thought the United States would abandon the corrupt monarchs and dictators it supported throughout the Muslim world. They didn't bank on America, an enraged giant, lashing out.

By lashing out with lies and deception, America supercharged the blowback. It took all of five hours on 9/11 for Donald Rumsfeld, the butcher of Iraq, to ask if there was intelligence "good enough [to] hit SH [Saddam Hussein]." Two days later the EPA began lying to millions of New Yorkers that the toxins in the air and water were at "safe" levels. On September 20, 2001, President George W. Bush stood before a joint session of Congress and declared a "war on terror." Nations were put on notice, "Either you are with us or you are with the terrorists."

The aggression and duplicity was scaffolding for Guantanamo, enhanced interrogation, extraordinary rendition, Abu Ghraib, prisoners tortured to death in CIA black sites. At home came the Patriot Act, the massive illegal NSA domestic spying program, threats that Americans "need to watch what they say, watch what they do."

Immediately after 9/11, racists attacked and killed Sikhs simply because they wear turbans as part of their faith. Then nearly 13,000 American Muslims were rounded up and deported on flimsy if not illegal grounds, devastating communities.

Muslim neighbors in my building lost a relative in the Twin Towers. Others were being sought by FBI agents who brushed off requests for a warrant before entering the building to hunt for them. Strangers called them terrorists for the crime of having the wrong appearance.

Many New Yorkers protested the impending war. One demonstration coincided with the start of the U.S. and U.K. bombing of Afghanistan on October 7, 2001. Thousands marched against war in Times Square. Construction workers yelled, "Traitors." Tourists looked on angrily as protesters exercised their freedoms.

Osama bin Laden is dead and Al Qaeda smashed. Nonetheless, 9/11 was a catastrophic success because we failed in every way.

We failed because no matter how many times presidents have declared the war on terror over, it has never ended. We continue to wage it around the world. We radicalize new generations by supporting despots who rob their countries, brutalize their people, and rob youth of a future. We have franchised the war on terror to Israel and India, Canada and Turkey, Brazil and Russia, which use the framework of terror to persecute their own people.

We failed because the main political threat is now within. Trump's governing strategy was to bring the war on terror home. His politics of sectarianism, violence, and propaganda culminated in the attempted January 6 insurrection. That may turn out to be a dress rehearsal for a genuine fascist takeover if Trump gets into office again.

We failed because the gravest threat is climate change. What if instead of spending 20 years to fight a losing war, we had fought climate change? Floods, fires, and droughts from a warming globe are far deadlier and disruptive than Al Qaeda ever was. And they will get worse and worse.

If there is a glimmer of hope it's that Biden ended the war in Afghanistan. The exit may have been messy, but there is no good way to lose a war.

Biden's team seemed to have learned a lesson, even if it was 20 years late. It's hard to say that about the rest of the political and pundit class. They attacked Biden for not continuing a war that was an abomination, that was unwinnable, and contrary to their fantasies, harmed far more Afghan women than it helped.

I will never unsee people jumping from the burning towers. But even in that moment of shock I knew politics as usual would lead to disaster. The stakes are much higher now. So too is the danger of politics as usual.