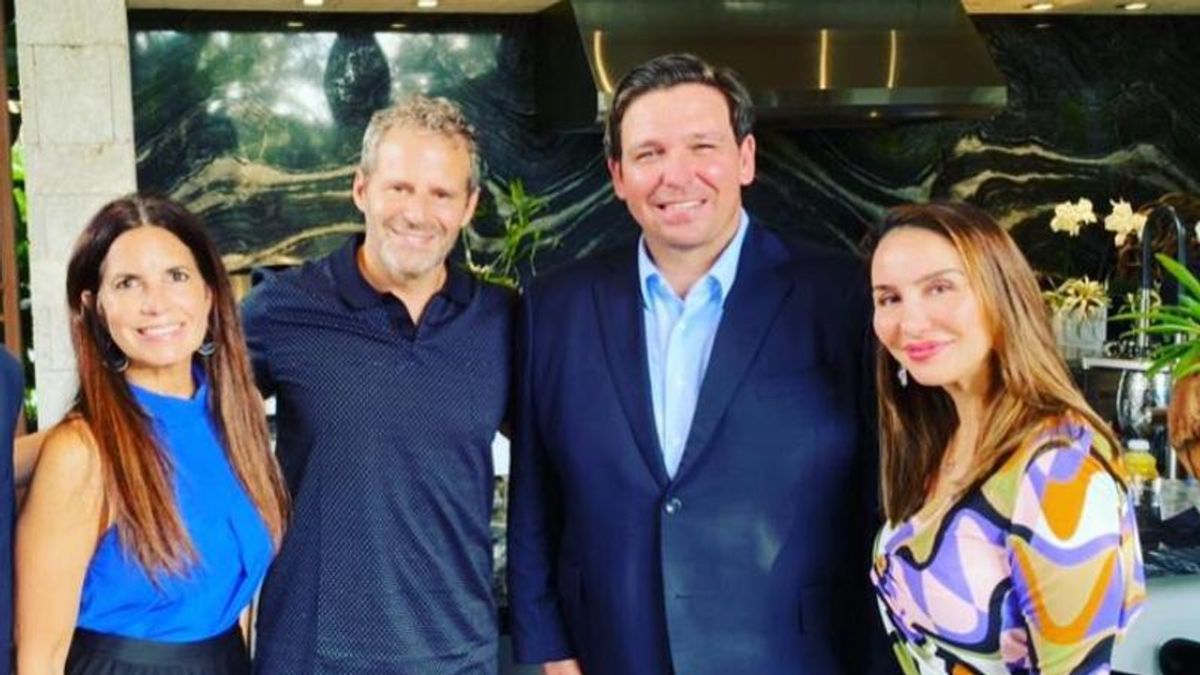 News that founders of a pricey private school in Florida have decided to ban teachers who have been vaccinated with any of the COVID -19 vaccines led the Miami Herald to seek out parents whose kids attend the school to get an idea what goes on behind the doors.

One dad said he's fine with the education his first grader is getting but he has serious questions about the beliefs of the school's high profile founders -- David and Leila Centner -- who are big boosters of former President Donald Trump.

Earlier in the week, Leila Centner issued a statement that vaccinated teachers are not welcome, with the New York Times reporting she claimed, "we cannot allow recently vaccinated people to be near our students until more information is known." A statement was later released explaining, "...that vaccinated people 'may be transmitting something from their bodies' leading to adverse reproductive issues among women,'" for which there is no scientific evidence.

That led to intense scrutiny of the school, with the Herald reporting that from the day the school was founded, some of its policies baffled parents.

"It began with the academy's first open house when David and Leila Centner asked guests not just to wipe their feet but to swaddle the soles of their shoes in Saran wrap. And it continued with an impassioned pledge to mold students into 'emotional ninjas,' and the coverings over the windows to ward off potential radiation from 5G cell towers," reports the Herald's Colleen Wright and Nicholas Nehamas. "Then there were the non-disclosure agreements required of employees who wanted to quit or parents who wanted to withdraw their kids. And the efforts to persuade staff how to vote in the presidential election. And the invitation to anti-vaxxer Robert F. Kennedy Jr. to address the school community. And the constant exhortations against wearing masks."

On her Instagram page, Leila Centner has frequently downplayed the coronavirus pandemic. This week, she claimed that "people are dying in India from starvation due to the lockdowns" rather than COVID-19. "Wake up people!! This is not about Covid!!" she added.

According to parent Greg Tatar, he wasn't particularly surprised by the messages from Leila Centner.

"She was always talking about doctors that seemed fringey. And there were all these weird emails: Are masks really good for youth's mental progress? They screamed Republican, Trump, anti-COVID. All the weird news that you would see between 8 p.m. and 11 p.m. on Fox," Tatar told the Herald while admitting he liked many features at the school.

However, he did state that he found her latest comments more disturbing than usual.

"People believe her because she's in a position of power," he explained. "I really don't want her to fire all the teachers with common sense and keep the teachers that are believing and feeding into this fake science news. ... What she's doing is completely insane and unreasonable and dangerous."

One father of a child who attended the school told the Herald, "She turned the school we all loved into her own conspiracy theory platform."

Former teachers and current parents told the Herald that the vaccine scandal fit into a pattern of behavior by the Centners that they described as straight out of a 'cult.' They said the couple failed to impose adequate health and safety precautions during the pandemic like enforcing the usage of masks and continually spread medical misinformation that bordered on indoctrination," the report states adding that many didn't want to go on the record fearing retaliation.

According to the report, many teachers are afraid to talk about what goes on because they also live in housing provided by the wealthy school founders. One teacher who left after three weeks, explained, "It really felt like a cult ... It still keeps me up at times because it was so disturbing. Leila Centner is single-handedly responsible for forcing people in the Miami community to not wear masks for money and power."

One mother, who claimed she was buffeted by emails from the school linking to anti-mask discussions added, "It's a cult. It's nowhere near a school."

As for the current controversy, the Herald reports, "Last week, Leila Centner sent staff a Google form asking whether they'd been vaccinated. One teacher said she and colleagues spoke to a lawyer about filling out the form. The lawyer said not to do it."

Said one teacher, "It's only 37 more days," before admitting they were leaving the school for good after the school year ends.