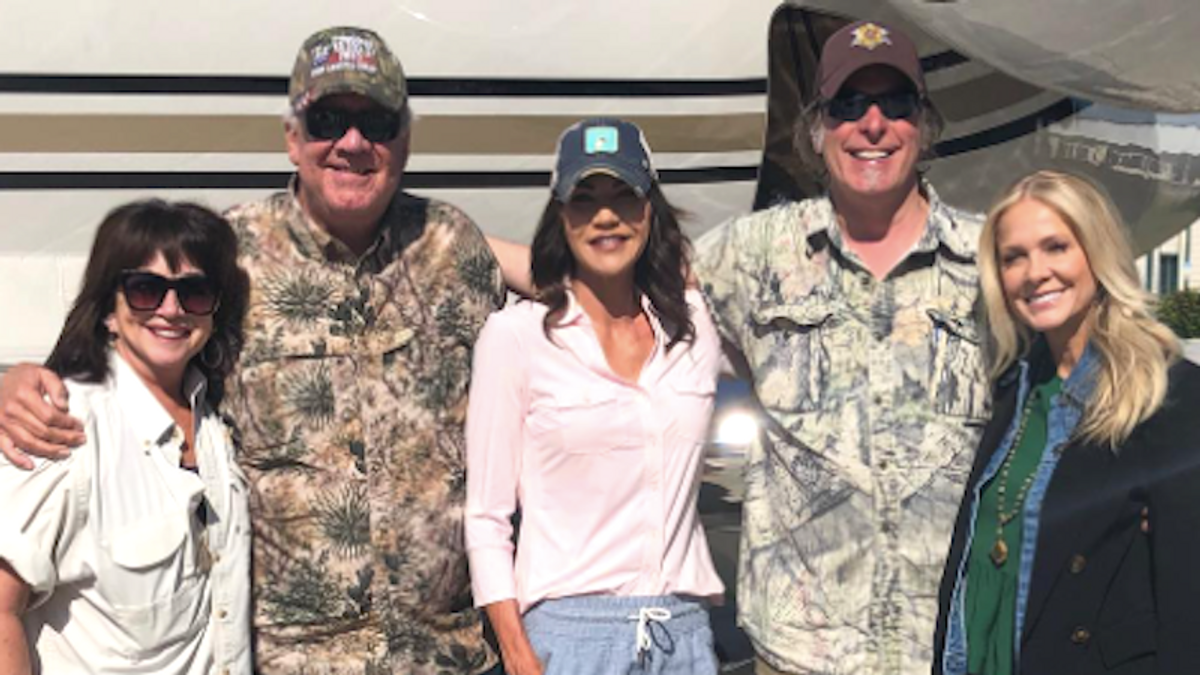 "I have had flu symptoms for the last 10 days," Nugent told fans. "I thought I was dying -- just a clusterf*ck."

A week before that announcement, Nugent's wife Shemane posted a photo of them standing with Neom and Republican donor Greg Mosing and his wife, Donna, alongside a private plane.

"Thank you for a great trip with Governor Kristi Noem, on Rockstar One (think Air Force One!)," Shemane Nugent wrote.

None of them were wearing masks and all of them were crowded together in that April 13 photo, and social media activity and flight logs show Nugent zigzagged across the country while experiencing symptoms from what turned out to be a COVID-19 infection.

Flight logs show the plane, which may belong to Mosing, took off that same day from Naples, Florida, where Nugent had live streamed his visit to the Seed to Table restaurant whose owner vocally opposes mask ordinances and refused to enforce his county's order.

The April 12 live stream showed Nugent hobnobbing with guests and employees, none of whom were wearing masks, and mocking George Floyd's death with Lee County Sheriff Carmine Marceno.

"My name is Ted Nugent and George Floyd killed himself," he said in the live stream video.

Noem, who had gotten her first dose of the COVID-19 vaccine eight days prior, on April 5, was in Florida to address the Republican National Committee's spring donor retreat, where Donald Trump was the headliner.

The governor's spokesman said Noem self-monitors daily, but it doesn't appear that she quarantined herself after returning to South Dakota.

The plane landed two and a half hours later in Waco, Texas, near Nugent's ranch, and then flew on to Pierre, South Dakota, where the governor's mansion is located, before stopping in the Mosings' hometown of Lafayette, Louisiana.

Noem is scheduled "very soon" to receive her second dose of the Pfizer vaccine, which studies suggest may be up to 85 percent effective after a single dose, although it takes about two weeks -- for the governor, this past Sunday -- for that level of immunity to build.

The governor spoke to a crowd of 500 people Tuesday at a prayer breakfast in Aberdeen, where it's possible she could have exposed others if she had been infected by Nugent.