Trump allies are paying the price for backing his election fraud claims: report 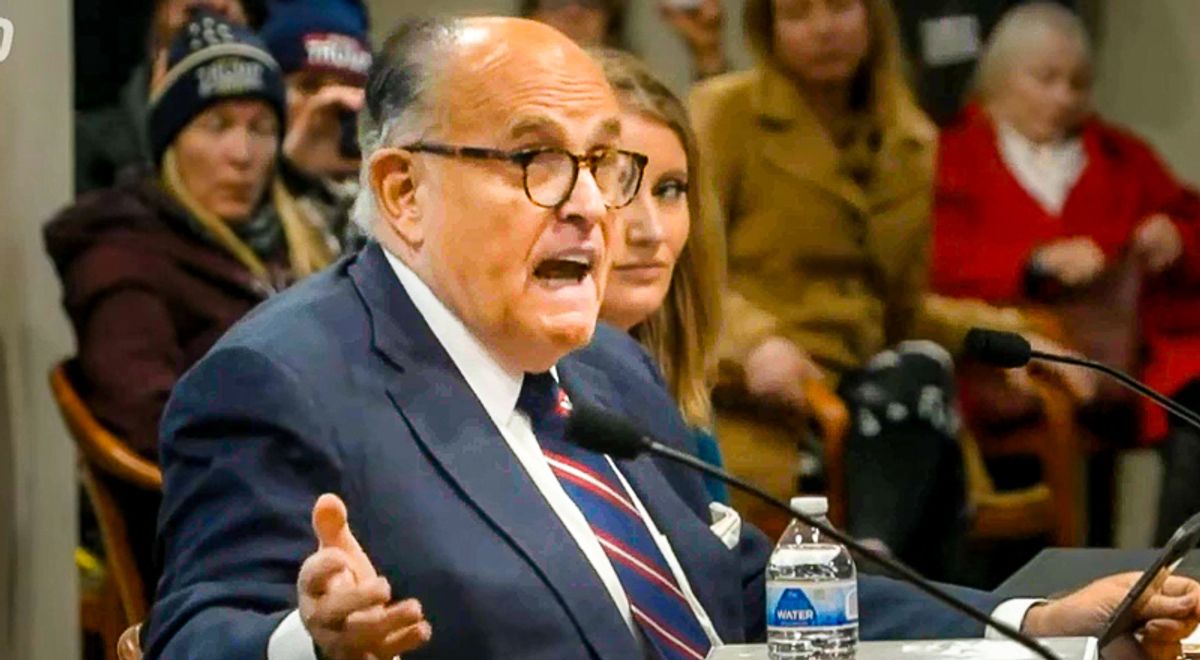 Donald Trump may have been given a pass by Senate Republicans who refused to convict him in his second impeachment trial, but supporters of the president who claim that the 2020 presidential election was stolen from him are now finding out that they have legal problems of their own and are being forced to lawyer up.

According to a report from the Washington Post, Trump faces a host a possible criminal referrals and lawsuits -- and could face a federal investigation into his connection to the Capitol attack on Jan. 6th -- but, so far, he has avoided the legal trouble for claiming election fraud.

The same can't be said for allies of the president, some of whom are facing billion-dollar lawsuits over election fraud claims of their own as well as investigations into whether they tried to meddle with vote totals or legal sanctions for judicial misconduct.

According to the Post, attorneys for the former president are facing fines and possible disbarment for specious lawsuits claiming voter fraud with others facing what the Post calls the "start of what could be a flood of civil litigation related to false claims that the election was rigged and to the subsequent riot at the U.S. Capitol on Jan. 6."

"The goal, according to lawyers and others supportive of such efforts, is to mete out some form of punishment for those who helped undermine confidence in the election results and fueled the Jan. 6 attack on the Capitol. But even more, they said, they hope to discourage other public officials from rerunning Trump's strategy of attempting to overturn an election result by sowing doubt about the legitimacy of the vote," the Post's Rosalind Helderman explained.

According to Philadelphia City Commissioner Al Schmidt, who was on the receiving end of death threats over the counting of the city's votes, "There has to be some consequence for telling these lies — because when you lie to people, they take action based on what they think is true. Because it's such a dangerous new thing that occurred, there has to be some reconciliation. Moving on isn't enough."

While prominent supports of the president, including MyPillow founder Mike Lindell and attorneys Rudy Giuliani and Sidney Powell, have grabbed headlines after being slapped with billion-dollar lawsuits from voting machine companies, other lesser-known supporters of the former president also have legal problems.

"Fulton County District Attorney Fani T. Willis sent a letter this month to various state officials indicating that her office is examining a variety of criminal charges related to 'attempts to influence' the 2020 election," the report states. "In December, Trump called Georgia's top state elections investigator and asked the person to 'find the fraud.' Then, in a recorded phone call in January, Trump pressured Georgia's secretary of state to 'find' enough votes to reverse Biden's win in the state."

Meanwhile, in Wisconson, "lawyers representing the state council of the Service Employees International Union sent a letter to Milwaukee County District Attorney John Chisholm requesting a criminal investigation into whether laws were broken when 10 would-be Wisconsin electors sympathetic to Trump met behind closed doors at the state Capitol on Dec. 14 and tried to appoint themselves as the state's representatives to the electoral college."

The report adds, "In D.C., Judge James E. Boasberg of the U.S. District Court initiated possible sanctions without any formal request. Late Friday, he formally referred Minneapolis-based lawyer Erick G. Kaardal to an attorney grievance committee for an investigation into Kaardal's conduct over a last-ditch lawsuit filed in December seeking to stop Biden from taking office. The suit, in which Kaardal was representing a conservative group called the Amistad Project, was filed against Vice President Mike Pence, both houses of Congress, the leaders of five states and the electoral college — a body that does not exist as a permanent entity."

Additionally over 225 pro-Trump supporters have been charged for a variety of offenses after taking part in the storming of the Capitol on Jan. 6th that led to multiple deaths and massive destruction in the halls of government.