Among the things included in former White House press secretary Stephanie Grisham's new book was the note that former President Donald Trump wanted her to do a "dramatic reenactment" of his call with Ukraine President Volodymyr Zelensky, said an excerpt from the Washington Post.

The call became part of the scandal that led to Trump's first impeachment. The Constitution specifically cites "bribery" as an impeachable offense and Democrats argued that the transcript of the call made it clear that Trump was attempting to bribe Zelensky. 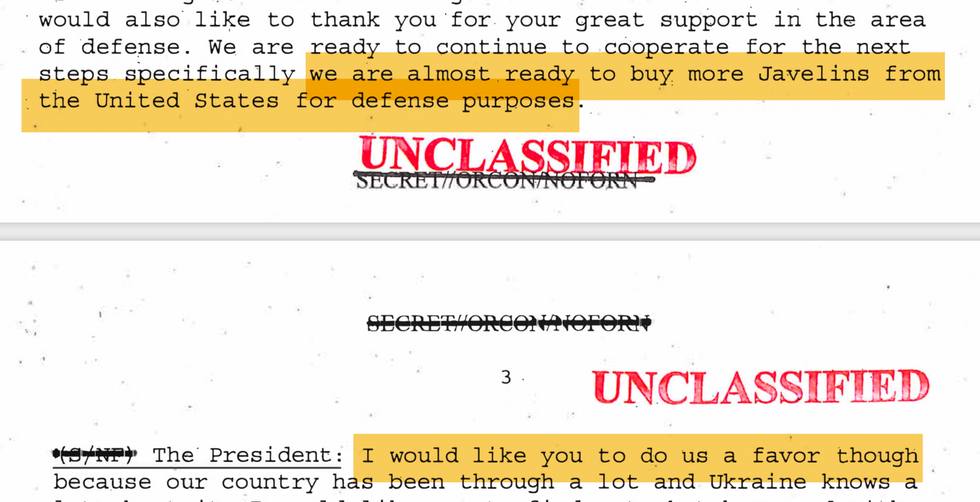 Trump frequently referred to it as a "perfect call" and maintained his innocence throughout the hearings and trial.

According to the Grisham book, Trump was certain that his would be found innocent if his press secretary could perform a "dramatic reading" of the call to the press in the White House press room. Grisham says in her book that she ignored the request.

Former National Security Council expert Alexander Vindman recalled in his book that what was outlined to Trump and what officials had planned for Trump to say in the call with Zelensky never happened. Instead, he went off-script in the call, leading all the way to the first impeachment.

"I will say that we do a lot for Ukraine," Vindman said he heard Trump tell Zelensky. "We spend a lot of effort and a lot of time, much more than the European countries are doing, and they should be helping you more than they are. Germany does almost nothing for you."

Vindman was taking notes of the call while listening in with the rest of the staff. When Trump asked for the favor, he recalled stopping. He recalled that he was "growing more unsettled," but started taking notes again. "the other thing," Trump then said, rattling off the conspiracy about Biden's son. He was shocked.

"My glance around the table confirmed that I wasn't the only one taking in what was happening," the book said. He recalled his new boss, a lawyer, with his eyes darting around to everyone else in the room.