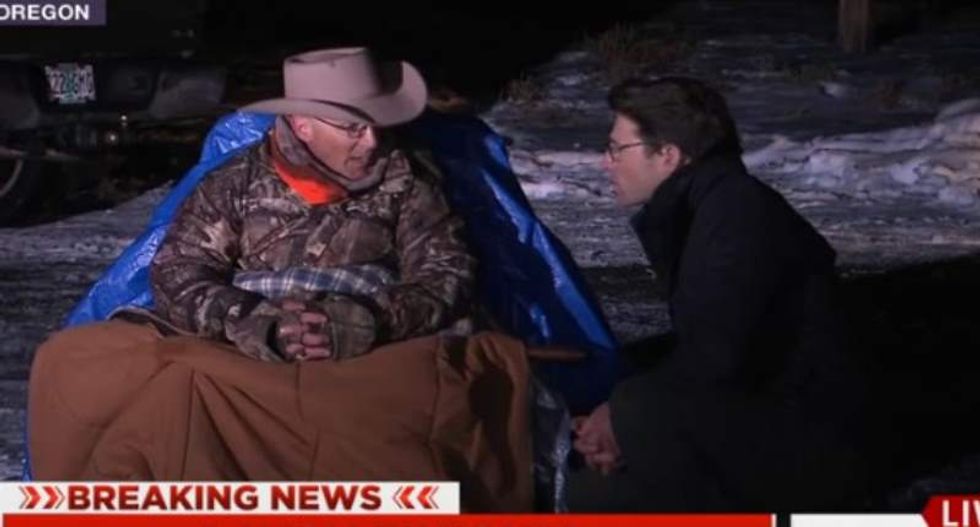 Law enforcement officials have offered some details about the death of Oregon militant LaVoy Finicum -- and they revealed that his fatal shooting was recorded on video.

A law enforcement source described the fatal encounter to CNN, which reported that Finicum attempted to drive away from a traffic stop at high speed before crashing his pickup into a snowbank along U.S. 395.

That matches the account given by 18-year-old Victoria Sharp, who was riding with Finicum, and Mark McConnell, who was riding in another vehicle stopped by police just minutes before the crash and shooting.

But those two witnesses contradict one another in some key details.

McConnell said he spoke to two other passengers in Finicum's pickup, who he said told him the rancher charged at law enforcement officers before he was shot.

Both of those other passengers were arrested and have not publicly spoken about the shooting.

Sharp, however, said Finicum got out of his pickup at officers' request and walked toward them with his hands up while daring them to shoot him.

Now, a third account offers additional, possibly contradictory, details about what happened when Finicum tried to drive around a roadblock and became stuck in a snowbank.

The law enforcement source told CNN that FBI agents and state police ordered Finicum to surrender when he emerged from his truck, which both McConnell and Sharp said was still running and possibly still in gear.

"Finicum reached down toward his waistband where he had a gun," CNN reported, citing unspecified and unnamed authorities.

SWAT officers opened fire at that point, killing Finicum and wounding Ryan Bundy on the arm, the authorities said.

Bundy was riding in the back seat with Sharp and 59-year-old Shawna Cox.

The shooting was captured on video recorded by SWAT officers, and the FBI and Oregon state police are discussing whether to release the video to "counter claims by supporters that Finicum was gunned down while trying to surrender," CNN reported.

No timetable was given for the video's release.

Supporters of the militants who occupied Malheur National Wildlife Refuge for nearly a month have claimed that Finicum died while either kneeling or attempting to kneel in surrender, although even Sharp has claimed he was walking toward officers.

A Grant County man who happened upon the incident places McConnell closer to the scene than the militant leader's bodyguard, who guessed he was about a mile away, did himself.

Dave Hannibal, of Dayville, was stopped Tuesday afternoon by authorities while driving north on U.S. 395, and an FBI agent told him to stop and pull over.

Arun Gupta, who is reporting on the occupation for The Raw Story, was also stopped about that time on the same stretch of road and told that a crash had closed the highway.

Law enforcement officers said they had been watching the militants come and go for weeks, gathering information and evidence, and waited until the group's top leaders left the base together in a two-vehicle convoy.

"They got quite comfortable coming and going," said one law enforcement official. "This was a 'standoff-lite.'"

Authorities knew which route they planned to take to the John Day Senior Center, where they were believed to be plotting a similar armed takeover in Grant County -- and that's where officers set their trap.

Hannibal watched at a distance, snapping photos, as law enforcement officers ensnared the first vehicle and arrested militant leader Ammon Bundy and one of his bodyguards, Brian "Booda" Cavalier.

He said both men were arrested without a fight and sat handcuffed on the highway.

Hannibal said he spotted a second vehicle about a quarter mile or half mile up 395, about 50 feet off the road in the snow.

He said that vehicle's passenger-side window appeared to have been shot out.

Sharp said officers opened fire on Finicum's pickup after he demanded they let him drive on to Grant County to speak to the sheriff, who he considered an ally, and then drove away at high speed.

The teen, who said she and the other passengers dove to the floorboard at that point, also claimed that officers fired as many as 100 bullets at the pickup after killing Finicum -- who would have turned 56 years old the next day.

Hannibal did not mention any other damage to Finicum's pickup, but it's not clear how close he was to that vehicle.

Both Sharp and McConnell were questioned and released after the traffic stop.

Authorities have arrested 11 people in connection with the three-week occupation of the wildlife refuge, although more arrests are expected.

At least three militants are believed to be remaining at the refuge, after three surrendered late Wednesday.

All of the militants who have been arrested were charged with a federal felony charge of conspiracy to impede officers of the United States from discharging their official duties through the use of force, intimidation or threats.