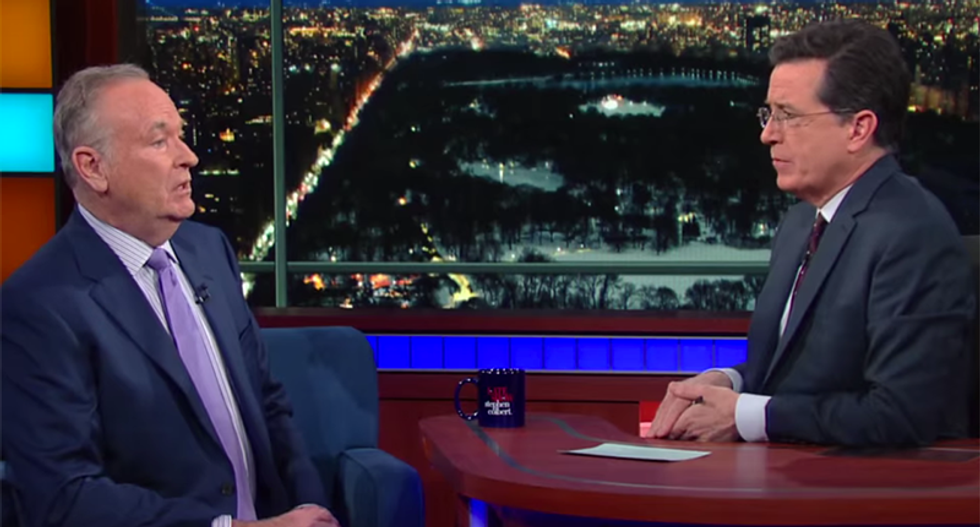 Stephen Colbert has always had a strained connection with Fox News anchor Bill O'Reilly, who he would mock by calling "Papa Bear." For the first time ever, however, Colbert welcomed O'Reilly for an interview not as Colbert the character but as Colbert himself  on Monday's "Late Show." But it took O'Reilly just a few minutes to start swinging insults at everyone from MSNBC to Colbert himself.

Colbert admitted that in the year since leaving Comedy Central he hasn't watched Fox News but was complimentary of O'Reilly's ratings and hard work. However, Colbert acknowledged that everyone with a show works hard, remarking that people at MSNBC aren't seeing their children to bed at night. O'Reilly, by contrast, took it to a dark place, "first of all they're all on crack... You guys didn't know that?" he said asked while the audience booed. "There are a lot of angry people who, they don't write their own stuff. They're in make-up for five hours, like you," O'Reilly said gesturing to Colbert. The audience booed again.

Colbert passed it off as a joke and ignored it, quickly moving on to talk politics and ask about the Rubio Glitch, where Marco Rubio repeated the same phrase over and over again like a robot while Chris Christie mocked him. Colbert said that some are claiming it's the end of his campaign. "Some are calling him a neophyte and that if someone can get rattled and go home to their talking points that hard, that they can't do the job as Commander in Chief."

O'Reilly associated it with the debate where Walter Mondale "clocked" Ronald Reagan and said that anyone can have a bad debate performance but come back from it. He went on to discuss the candidates themselves claiming that Donald Trump and Bernie Sanders, who he predicted would be the winners of New Hampshire, are essentially the same candidates. "They’re both tapping into the anger of the voter who feels they’re getting hosed." On the right it's about the open border and ISIS on the left it is about the one percent.

"This time in history, people want an avenger — they don’t want a politician," O'Reilly explained. "They want somebody to come in and blow the whole system up." He then did such a bad impression of Bernie Sanders that Colbert even asked if O'Reilly was having a stroke. He then accused O'Reilly of having that same anger on his own show. "Yeah, but I'm different," was O'Reilly's only retort.

Colbert then asked if it was a good thing that people are seeking "an avenger" who can necessarily govern or lead. "He's someone who can stir a crowd, but how do you go in there and change things?"

O'Reilly complimented Colbert on the question saying, "it’s good and it’s bad. The good part about it is, it gets people engaged in the political process. Trump himself has performed a miracle by making Americans actually pay attention to what’s happening, so that’s good. What’s bad is, both Trump and Sanders say stuff that’s impossible — it could never happen."

The two went on to discuss O'Reilly's latest book Killing Reagan, where the Fox host could continue the GOP worship of their favorite President. That's when things got a little dicey. "You bring down your major enemy and you have to do it by spending money," O'Reilly attempted to explain.

O'Reilly attempted to blow off the logic as just another "liberal position." Colbert, ultimately, tried to defuse the situation by asking why everyone couldn't just love each other.