Seth Meyers: Is Ben Carson really a brain surgeon — or do people call him that sarcastically? 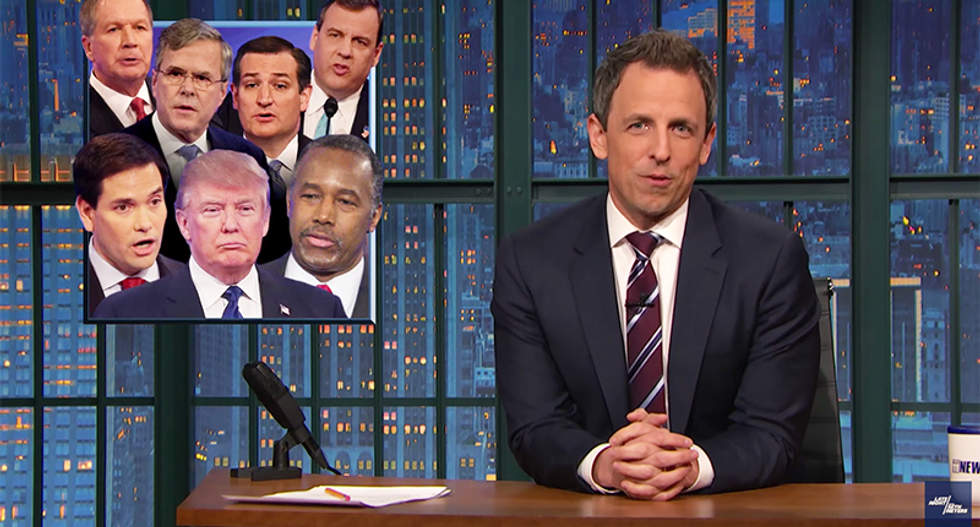 It is just a few short days until the New Hampshire Primary Election and Republican candidates are making their final pitch as to why they are a better option than Donald Trump. Monday evening on "Late Night," Seth Meyers said that, after so many debates, one would assume they would have figured it out by now. Instead, what transpired was nothing more than a kindergarten holiday pageant of candidates confused as to what they were supposed to do.

"Is Ben Carson really a brain surgeon, or did people just start calling him that sarcastically and it just stuck?" Meyers mocked. "Aw, that guy's a real brain surgeon." Meyers wondered what it was like to have him as a doctor, "your surgery will begin any minute we just have to get Dr. Carson in here." Meyers waved with a "come on" gesture.

It was like the rush hour of Republican candidates getting bottlenecked. Like many things in this campaign, nothing is going to transpire without Donald Trump somehow being involved. When his name was called, he too got stuck in the traffic, while Marco Rubio quickly changed lanes to swoop around the two muddled right-wingers. Meyers joked that Trump and Carson standing side by side, confused and alone was reminiscent of the terrifying twins from "The Shining."

Then it was time for the Rubio Glitch, brought to you by Vine. Rubio repeating himself over and over again with the same statement about Obama. He's since tried to play it off like it was somehow a fight between him and President Obama and he refuses to back down. Meyers hoped that if Rubio is the nominee he might pick a gif of Trump as a running mate.

When Bush tried to take down Donald Trump it got even weirder. Trump, who has mocked Bush mercilessly in the debates so far, responded to a charge from Bush about eminent domain by accusing him of being a tough guy and telling him to "shhh." "True story, after the debate Trump used eminent domain to pave over Jeb Bush and use him as a parking lot" Meyers quipped. The audience responded by booing and Trump quickly turned on them claiming they're Bush's special interest donors. Meyers joked that the only thing Trump hates more than the New Hampshire debate audience are terrorists and honestly advocated bringing back waterboarding.

The primary is the last stand for many candidates, but like many things in this race thus far, it is merely a waiting game for Ben Carson.