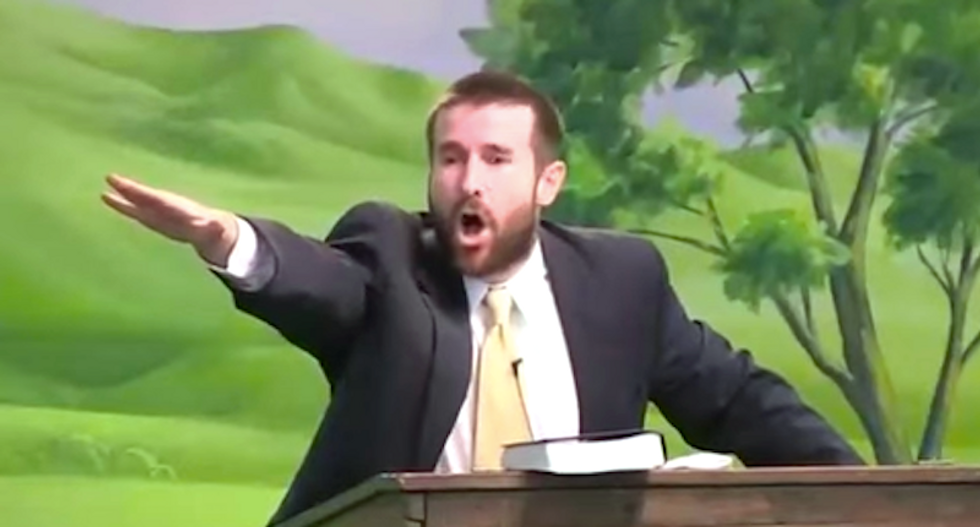 The “Red Hot Preaching” conference scheduled for this coming weekend in Sacramento will feature four of the most repugnant King-James-Only pastors who have more than just their relentless hatred of gays in common ... they’re all Quiverfull. These preachers of patriarchy are Truly True Believers™ who embrace Jim Bob and Michelle Duggar-style “family values” … Christian homeschooling mega-families who reject all forms of birth control and are devoted to raising up a “quiver full” of children to serve as “arrows” in God’s holy war.

Pastor Roger Jimenez, who celebrated the Orlando massacre, saying, “Christians shouldn’t be mourning the deaths of 50 sodomites,” will be hosting a four-day conference of “soul-winning” and “hard preaching” at his church, Verity Baptist, in Sacramento beginning Thursday evening.

Jimenez will be joined by three fellow “fire-breathing” preachers: Steven Anderson, pastor of Faithful Word Baptist Church in Tempe, Arizona, who has advocated for the death penalty for gays and adulterers, Donnie Romero, pastor of Stedfast Baptist Church in Fort Worth, who prayed for the injured survivors of the Pulse nightclub attack to die and who threatened violence against LGBT people, and David Berzins, pastor of yet another Independent Fundamental Baptist church, Word of Truth, in Prescott Valley, Arizona.

When Jimenez and company are not busy condemning “sodomites” and “faggots,” they’re likely to be preaching about a woman’s duty to stay at home, dress modestly, submit to her husband, have lots of babies, homeschool, and always be sexually available when hubby’s in the mood.

For those who might speculate about the connection between hyper-masculine Patriarchs and their rabid hatred of homosexuality, Pastor Anderson’s wife, Zsuzsanna, who recently gave birth to the couple’s ninth child, and blogger at “All They All Yours?” has this rebuttal:

Of course, such logic (or lack thereof) is just not true in any area of life.

Also, why do these people who think being a homo is perfectly normal and acceptable always resort to calling someone a homosexual as their favorite insult?

Conjecture about their secret sexual “sins” is not the only backlash these Quiverfull leaders are receiving. In a recent YouTube video, Anderson scoffs at the “foolish harassment” by “pathetic losers,” which includes shutting down the church's ability to collect online donations, a flood of negative press, and protests which prompted Harsch Investment company to refuse to renew the lease on the property where Jimenez’s church holds its meetings in Sacramento.

“People are trying to silence this kind of preaching. They don’t want hard preaching to continue. … I’ll tell you this much, the Bible said, ‘as it was in the days of Lot, so shall it also be in the days of the Coming of Man, so before the Second Coming of Christ’ … it’s going to be like Sodom and Gomorrah and we see that happening. We see the United States becoming more like Sodom and Gomorrah every day,” says Anderson.

The LGBT community in Sacramento is countering the zealous hatred of the Verity Baptist conference with a “#KissAwayHate” protest rally at the capitol, and there’s also a petition asking the South African Minister of Home Affairs to deny entry to Steven Anderson, who is planning a “soul-winning marathon” in an upcoming mission trip to Johannesburg.

But these four fundamentalist fanatics remain undaunted … in fact, they appear to be energized by the well-deserved criticism which, in their tiny little minds, constitutes anti-Christian persecution.

“I like fighting the good fight. Bring it on! is what I say,” Anderson rants, “And they will never stop me. The only way to stop me is to kill me. And if they kill me, I’ll just be even more popular, I’ll be a martyr at that point. And if they throw me in prison, my preaching will be ten times as popular as it is right now. I don’t care. Do whatever you have to do, Sodomites. Do your worst. I will not stop!”

According to Anderson’s wife, Zsuzsanna, Christian hatred of gays is “biblical”:

The Bible says there is "a time to love and a time to hate." Hundreds of passages talk about hatred that God has for certain things and people, and we are admonished to hate them that hate the Lord: "Do not I hate them, O LORD, that hate thee? and am not I grieved with those that rise up against thee?" (Psalm 139:21)

It is impossible to love one thing, without hating another thing that would harm it. Hate is a natural, normal, healthy human emotion as much as love is. Every person in this world hates something or someone. These same people who condemn us for hating perverted predators sure have hatred for us. Which makes them not only hateful (that's okay), but also hypocritical (that's not okay).

“Hate is a natural, normal, healthy human emotion as much as love is.”

D’fuk, Zsuzsanna? Sure the Bible says that, but … isn’t that a super good reason to ditch the Book? Plenty of us former Quiverfull wives have done it and the only regrets we have is not getting out years ago! Your kids are still young … flee the confines of fundamentalism now before they grow up to hate you and your God for sacrificing their childhood on the altar of fanaticism.