Meyers mocks terrorized Trump: “Are you a presidential candidate or the old lady who lives across the hall from me?” 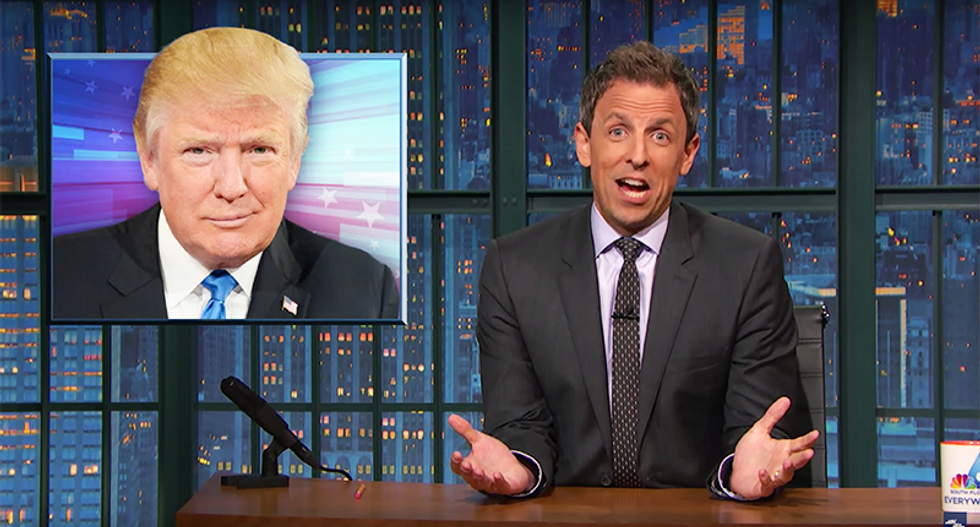 While everyone was doing their job caring for the injured and investigating the New York City and New Jersey bombings, cable news was doing what it does best: Making stuff up. To make matters worse, the king of making stuff up, Donald Trump, weighed in too.

Authorities managed to investigate and find the bombing suspect in a mere 48 hours, and that left a perfect opportunity for CNN, Fox News and MSNBC to speculate on everything they could come up with. "Late Night" comedian Seth Meyers is sick of it and continuing the "War on Bullsh*t."

CNN, for example, came up with many ways to describe the Chelsea area of New York City that was not only wrong but about 10 years outdated, as Soledad O'Brien noted.

Chelsea really isn't a gay enclave anymore. That was kinda 10 years ago. And no @cnn contributor, this is not close to Chelsea Market.
— Soledad O'Brien (@Soledad O'Brien) 1474166689.0

Fox News sought to talk about the dumpster itself. Its size and shape seemed to be particularly concerning. Another CNN reporter talked about a larger police structure driving toward the scene that appeared to have something that looked like lights on top. Riveting breaking news.

"Also there's a traffic light, and I don't know if this is news, but it's going from yellow to red and then back to green," Meyers mocked. "CNN was so desperate for even the slightest development that they even aired a loop of a cop walking up to a trash can and looking inside of it."

Finally, once actual news came out, the best symbol of New York City identity was revealed. Two thieves were responsible for disabling the pressure cooker bomb because they were stealing the rolling suitcase the bomber was carrying the bomb in. When the thieves took the bomb out of the case and discarded it, they unknowingly disabled it.

Once police had a suspect media swarmed the First American Fried Chicken in Elizabeth, New Jersey, to speculate on the details of alleged bomber and his family. "Make of that name what you will," the Fox News reporter said.

"To me, First American Fried Chicken sounds like a bank where you deposit your leftover wings," Meyers joked.

Then there were the presidential candidates. Hillary Clinton offered support and urged patience until further information came to light. Donald Trump, on the other hand, told a rally crowd that just as he was getting off of his plane a bomb went off in New York and no one knows what's happening.

"You can't say the words, 'A bomb went off in New York' if the next thing you say is, 'Nobody knows what's going on,'" Meyers said. "Are you a presidential candidate or the old lady who lives across the hall from me?"

As far as facts go, Trump did get it right by calling it a bomb. "Which means he totally wants credit," Meyers said, before showing a clip of Trump on Fox News doing a victory lap for calling the explosion a bomb before anyone else reported it.

"I don't think you get how being a newscaster works. Newscasters don't 'call the news' before it happens," Meyers joked, before doing an impression of Trump predicting building fires and other disasters, "fingers crossed." The good part of calling it correctly means that Trump will inevitably screw it up. "Every Fourth of July President Trump will probably tweet, 'We're under attack!! Kill yourselves!!'

Naturally, both candidates attempted to use this for political game. Clinton attacked Trump's temperament, "And when asked to defend his temperament, Trump answered by using the word 'win' nine times in less than 15 seconds," Meyers reported. He even said that in sports he "wins." Something the American public has yet to see. "What is he talking about," was all Meyers could ask after Trump's "winning" word salad. "What does that have to do with ISIS? And what sport does Donald Trump win at, anyway? Dude can barely stand up without a death grip on the podium. He uses that thing like Nana uses her walker."

Trump used the attack as an opportunity to call for profiling and a ban on refugees. "But I think Trump could have learned a thing or two from actual New Yorkers, who showed just how calm they can be in the face of crisis," Meyers said. "You know what New Yorkers did the day after the bombing? They got on trains with Muslims. They rode in cabs with Muslims. They were protected by Muslim police officers. They worked and played alongside Muslims. Because New Yorkers know that Muslim and terrorist are not synonyms. Kind of like Trump and presidential."