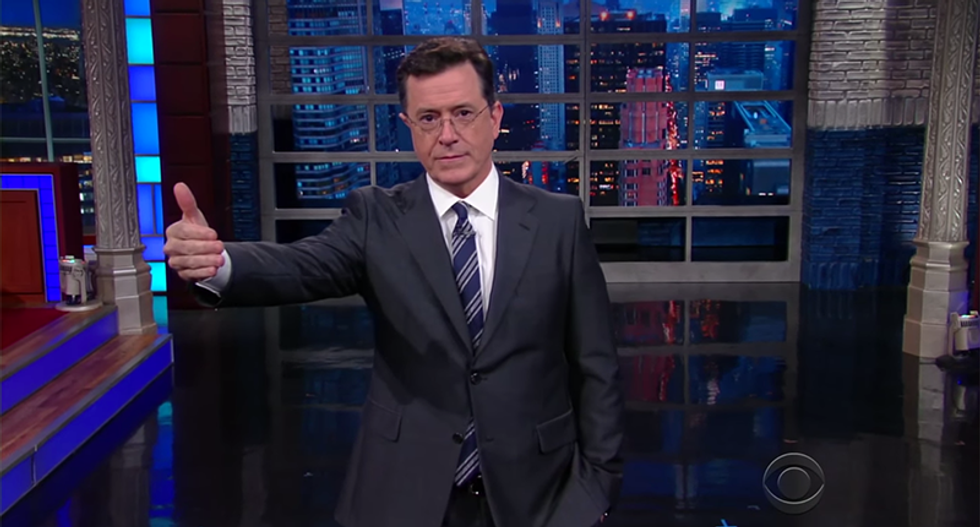 Comedian Stephen Colbert typically begins "The Late Show" with a short stand-up routine that digests the day's news into jokes and silliness that makes the world laugh. Tonight, the funny man went a more serious route.

"The news for the last 24 hours has been pretty bad," he said with a disappointing look. "Angry people in the streets, some of them in riot gear. And the governor of North Carolina has declared a state of emergency in Charlotte. The shooting of African Americans by police officers and the community outrage that follows seems to keep happening over and over again no matter how many times we do nothing."

Colbert admitted that in times like this it's always difficult for him to know what to say. "But it's easy to know what not to say. Unless you're USA Today columnist and psychic you hired from craigslist, Glenn Reynolds," Colbert turned to outrage.

Wednesday evening Reynolds tweeted a photo of protesters using the caption "run them down." 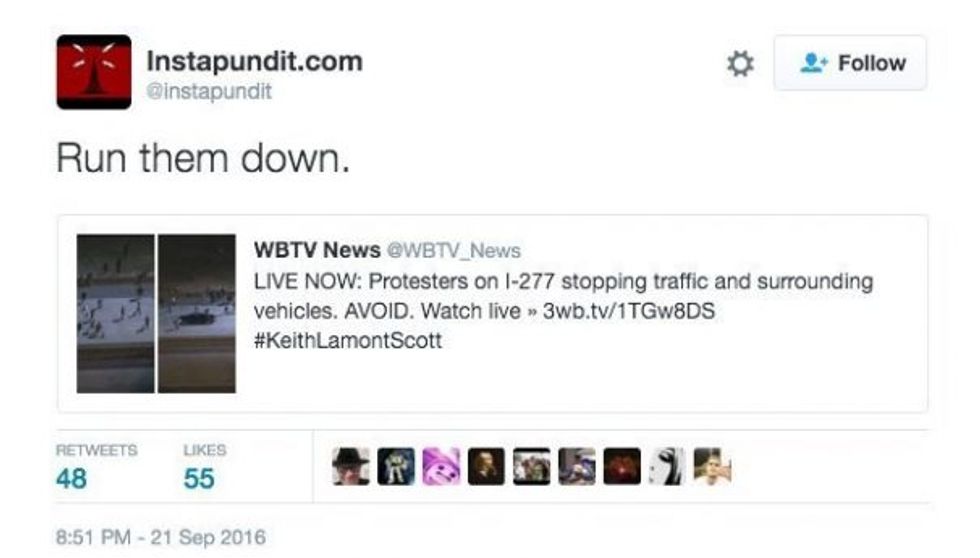 "Wow," Colbert said, after the audience reacted with gasps. "That is such a terrible tweet that it made USA Today's worst tweet infographic."

Protests turned violent last night and another person was shot, though protests Thursday have been calm. "I just wish there was some sort of respectful, silent, civil protest that people could engage in that wouldn't enrage the other side," Colbert began. "Yeah, nope, that's not gonna work either," he said, referencing NFL player Colin Kaepernick's silent protest. He noted that since the protest Kaepernick has become the most disliked player in the NFL.

"Well, in the face of continued heartbreaking racial strife, all eyes turn to civil rights icon, the Reverend doctor Donald Trump," he pivoted, as the audience laughed."Yesterday, Reverend Trump reached out to the black community at two events in Ohio. Both were at black churches."

Colbert then went on to clarify that one event was actually a black church filled with white people while Trump was discussing black America. "I haven't seen so many white people replacing black people since... Brooklyn? Last night, in a town hall, Trump offered a solution to black on black violence."

He played a clip of an audience member asking what Trump would do about the topic. Trump said that he believes in the practice of "stop and frisk" that former New York City mayor Rudy Giuliani started, allowing police to profile people, stop them, and frisk them. The law was ultimately shot down by a federal court as being an example of racial profiling and a violation of the Constitution and racially discriminatory.

"That's a bad idea," Colbert said about Trump's latest idea. "Not only has it been found Unconstitutional, if Trump's doing the frisking, it'll take him hours with those tiny hands."

"That's right, there was no racism until Barack Obama was elected! Martin Luther King didn't just have a dream, the whole thing was just a hallucination! An illusion!" Colbert mocked. "By the way, look at the interviewer's reaction to what she's saying," he said showing a photo. "Yeah. that has to be the world's worst 'that's really racist' poke."

"Miller thinks she knows the root of the black community's problems," he said before showing a clip of Miller saying unwed mothers were the problem. "Shameful-- unwed babies! Babies who aren't married! You should always marry your baby to another baby on the day it's born. That way, they always remember their anniversary because it's the same as their birthday! come on!"