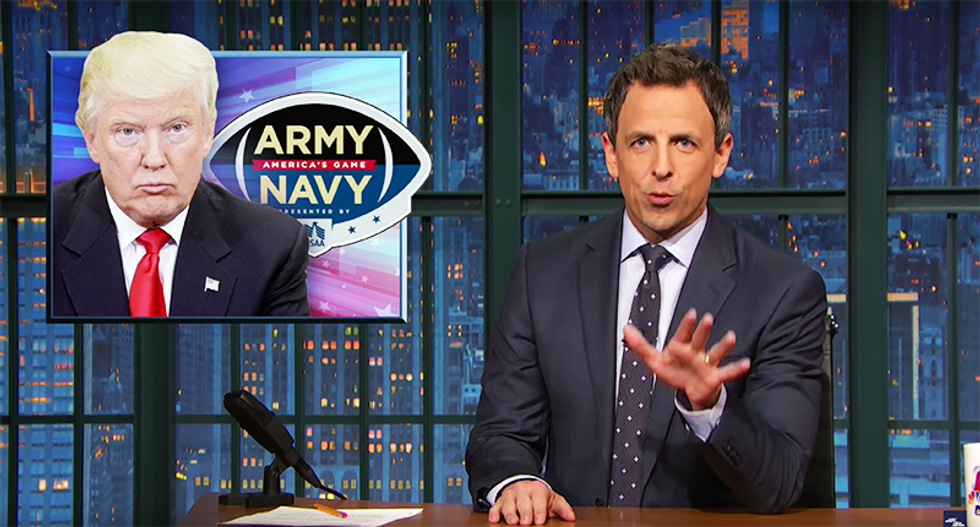 Without even taking office yet, President-elect Donald Trump is already in a war. This time, however, the war is with the Central Intelligence Agency and many other intelligence agencies within the federal government.

News over the weekend has now gone uber-viral with the Washington Post and the New York Times revealing that Russia helped Trump win the U.S. election.

"Late Night" host Seth Meyers wondered how anything that Russia found in the RNC emails could have possibly been more embarrassing than what their nominee was already saying out loud on the campaign stump. "Donald Trump is a hacked email come to life," Meyers said. "'Did you hear? Donald Trump made fun of the disabled!' 'In a private email?' 'No, into a microphone in an arena.'"

The RNC claims that it was not hacked, which is under dispute, but Meyers wondered why Trump wasn't taking these findings seriously since he'll need to rely on these intelligence agencies as president. Instead, Trump chose to slam the CIA in a statement "I can only assume came directly from him," Meyers concluded. It read as nothing more than blowing off intelligence, claiming that they weren't credible because weapons of mass destruction weren't found in Iraq. The intelligence community, of course, accused the Bush administration of pressuring them to find WMDs in Iraq, and CIA operative Valerie Plame was outed by Bush administration officials in retaliation.

Trump also took credit for winning in one of the biggest electoral victories, which was also not true — and Meyers was quick to point out. "It actually ranks 46th out of 58 presidential elections," he cited. "To put that in Sunday cable TV ratings terms, Trump's not the 'Walking Dead,' he's the 'Barefoot Contessa.'"

During the campaign, Trump also cast doubt on the Russian hacks. In the debates, he suggested that it could have been China or "lots of other people," including some fat guy sitting "on their bed." In his interview with TIME magazine, Trump claimed that it could be "some guy in his home in New Jersey." The description prompted Meyers to wonder if Trump was "actively trying to frame Chris Christie."

Meyers explained that it's important to take anything like this with a grain of salt, "which is why we need an investigation and all the evidence to be made public," Meyers said. Still, Trump continues to reject any of the intelligence community's findings, despite being told in his own intelligence briefings that Russia was likely behind the DNC hack.

Not only has Trump refused to believe anything in the briefings, he's now refusing to even attend his briefings more than once a week. In a Fox News interview with Chris Wallace, Trump explained that he only takes the briefing when he "needs it." He claimed it's because he's, "like, a smart person." Meyers explained, the statement pretty much disproves itself. "It's like getting a back tattoo that says, 'I make good decisions,'" he said.

Meyers then showed a series of interviews with Sean Spicer and Reince Priebus, both of whom seemed a little defensive.

Trump could very easily end this whole ordeal by denouncing Russia and any involvement or by demanding transparency and an investigation. But Meyers explained that Trump's "affection for Vladimir Putin" makes him unwilling to quit the bromance.

Trump's Secretary of State pick is also causing difficulties. Exxon Mobil CEO, Rex Tillerson, was once awarded the Order of Friendship, which is one of the highest honors Russia gives to foreign dignitary. Even Republicans are concerned about Tillerson's ties to Russia. However, Kellyanne Conway explained that it isn't as if Tillerson is "pounding down vodka with Putin."

Sen. Lindsey Graham (R-SC) took his concerns even further, threatening to "have some talkin'" if Trump nominates Tillerson. Meyers warned that this should be Trump's largest concern of all. "That's right, sassafras," Meyers said, impersonating Graham. "You better park your biscuits in that chair, because we're going to have some southern-fried talkin.'"

Closing the segment, Meyers warned that we're entering a "potentially dangerous" presidency. "With a weird affinity for authoritarians and dictators, appointing plutocrats to his cabinet and fighting with America's own intelligence agencies," he said. "I don't see how Trump could get away with all of this. Unless he finds a way to distract us all for the next four years." He then showed a clip of Trump asking a crowd of people who among them wanted a "Make America Great Again" hat.

Check out the clip below: