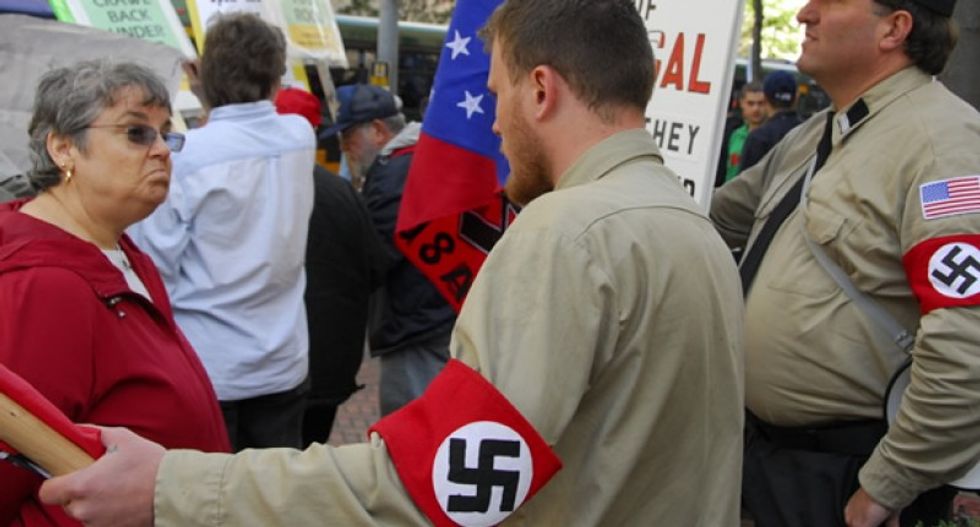 Leaders in the right-wing white supremacy movement are threatening President-elect Donald Trump if he plans to abandon their efforts to influence his administration.

According to The Guardian, activists are concerned the so-called "alt-right" will remain on the fringe of the Republican Party instead of having a seat at the table.

“Their hearts are bigger than their brains,” said Mark Weber of the Institute for Historical Review. His organization is dedicated to exposing so-called “Jewish-Zionist” power. “Saying they want to be the intellectual head of the Trump presidency is delusional.”

Jared Taylor, who runs the magazine American Renaissance, a self-described "race-realist" publication, said that Trump initially promised his supporters that every undocumented person would be sent back. "Now he is waffling on that," Taylor lamented.

Holocaust revisionist David Cole fears the movement will devolve into squabbles, in-fighting and online trolling instead of working to shape American policy.

“In January Trump will start governing and will have to make compromises," the Taki magazine columnist wrote. "Even small ones will trigger squabbles between the ‘alt-right.’ ‘Trump betrayed us.’ ‘No, you’re betraying us for saying Trump betrayed us.’ And so on. The alt-right’s appearance of influence will diminish more and more as they start to fight amongst themselves.”

Peter Brimelow is the founder of Vdare.com, a site that claims Mexicans are working to remake the United States. He thinks that if Trump can't deliver “important bones” a backlash will happen could. “I think the right of the right is absolutely prepared to revolt. It’s what they do.”

Last month, a crowd of white supremacists gathered not far from the White House and were captured chanting "heil Trump" while giving a Nazi salute.

Taylor, who spoke at the conference, was disappointed by the display. “It was going very well until [then]. Richard Spencer has said that the way he closed the talk was meant as pure irony, and I hope that’s the case, that it was all ironic and over-exuberance. I don’t think that anything that has any whiff of Nazism is a particularly effective way to bring Americans or even Europeans to an effective understanding of race.”

Brimelow said that they weren't there to look for jobs in Trump's administration.

"These are not party loyalists," he explained. "They know they’re entirely outside the establishment consensus. And they’re used to guerrilla warfare.”

Cole said Spencer, who was speaking at the time, overreached. “He blew a lot of goodwill ... and became an embarrassment to some of his own people.” He said Spencer and the supporters will pay big for it.

“They’ll burn out. After Trump’s victory they had a belief they were behind it, or had a lot of clout," Cole continued. "All they can hope for is to get something on the immigration reform/restrictions. Otherwise they’re enjoying the bragging rights, saying they won it, even though they didn’t.”

Those supporting Trump's message against immigration and Muslims found a kinship with the candidate whose campaign claimed to have accidently used anti-Semitic and racist imagery. Trump pledged to build a wall along the US/Mexico border, institution a Muslim registry, deport 11 million undocumented people and appoint far-right judges to the Supreme Court. He hired Steve Bannon, who turned Breitbart News into a platform for white nationalists, as a senior advisor to the president.

Taylor thinks the far-right, as well as liberals, were easily swayed by the media's bias. “Donald Trump was never a racial dissident of the sort that I am. He was never one of us. He’s an American nationalist. The left was wrong to think that he was dancing to the tune of people like myself.”

He thinks the alt-right needs to practice patience. “Racial nationalism has not triumphed in America. It will some day. But to think it has done so [already] is delusive.”