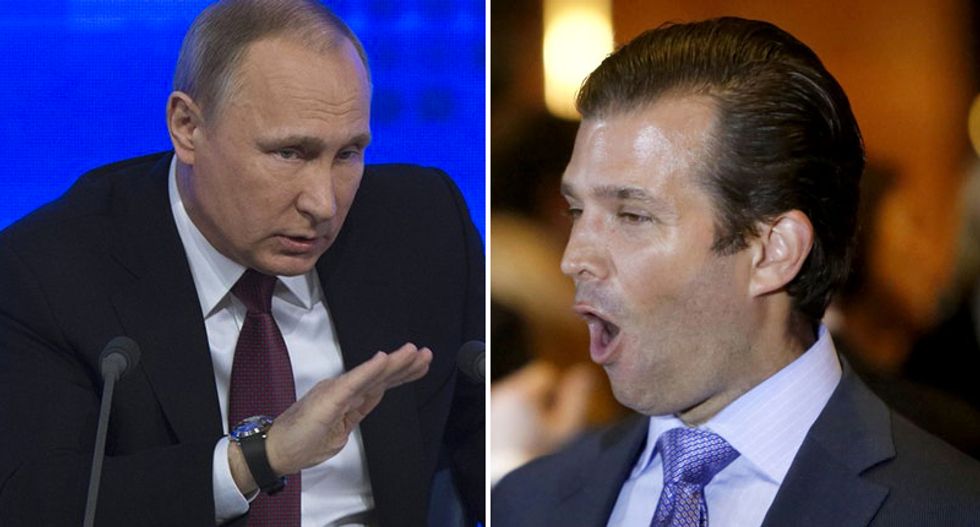 In a Monday New York Times expose, it was revealed that Akhmetshin has an association with the Russian spy agency the FSB as well as a history of working for Russian President Vladimir Putin's allies. Akhmetshin also helped unmask what might be a corruption problem that caused problems with troops at a Kyrgyzstan air force base, where Russians would like American's removed. He's even helped Russian business tycoons who coincidentally suffered sophisticated hacks. In a separate incident, Akhmetshin got federal prosecutors to bring charges against an American businessman that turned out to be a CIA agent working in the former Soviet Union.

Law enforcement officials told The Times that there is a 20-year history of complicated government meddling and of all meetings at Trump Tower, Akhmetshin has the deepest dies to Putin spying. The 2016 meeting was organized by the same Russian businessman who directed his messenger to set up the famous meeting between the Trump campaign and the person promising "dirt" on Hillary Clinton. Akhmetshin was a last-minute addition to the meeting.

When Akhmetshin met with Bob McNamara, who previously worked on the United States Commission on Security and Cooperation in Europe, he said that the Russian alluded to being involved with Russian intelligence.

“My understanding was that he had come from the security agencies in the Soviet Union-Russian Federation,” McNamara told The Times. “He did not make it a secret.”

In a text message last month, however, Akhmetshin swore he wasn't a spy.

“I am the target of a well-coordinated and financed smear campaign,” he said.

When a Republican political operative who has worked with Akhmetshin for more than 15 years was asked about the man, the answers seem just as vague.

The more important stories from Akhmetshin’s professional history come from the two billionaires, who infiltrated the computers of their adversaries. The hacking of the Democratic National Committee took place less than a week before the meeting at Trump Tower, though Akhmetshin said he had nothing to do with it.

The first incident of hacking has not previously been reported, The Times claimed. Akhmetshin was working for an alliance of businessmen headed by Suleiman Kerimov, a Russian businessman, investor and politician close to Putin. He was in a dispute with Ashot Egiazaryan, a competitor. In 2011, Egiazaryan’s lawyers got suspicious emails that prompted them to hire forensic experts, which revealed spyware within them. They fed traceable documents that were opened by computers registered to an office park of Kerimov’s company.

Scotland Yard investigators looked through the hack for over a year but never found enough evidence to bring charges.

Former FSB deputy Viktor Ivanov traveled to Washington in Oct. 2010 to take part in a program to combat drug trafficking in Afghanistan. Akhmetshin was the one tasked with hosting the man and help facilitate the visit. In the lawsuit, Akhmetshin said he was in email contact with Ivanov about "narco-trafficking terrorism in Afghanistan" but also "surveillance of undercover agents, suspected undercover agents and their identities.”

Akhmetshin was spotted in Afghanistan wearing a beard and skullcap to blend in and two former American officials said the U.S. didn't hire him.

The counternarcotics coalition was disbanded in 2014 when the U.S. imposed sanctions on Ivanov and others close to Putin after the invasion and seizure of Ukraine’s Crimea region.

Prior to the invasion, Akhmetshin told reporters he sought a consulting contract with the political party of Viktor F. Yanukovych, the pro-Putin president. It was in that same interview he admitted to a longtime business relationship with Paul Manafort, who was working as a high-paid consultant to Yanukovych at the time. Manafort was recently raided by the FBI.

Yet Manafort's spokesman claimed, “Paul doesn’t know and hasn’t worked with the man.” A strange claim since Akhmetshin took on a $240,000 contract to amend the Magnitsky Act. During the meeting in which the Trump campaign was promised "dirt" on Hillary Clinton, the topic of conversation was the Magnitsky Act.

A spokesman for Putin and Dmitry Peskov claimed they didn't know anything about Akhmetshin.