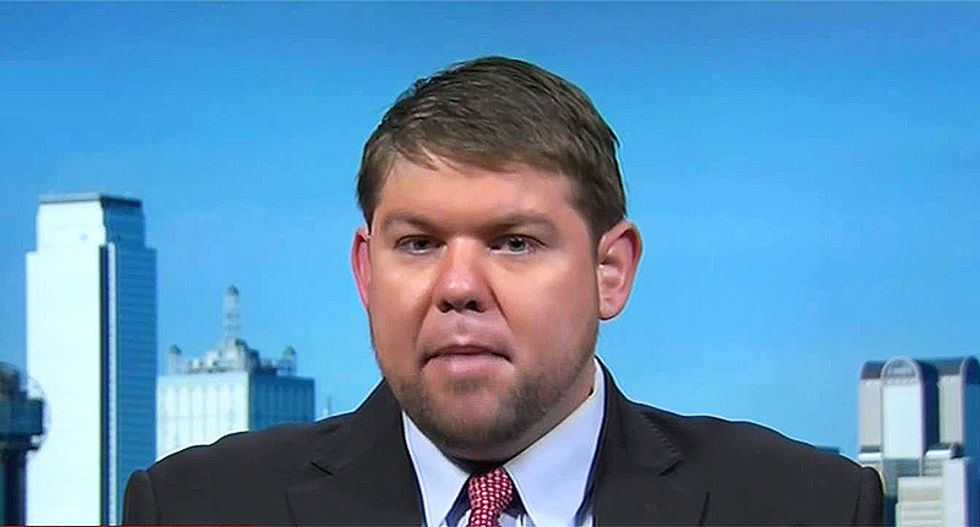 In an early morning news panel about the four Green Berets killed in an ISIS ambush in Niger, conservative Ben Ferguson seemed to indicate it was President Donald Trump who was the real victim of the media.

During a press conference Monday, Trump claimed that he hasn't called the families of the four soldiers killed because it's traditionally not done. That was so far from the truth that the internet exploded with photos of past presidents on both sides of the aisle calling families or standing at Dover as their bodies came off of planes.

Ferguson explained that Trump's response was a reflex because "he was on the defense as if there was a criticism of him." The White House later was forced to "clarify" Trump's response saying that Trump was told "they did not always call."

"Lying has become a favorite past time," said Jenn Psaki "I worked for [President Barack] Obama for eight years, and not only did he call the families, he welcomed gold star families to the White House, and he visited Walter Reed every month, and visited Dover and welcomed and honored the bodies of fallen soldiers. I would ask whether President Trump is doing any of those things. Honoring soldiers or military and families is part of what we focused on nearly every single day. I know that was the case for President [George W.] Bush as well. It's disheartening and I find it pathetic. We did not publicize all these visits, and neither did Bush or his predecessors."

Ferguson did notably say that the sad part of the story was that this has distracted from the deaths of the soldiers themselves. Earlier, CNN co-host Chris Cuomo called Trump's comments a "fog" and "distraction" from the fact that Americans still don't know how these men died. Pentagon correspondent Barbara Starr also said that it's unknown why the body of one of the men lay on the battlefield for two days before being retrieved.

"I think the president's point is, 'Look, I was going to contact them and I wrote letters over the weekend, and not every single time a soldier passes away in action do presidents call them,'" Ferguson tried to explain. "Unfortunately, this has turned into a political talking point."

Co-host Alisyn Camerota wasn't buying it, saying that it was Trump that caused this problem and this distraction by blaming his inaction on past presidents.

"He did that by throwing his predecessors under the bus," she said.

Ferguson tried to recall what the White House clarification was, but Camerota wasn't buying it.

"You are trying to come up with the logic of why he would say that," she cut in. "Why, when he is criticized, he will throw past presidents under the bus like that?"

Ferguson said that if you compare the soldiers that died under the Bush and Obama administrations it was a lot of soldiers, so clearly they couldn't call every single family.

Psaki cut in to say that was why she was so shocked. Previous presidents had thousands, while Trump has had four, and still couldn't manage it. Instead, Trump made it about him, claiming it was "hard" for him to do.

Ben Ferguson explains Trump is the real victim... by sarahburris